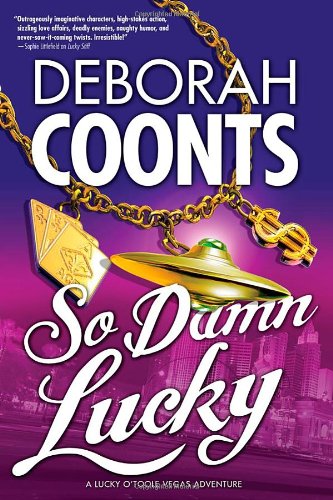 “Fans of quick-paced, lighthearted cozy mysteries will cheer for Lucky’s sarcastic wit and the glittering thrill of her oddball world where crazy is just an everyday fact of life.”

Las Vegas prides itself on having something for everyone. In keeping with that promise, Lucky O’Toole’s third lively outing (Wanna Get Lucky? and Lucky Stiff) offers a full roster of the wacky and weird—along with a heavy dose of romantic frustration.

As the Head of Customer Relations for the Babylon, one of the most decadent megaresorts on the Las Vegas Strip, Lucky is the go-to person for solving guest problems: “anything from an unplanned marriage, or an unexplained rash, to a wife and kids given a room on the same floor as the mistress’s suite.”

As Halloween approaches, Lucky’s responsibilities include updating the old Athena hotel and keeping track of a Bondage Ball, a UFO-ologist convention, and a gathering of squabbling magicians.

Normally this wouldn’t be any trouble for our resourceful heroine. But she hasn’t heard a word from her beloved boyfriend Teddie, a former female impersonator now touring Europe as the piano player for a bombshell pop singer—though Lucky’s surrounded by sexy guys who’d be more than happy to step into Teddie’s place.

Plus, The Big Boss at the Babylon (who’s also her biological father) and her middle-aged mom, (owner of the self-described Best Whorehouse in Nevada) aren’t speaking again—and Mom just found out she’s pregnant. Is it any wonder Lucky’s a little distracted?

Then magician Dmitri Fortunoff dies onstage while attempting to duplicate an infamous Houdini escape—but Fortunoff’s body disappears on the way to the hospital. Another magician, the Great Danilov, may know what really happened, but now he’s disappeared as well. It may have something to do with a secret psychic research program at Area 51. But Crazy Carl Colson, the only guy left from the original program, has gone into hiding in the storm drain tunnels beneath the city. And now someone’s leaving death threats in Lucky’s apartment.

If Lucky’s going to uncover the truth, she’ll need more than a little luck of her own in this cheerful, brisk-paced Vegas thriller. Although the threads don’t quite add up, with characters and subplots popping in and out like rabbits from hats, they hold up well enough.

Fans of quick-paced, lighthearted cozy mysteries will cheer for Lucky’s sarcastic wit and the glittering thrill of her oddball world where crazy is just an everyday fact of life.