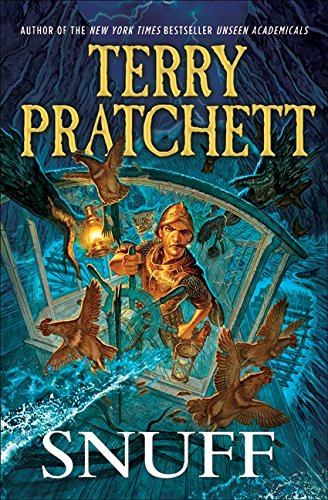 “A Discworld book is not simply a publication, it’s a universally celebrated event. And my goodness, what an event we are invited to in Snuff. Powerful and unpredictable, this is Terry Pratchett’s masterpiece. When we look back at all the Discworld books he has given us, this is the one we will remember him for.”

For almost 30 years, Terry Pratchett has captivated millions of fans worldwide with his irreverent and hilarious Discworld, a universe remarkably similar to our own, except totally different. Discworld consists of a large disc (complete with edge-of-the-world dropoff and consequent waterfall) resting on the backs of four huge elephants which are in turn standing on the back of an enormous turtle named Great A’Tuin (similar to Chukwa or Akupara from Hindu mythology) as it slowly swims through space.

The Disc has been shown to be heavily influenced by magic and, while Mr. Pratchett has given it certain similarities to our Earth, he has also created his own system of physics for it. First in the series was the critically acclaimed The Color of Magic, telling the story of the cowardly wizard Rincewind. Since that amazing debut, he has peopled Discworld with outrageous characters and fabulous creatures.

Snuff’s leading character is Sam Vimes, highly respected commander of the Ankh-Morpork City Watch. At long last, Lady Sybil has lured (browbeaten) her husband on a well-deserved holiday away from the crime and grime of Ankh-Morpork.

The good lady thinks that by going on vacation she will have Sam all to herself. But for the commander, a vacation in the country is anything but relaxing. The stench of fresh air and cow dung is enough to send him overboard, if he were on a ship instead of dry land (for now). In fact, he would much rather drill holes into his head with a rusted stake than being here, walking between weeds and leaves and listening to the annoying sound of birds signing from every tree. Even the mundane pub holds horrors for him:

“Vimes could look out of the front pub windows. Regrettably, the pub was that most terrifying of things—it was picturesque. Which meant that windows consisted of small round panes, fixed into place with lead. They were for letting light in, not looking out of, since the light was bent so erratically that it nearly broke.

“One pane showed what was probably a sheep, but which actually looked quite like a whale, until it moved, then it became a mushroom. A man walked past with no head—until he reached another pane, and then the head had one enormous eyeball. Young Sam would have loved it, but his father decided to give eventual blindness a miss, and stepped out into the sunshine.”

Yet a bored policeman will find a crime anywhere if he decides to look hard enough, and it’s not long before a body is discovered; Vimes—now out of his jurisdiction, out of his element, and out of bacon sandwiches (shock, horror) and occasionally snookered and out of his mind—must rely on his instincts, guile, and street smarts to see justice done.

As he sets off on the chase, though, he must remember to watch where he steps. This is the countryside, after all, and the streets most definitely are not paved with gold. Bullshit, anyone? Before Vimes can get any information on what’s going on in the country his informant disappears and the local constable shows up at his house and accuses him of murder.

Vimes’ motto is simple, if somewhat complex: where there’s a crime there must be a finding, there must be a chase and there must be a punishment. Unfortunately for Vimes there are many, many bodies to encounter, and an ancient crime more terrible than murder will also come knocking on his door.

When Vimes finally finds out what’s happening, he has to overcome country bumpkins, smugglers, murderers, and the filthy rich. But can he do it in time to save the weak and defenceless goblins from being smuggled and sold into slavery, or will they be lost forever? For Vimes to win he will have to accept help from people and things that he despises.

They say that in the end all sins are forgiven. Perhaps not quite all . . .

A Discworld book is not simply a publication, it’s a universally celebrated event. And my goodness, what an event we are invited to in Snuff. Powerful and unpredictable, this is Terry Pratchett’s masterpiece. When we look back at all the Discworld books he has given us, this is the one we will remember him for.