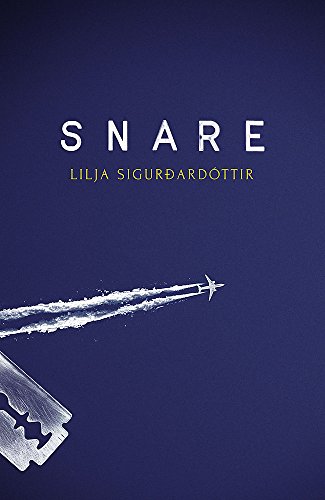 “Thriller of the year.”

Set in a Reykjavik covered in the dust of the Eyjafjallajökull volcanic eruption, Snare is the first in a Noir trilogy by newest Nordic sensation, Lilja Sigurdardottir.

After a messy divorce with her cold-as-ice husband Adam, attractive young mother Sonia Gunnarsdottir is struggling to provide for herself and keep custody of her son, Tómas. Things become complicated when Sonia embarks on a relationship with Agla, a woman uncertain of her sexual orientation and love of Sonia, yet filled with guilt for the very same reasons. Once a high-level bank executive, Alga is currently being prosecuted in the aftermath of the Icelandic finical crash. To add a darker edge to the relationship, Alga is a former colleague of Adam.

With her back firmly against the wall, Sonia resorts to becoming a mule, smuggling quantities of cocaine into Iceland, but soon finds herself caught up in a ruthless criminal world run by callous thugs and drug dealers, Thorgeir and Rikhardur, in which life is cheaper than the dope she is smuggling.

Believing after her latest inventive success of bringing cocaine into the country, will also be her last delivery, Sonia soon finds out there can never be a “last delivery” in the lucrative world of dope and its dealers. Each new delivery hereafter will increase in weight and risk, and just in case Sonia is having second thoughts about her actions, her son goes missing, abducted by one of the dealers.

As she desperately looks for a way out of her predicament, she must pit her wits against customs officer Bragi, a pivotal character in the story who soon becomes her nemesis.

Bragi is a dedicated customs officer, whose years of experience helps frustrate the smartest of smugglers. His life centers around his job and his ailing wife, Valdis, a sufferer of dementia. Valdis is currently staying in a so-called care home, and this has filled Bragi with frustration but mostly guilt. Even when he notices bruises on his wife’s body, he reluctantly accepts the official version that the blood-thinning medication she is taking is the cause of the marks, in case the care home’s owners demand Valdis be removed, forcing Bragi to take care of her at home, something he is not financially capable of doing unless his fortune should change.

Up to now, Sonia has failed to appear on Bragi’s acute radar as a smuggler. She dresses wearing the latest fashion and carries herself as a confident business woman not to be hassled with. Hardly the image of a low-life cocaine-dealing smuggler.

Yet something nags in the back of Bragi’s head; each time he sees Sonia walk out of the airport as if she is walking on air. Something, but what? He will find the answer accidently a few days later, when he picks up a fashion magazine, browsing through its pages, while waiting in line at the local supermarket.

It is these pages that will change everything. Forever. For Bragi. For Sonia. For Adam and the dark secret he is hiding.

Soon to be a major film from Hollywood, Snare is told in fast-paced chapters, in a one-sitting reading, making it perfect for plane, train, or automobile journeys. Sigurdardottir has created memorable characters—and what characters they turn out to be. The intricate plot is breathtakingly original, with many twists and turns you never see coming. Thriller of the year.