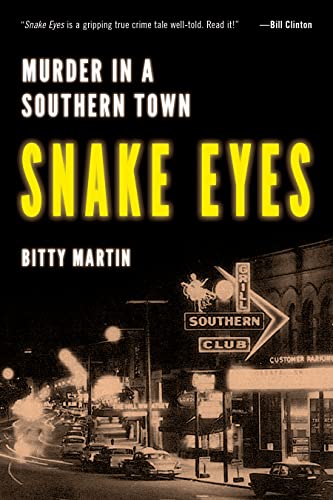 “It seemed as if Frank Davis’s violent and erratic tendencies were about to finally catch up to him. But since true crime involves real life, sometimes there is no Hollywood ending. Such was the case here.”

Take an accidental death (or was it an unsolved murder?), mix it with a second death (a for-sure murder), a subsequent conviction and death sentence, then sprinkle in a commutation of the sentence, an escape from prison, and an early parole, and you have the recipe for a miscarriage of justice. So says author Bitty Martin in her true crime Snake Eyes: Murder in a Southern Town.

Hot Springs, Arkansas, is known for its mineral baths and, in its heyday, as the spring training site for major league baseball teams as well as a haven for gambling and gangsters, such as Al Capone. It is also where Cathie Ward, a 13 year old, suffered an untimely death in what appeared to be a tragic horse-riding accident on June 24, 1966.

But the official conclusion that Cathie’s death was accidental didn’t sit well with many Hot Springs residents, particularly because of the involvement of Frank Davis, who was owner of Blacksnake Ranch where the death occurred. A man of “shady reputation,” sometimes involving young girls, and given to violent, irrational outbursts, Davis was a villain straight out of central casting.

According to Davis, Cathie had been “dragged to death by the horse when her foot caught in the stirrup.” His account lacked credibility, as much for the source as the substance, but following an astonishingly quick funeral, officials dubbed the death an accident. A subsequent investigation failed to produce any evidence to contradict Davis’s account, to no one’s satisfaction, and suspicions lingered in Hot Springs.

Less than a year later, Davis blatantly gunned down his fourth wife—he would later wed a fifth while in prison; seems he was a serial husband—and mother-in-law on the streets of Hot Springs, killing the former and wounding the latter. With witnesses galore to testify, a jury ultimately convicted Davis, consigning him to death in the electric chair.

That killing reopened questions about the death of Cathie Ward, given the proclivities of Davis and his latest act of violence. One of his prior wives even claimed that Davis “put a gun to my head and threatened to shoot me!” As the author writes, “[M]ost everyone in Hot Springs was certain we had a multi-murderer in our midst.”

Prior to his conviction for killing his wife, but while the case was still pending, another court issued an arrest warrant for Davis, for the first-degree murder of Cathie Ward. That was the one everyone had been waiting for. It seemed as if Frank Davis’s violent and erratic tendencies were about to finally catch up to him. But since true crime involves real life, sometimes there is no Hollywood ending. Such was the case here.

After the Arkansas Supreme Court upheld Davis’s conviction and sentence, prosecutors dismissed the charge for killing Ward, with the explanation that there wasn’t sufficient evidence to obtain a conviction. Still, those who believed Davis was responsible for killing Cathie at least had the satisfaction of knowing that the electric chair loomed in his future, albeit for a different killing.

That is, until politics reared its head. Arkansas governor Winthrop Rockefeller, an avowed opponent of the death penalty, had once stayed all executions in Arkansas until the United States Supreme Court ruled on the constitutionality of the death penalty. Then, upon his defeat for re-election in 1970, he commuted all death sentences to life imprisonment for those then on death row in Arkansas. That included Frank Davis.

Remarkably, that was but the first in a series of steps that led to the aforementioned miscarriage of justice. As the author writes: “But who in their right mind . . . when Cathie’s murder charge was dropped, would have imagined in only twelve months Frank would be plucked from death row and then undergo a bizarre chain of events that would allow him the possibility of parole in 1979?”

That bizarre chain of events included a transfer of Davis to a minimum-security facility in 1976, from which he escaped a mere nine months later, although his freedom lasted only a few days until his recapture. Then, without a second murder charge or conviction hanging over his head, he was, improbably, paroled in 1980. Mind-boggling, at best. Davis died a little more than three years later, living out his final days in freedom, although it was in Oregon, a condition of his parole.

But he was never able to shake the questions that lingered about his role in the death of Cathie Ward. Among those who questioned the finding of death by accident was the author, who not only was a resident of Hot Springs at the time, but also actually saw Cathie walking near her house on the day of her death. On the 48th anniversary of Cathie’s death, a call from an old friend triggered the author to revisit the event in an effort to find some answers.

“I took that as my sign to start digging up the true accounts of her tragedy and its connection to the other murder in town by a man so vile that he kept us in an anxious sweat for almost two decades. . . . I wish I could go back and change the past. What I can do now is share this story so that all these years later, Frank Davis will not get away with murder.”

But life is not always tidy and sometimes its mysteries don’t get wrapped up with a nice bow. Such is the case here. Although Snake Eyes offers an interesting look at the tragic events in Hot Springs from more than five decades ago, the ending is unsatisfying: the mystery is never definitively solved and the suspected villain escapes justice. That’s not the author’s fault; it’s simply life . . . and death.