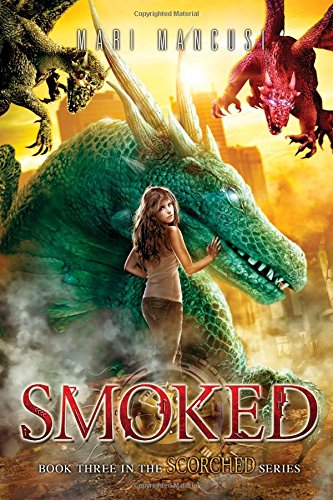 “You have to know what happens!”

Mari Mancusi takes on one of the less common creatures in young adult sagas: the dragon and goes on a rip-roaring tear with it.

After a family tragedy, it’s just 16-year-old Trinity and her grandfather trying to hold it together and they’re hanging on by a thread. Grandpa is sure life is about to change when he finds what he believes to be a rare dinosaur egg, but it just leaves Trinity rolling her eyes.

She’s accustomed to her grandfather’s eccentric ways. He’s right about one thing, though. Life is about to change, but in ways neither he nor Trinity could ever imagine. It all starts when Trinity hears voices in her head. Is she turning into her mother or is it coming from that egg?

Two brothers from the future have their opinions about the matter and they’re diametrically opposed. Trinity finds herself right in the middle—with a dragon by her side. The only thing any of them is sure of is destruction, of man or dragon, unless someone figures out what to do. And time is running out.

Scorched has clearly infused some of the elements from The Terminator movie and made it it’s own. In case you think you’re imagining it, one of the brothers is named Conner and our protagonist, Trinity, makes reference to the movie several chapters in. Instead of this coming off as a warmed-over rehash, it feels like a cool insider joke.

The author has carried you along to that point, eliciting flash points of familiarity. When Trinity casts that thought—something those familiar with the film may be thinking—it makes for a hearty and well-earned confirmation.

Scorched is an excellent example of how one can take a known pop cultural moment, gain inspiration from it and use it to weave a new work into something fresh and different. This novel doesn’t let you put it down for long.

The crescendo builds as a consistent thread, pulling the reader along. You have to know what happens! Are one of the brothers lying? If so, which one? Why? Will Trinity regret trusting either of them and will it cost her the ultimate: her life and that of those she loves? You have to keep reading to find out.

This tale ends with a solid conclusion, but it’s clear the story is not over. Wherever it goes, if Scorched is any indication, Ms. Mancusi is sure to keep the excitement and the questions coming.