The Smartest Book in the World: A Lexicon of Literacy, A Rancorous Reportage, A Concise Curriculum of Cool 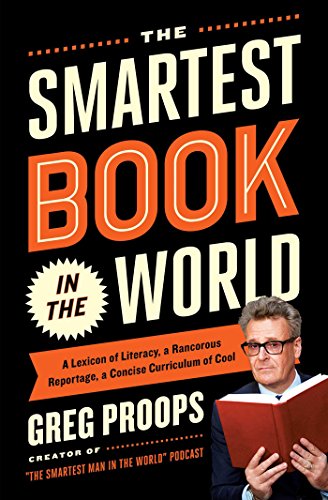 “funny, political, literate, and bold—all at once.”

While most people are familiar with Greg Proops from his work on the television improv show Whose Line Is It Anyway? he has, over the last few years become a master of a new form of mass media, the podcast, which is itself sort of a reinvention of that most analog of mediums, radio.

On his weekly podcast, The Smartest Man in the World, Proops presents a one-man show before a live audience, a monologue spun off the top of his head comprised of personal memories of a childhood spent in ’70s California, news events, poetry, baseball, rock music—anything from Steely Dan to Bad Company to Sly and the Family Stone might be played in the background—drugs and alcohol and feminist rhetoric. All as Proops sips his “vodka flavored vodka” drink.

Hillary Clinton looms large these days (in a positive light) as do recent events involving police overreach and the Christian Conservative obsession with gay rights and women’s rights to determine their own health care needs.

In short, those listening to Smartest Man for the first time will likely be surprised at the pointedly political content and at how heartfelt the comic is in making his opinions heard. And, show title aside, first-time listeners may also be surprised by the comic’s eloquence and by the passion with which he discusses not only the causes of the moment (Baltimore riots, Republican candidates for president), but also the inequalities of specific classes and groups (the poor, women, the LGBT community, persons of color) from the dawn of history forward.

Given that he is unabashedly liberal, pro-legalized drugs, pro-abortion and equal pay and marriage equality, Proops may likely be on his way to becoming the anti-Limbaugh, but he has something working for him that no conservative pundit seems to possess: a wicked sense of humor. And while his ongoing political diatribe may make him something of an anchovy, his biting humor acts as a neutralizer, making his one of the most successful podcasts available today.

In doing so, it has, safe to say, also reinvented Greg Proops as a performer, just as the art of the podcast has redefined the careers of Marc Maron, John Hodgman, Pete Holmes, Aisha Tyler, and Chris Hardwick, among others.

And the book, happily, while nearly a transcript for the podcast, is a joyful thing, working in a nearly identical mix of ingredients that Smartest Man uses weekly.

It is, therefore, a book that makes the reader laugh out loud while challenging, even seemingly bating him. It also allows the reader to read a few well-selected poems by Francois Villon, Matsuo Basho, and Ovid, among others, then forces the reader to consider why Nero should play right field in a baseball team comprised of Roman Emperors. Finally, it allows the reader to compare and contrast the Sidney Lumet films Dog Day Afternoon and Network before coming to the conclusion that “Martin Scorsese and Francis Ford Coppola are revered for their early work and quite rightly so, but Sidney Lumet stands with them in every way.”

There are several specialized baseball teams along the way (British Monarchy, U.S. presidents, with Jimmy Carter as umpire, and “The Women in History Baseball Team,” for which Harriet Tubman is manager and Hillary Clinton pitches) and all too much written about baseball itself. Just as Proops can churn himself up to ranting about baseball for hours at a time on his podcast, he dedicates too many pages here to the same deeply detailed consideration of the game, its players, and its corporate overlords.

But that proves rather a small matter (and one dealt with more easily—by turning the pages—in print then by having to wait through the diatribes on the podcasts), since the rest of the book careens along with topics like “Art I Wish I had the Balls to Steal,” in which the author considers just how to steal Georges Seurat’s “A Sunday Afternoon on the Island of La Grande Jatte:

“Georges Seurat painted A Sunday Afternoon for two years, and then went back and added a border to work with his white frame. There is a monkey on a leash and a woman fishing, which may be an allusion to the fact people picked up prostitutes on the island. It is an absorbing and active painting, changing texture and color depending on where one stands. It is of course made up of thousands of dots of paint, the technique that would be called pointillism. Seurat died quite young at thirty-one. This burglary would be most tricky, as the piece is almost seven feet tall and ten feet wide. It is as big as a movie screen smack dab in the Art Institute of Chicago. It is also upstairs. We’d have to move at night by tempting the guards with drugged brownies. Then we’d lift the painting frame and all (Seurat designed the frame as well, need that), and march our asses down Michigan Avenue pretending we are a performance art project. Then we jump in the van we have signaled by flashlight. Chance of success: less than five percent.”

Perhaps Greg Proops’s book does itself a disservice by being too literate, by believing that the reader knows A Sunday Afternoon or Jay Defeo’s The Rose and perhaps has even visited the Whitney Museum in order to see it in person. He also believes that movies are an art form worthy of our time and discussion (although he concludes that “movies are quite personal. One individual’s Godfather is another person’s Coyote Ugly.”) and that poetry is worthy of discovery and rediscovery (In his argument for this, he recalls JFK’s potent defense: “When power corrupts, poetry cleanses.”).

In the pages of The Smartest Book in the World, he gifts us with a bouquet of quotes by notables, like this one, from Kurt Vonnegut: “If you want to really hurt your parents, and you don’t have the nerve to be gay, the least you can do is go into the arts.”

Which allows Proops to add: “Art is as essential as air to the mammal, as sun to the reptile, as suppression to a bureaucrat, as metaphor to the writer grappling for examples.”

While maybe not the smartest book on the planet, this book is plenty glib, plenty sly, and pretty damn wise. It is also quick, funny, and, often, pointedly true.

Which makes The Smartest Book in the World something of a throwback to a time in which comedy could be funny, political, literate, and bold—all at once.

It belongs on the shelf with Woody Allen’s Without Feathers and Side Effects, and the Benchley Roundup, and the stuff that Ian Frazier and Jean Shepard and David Sedaris wrote when they were hitting their personal bests, as well as those two slim volumes that Fran Lebowitz tossed off before her tuxedo collar got too tight and cut off her voice.

Because Smartest Book marks the same sort of transformation in Greg Proops’s career that his podcast did. The podcast allowed the team player, the improv group member to step to into the spotlight and, in doing so, reveal his talent as a monologist more fully (Will Rogers meets Spalding Grey meets Lenny Bruce?).

The book allows another kind of metamorphosis. One in which the author transforms from comic to humorist. And shows that his verbal skills extend onto the printed page.

Here’s hoping for other books in the years ahead in which the author, having secured his Smartest franchise with the first book, will free himself from his present formula to explore his topics more deeply, to risk not always going for the laugh when writing about the arts, politics, religion—anything but baseball.