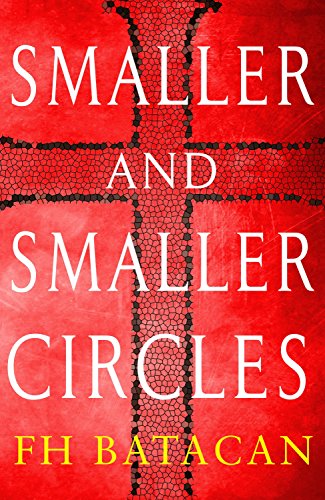 At the start of a crime novel, the reader sometimes experiences an unsettling feeling as the gory details of fictitious assaults and slaughter are rolled out. This voyeuristic peek at society’s underbelly, this craving for yet more detail—every milliliter of blood, every eviscerated organ—has fostered a strong commercial marketplace for authors to present these gory conundrums. But Batacan’s book, Smaller and Smaller Circles, has a mission to do more than satisfy this market. Cited as the first Philippine serial killer crime story, the book sets out not just to entertain but also to blow away the state’s myth that there are no serial killers in the Philippines.

The protagonist of the story is a Catholic priest, Father Gus Saenz, who combines his ministering role with university teaching and whose expertise in “forensic anthropology” proves to be a useful resource for a hard-pressed police force.

Nevertheless, the priest is patronisingly told he has “been watching too many foreign movies” when he suggests to detectives that a serial killer is on the loose in the “notorious Pattayas dumpsite slum” near Manila. Serial killings, they assure him, do not happen in the Philippines.

Fortunately the astute Director Lastimosa of the National Bureau of Investigations agrees that a serial killer is indeed preying upon young boys and, like Father Gus and his sidekick Father Jerome, he cares enough about these victims and their disenfranchised families, to do something about it.

The priests become integral to Lastimosa’s investigation, and as the details of the murders unfold in all their maggoty detail, we learn that each small child is murdered in the same, horrific way on the first Saturday of the month. The lack of blood at the dumpsite indicates the murders took place elsewhere, with an apparent medical precision. It takes only a couple of red herrings before the super sleuth priest homes in on the killer and his crime scene.

It is perhaps not too much of a leap of faith to believe that Father Gus could combine sleuthing with communions and campus. After all, he is following in the well-trodden footsteps of G. K. Chesterton’s fictitious investigator, Father Brown; however, his single-handed apprehension of the killer does stretch credibility (although it fits the plot nicely).

The subplot involving the sexual abuse of young boys by an older priest is a bold one and comes at a time when trust in the Catholic clergy, when the welfare of young boys is involved, is arguably at an all time low. This brave choice by Batacann addresses these important issues of trust and responsibility.

This is a tidily constructed and written book that was originally a far shorter story. It is a weighty tale and undoubtedly merits its new life as a full-length novel. The reader is gripped throughout, albeit alternately with fascination and revulsion. The full horror is gut wrenchingly real when the young victims themselves reveal their final moments. One of the most moving passages comes when a victim’s mother arrives at Father Gus’s office and presents him with  warm, freshly baked confection saying simply “I know what you did for my boy” before extolling the virtues of her baking, always “sold out by five o’clock.”

Crime, thriller, and mystery genres are hugely popular and widely read. How very appropriate, then, that Batacan has used her powerful first novel as a vehicle not just to entertain, but also to enlighten a wider audience to the poverty and injustice the people from the notorious Pattayas district outside Manila suffer: People who don’t just inhabit these slums but also scavenge for their very existence on the fifty-acre landfill site and its festering waste. Families with little hope of protection from the justice system.