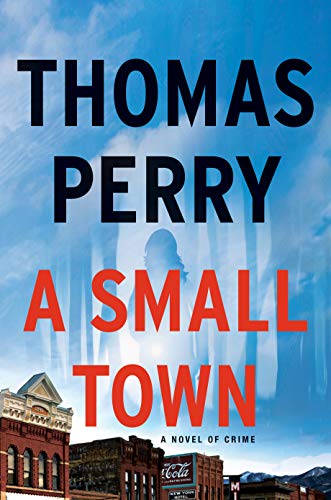 “A Small Town is another example of Thomas Perry’s ability to tell a fast-paced, absorbing story with a strong central character.”

When 12 prisoners in a maximum-security federal prison engineer a well-planned jailbreak, the nearby town of Weldonville, Colorado, has no idea what’s in store for them. Without warning, 1,200 inmates descend on the town in waves, breaking into 376 houses and murdering 97 residents while raping most of the women beforehand. Countless homes are burned to the ground. More than a dozen prison guards lose their lives, along with eight Weldonville police officers, responding firefighters, and the city manager.

Most of the escapees are either killed or rounded up and returned to the prison, but the original 12 fugitives remain at large. Although the mayor and city council wait for two years, it’s eventually clear the FBI has made no progress toward finding them. It’s time to take matters into their own hands.

Detective Lieutenant Leah Hawkins of the Weldonville Police Department is placed on sabbatical, given a million-dollar budget drawn from federal funds allocated to rebuilding the town, and sent on a mission. She’s mandated to find each of the 12 original escapees, the ones responsible for destroying their town. When she finds them, she will kill them.

Thomas Perry is the author of more than 20 bestselling thrillers, most notably The Butcher’s Boy, which received an Edgar Award for Best First Novel, and the very entertaining Jane Whitfield series.

A Small Town is another example of Thomas Perry’s ability to tell a fast-paced, absorbing story with a strong central character. Leah Hawkins, although perhaps not quite up to the extremely high standard set by Jane Whitfield, is a solid protagonist who could very well offer readers much more in future novels. Standing 6’-2”, she’s a former high school and college basketball star who possesses the investigative skills and relentlessness we’ve come to expect in our modern thriller heroes.

As the narrator explains, “Leah Hawkins was a woman who met freezing weather with warm clothes instead of complaints.” She’s pragmatic, indifferent to distractions such as money or influence, and very, very good at what she does.

A key difference between Leah and Jane Whitfield, however, lies in where Perry chooses to situate his moral compass within the story. While Whitfield’s mission is to help essentially good people disappear and start a new life, Leah Hawkins takes on the opposite task: to find fundamentally bad people who have disappeared and end their lives. Readers must be comfortable with the Reacher-style vigilantism at the core of this story or the novel will not work for them.

In addition to developing a strong central character with a well-defined mission, Perry also succeeds in creating an effective portrait of a town struggling to recover from a horrific attack on their very existence. He describes how Weldonville thought they were getting a facility that would house white-collar, low-risk inmates instead of the worst of the worst, how they innocently accepted the prison as a source of jobs and financial continuity, and how they were betrayed by the system at an impossibly high cost in terms of lives, morale, and hope for the future.

As Leah’s pursuit of vengeance takes her from Colorado to Florida, upstate New York, California, and Arkansas, Perry pulls back the tarps on the unseen criminal world of high-level document forgery, rural anti-government communities, and electronic surveillance.

A Small Town is a thriller with a dark edge and relentless forward momentum. Thomas Perry continues to produce the kind of novel readers want: exciting, engaging, and thoughtful.