A Small Hotel: A Novel 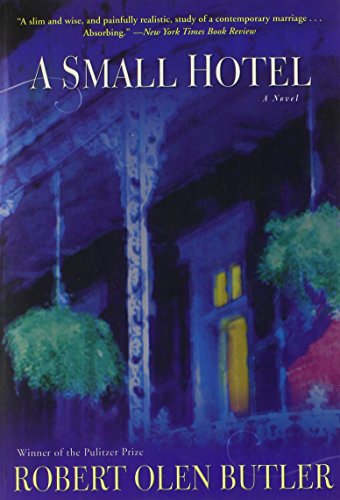 Robert Olen Butler, best known for A Good Scent From a Strange Mountain, his 1993 Pulitzer-Prize winning collection of short stories, has been turning out first-rate fiction for three decades.

Butler served in Army intelligence in Vietnam, and used the war as the centerpiece of much of his early fiction. That includes the beautifully executed Good Scent—which tells the first-person stories of 15 Vietnamese emigrants to southern Louisiana, as well as his first published novel, The Alleys of Eden (1981).

In that well-crafted novel spins out the tale of an American Army deserter who falls in love with a young Vietnamese woman and lives with her for four years in the back alleys of Saigon. They are then forced to flee to the United States during the 1975 communist takeover. Butler’s haunting story can be seen as a metaphor for the pain and suffering caused by this country’s participation in the Vietnam War.

The Vietnam War and its legacy also were themes in Butler’s novel, On Distant Ground (1985), a tautly written tale studded with illuminating flashbacks and realistic dialogue. The book begins in Vietnam where a U.S. Army intelligence officer goes out of his way to free a Viet Cong prisoner. He is court-martialed in the States then takes off for Vietnam in the war’s waning days in search of a child he believes to be his.

The Vietnam War and its legacy also are themes in three other Butlers: The Deuce (1989), They Whisper (1994), and The Deep Green Sea (1998). In those novels and his other short stories and short fiction, Butler, who teaches creative writing at Florida State University, shows off a sterling ability to bore deeply inside his characters’ heads and illuminate their deepest emotions.

That certainly was the case (literally and figuratively) in his 2007 book Severance, which is made up of dozens of richly imagined exceedingly short stories, each one a 240-word glimpse into the mind of a person who has been decapitated. Those stories are unpunctuated, stream-of-consciousness prose poems that look into the (severed) heads of many real people, including John the Baptist, Walter Raleigh, Marie Antoinette, Jayne Mansfield, and Nicole Brown Simpson.

In Intercourse (2008) Butler offers 40 or so short, short stories, each one told by someone famous in the throws of sexual congress. Starting with Adam and Eve, Butler imagines each partner’s musings while copulating. Perhaps not surprisingly, most of those thoughts deal with decidedly non-sexual issues

In his previous novel, Hell (2010), Butler puts the reader into an unrelentingly hellish narrative that centers on the frustrations of the main character, a former TV anchorman trying to escape from the netherworld—kind of. Butler hits home in this satirical farce, in which Henry Kissinger and Richard Nixon (among many others) have hellish speaking roles.

A Small Hotel has nothing whatsoever to do with the Vietnam War, Vietnamese expatriates, American veterans, or the war’s legacy. Butler’s subject here is the unraveling marriage of a 40-something couple. Michael Hays is an emotionally constricted lawyer with intimacy issues; his wife Kelly is emotionally needy. Not a promising combination for a happy marriage. In fact, they are going through a not-smooth divorce.

Butler offers a short but intense and illuminating look at Michael and Kelly’s innermost thoughts as the divorce is about to become final. Kelly is considering suicide in the hotel room in New Orleans’s French Quarter where the couple first coupled and where they often returned to rekindle the marital flame. Michael is contemplating the consequences of beginning of a serious relationship with a much-younger woman.

Butler tells the story flashing back and forth to Michael and Kelly’s childhoods and their early married years. In fact, there are flashbacks within flashbacks as the narrative caroms from Michael’s mind to Kelly’s, as well as (to a much lesser extent) to the thoughts and deeds of Michael’s hot girlfriend Laurie and the Hays’s 19-year-old daughter.

It’s often an unhappy, unpleasant tale. But in Robert Olen Butler’s capable hands it is an intriguing and often beautifully told one.