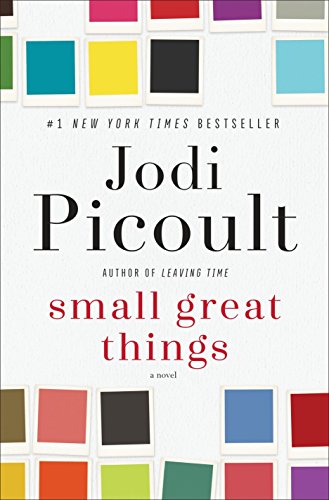 As the American nation watches the often ugly coverage of the elections of 2016 on their television screens, as we hear of #BlackLivesMatter on a daily basis, a book about race relations seems to be the need of the hour. A fictionalized account of what it means to be black, accused of a crime without any proof. Readers will judge whether Jodi Picoult’s Small Great Things is such a novel.

Picoult is a beloved author figure, with 23 books under her belt, many of which are NYT bestsellers. She weaves a good tale, but in Small Great Things she may have missed her mark. In the acknowledgements, she accepts that she and many of her readers are “well-intentioned white ladies who never consider themselves to be racists.” So she has set herself to write a book that will bring the pain of racism to readers like her. To explain the other side. To help make the world a little less prejudiced.

The story itself is exciting and fast paced. Ruth, an African American nurse of 20 years is stopped from treating the baby of a white supremacist couple who come to her hospital to give birth. She agrees, but then the baby dies under her care, and she is blamed for his death. Kennedy, her public defender is a white woman with ideas like Picoult herself: insisting she doesn’t see color. Together they face a trial and some of their own prejudices. We see a lot of courtroom drama, which Picoult is a master at describing.

We hear a lot about various viewpoints, from African American to white supremacy. The theme of injustice toward blacks in the legal system is front and center, and zingers like these by Ruth when she is arrested make us feel so much:

“They put me in chains.

“Just like that, they shackle my hands in front of me, as if that doesn’t send two hundred years of history running through my veins like an electric current. As if I can’t feel my great-great-grandmother and her mother standing on an auction block.”

But underlying the story is a problem: Picoult is trying to tell us a story that isn’t hers to tell. In publishing and writing there is currently a discussion about #ownvoices, which means it is important for authors to write stories they are familiar with, otherwise the lack of information and awareness shows no matter how much research goes into it.

A white woman who professes to be “colorblind” may not be able to really know what it feels like to be black or how racism actually works in the real world. Picoult’s gamble has not truly paid off, despite the extensive research she has put into understanding the issue from an African American perspective.

Ruth, her sister Adisa, even Kennedy the white lawyer all seem stiff and stereotypical. They are characters rather than people, and there is much sermonizing that an author of Picoult’s caliber should not have been guilty of. Perhaps the best, most fleshed out character is Turk, the white supremacist father who is torn with grief at the death of his son.

As the villain of the story, Turk could have easily have been a one-dimensional, cardboard character. When he insists he doesn’t want a “nigger” touching his baby, readers want to hate him. But Picoult takes us inside the heart and mind, the past and the present, of Turk and his wife. She shows us the ugly underbelly of white supremacy in a way that is eye-opening.

Today, thanks to the 2016 election campaign, discussions of white versus color are at the forefront of our national consciousness. Americans are witnessing a horrific rise of what is called the alt-right movement and a denigration of people of color. Picoult’s descriptions of the activities of white supremacists—from shooting ranges with targets of MLK to online forums spewing hate through anonymity—are enlightening for probably most of her readers and really help paint a picture of that segment of American society. It is terrible but much needed.

At the end of the day, Small Great Things is a valiant effort to do something positive. Picoult must be applauded for that. The story itself is excellent, fast-paced, and even at times nail biting. But there are bound to be #ownvoices criticisms that are equally valid.