Slow Getting Up: A Story of NFL Survival from the Bottom of the Pile 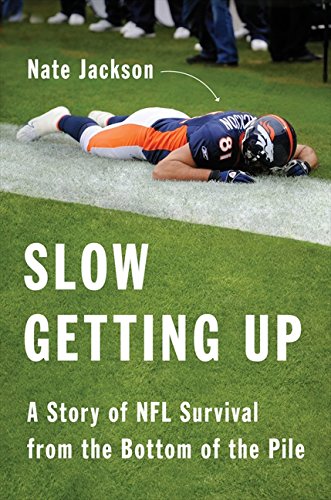 “The book may be called Slow Getting Up, but if you take the time to read it, you’ll find yourself incredibly slow to put it down. Jackson may have only scored two touchdowns in his NFL career, but he can certainly count this book as a 99-yard game-winning TD.”

The sleeper sports book of this year, or perhaps any year, is Nate Jackson’s Slow Getting Up, a Ball Four-level honest look at the lives of NFL players by one who was there.

The term sleeper is not all that inappropriate, given the cover photo with Nate Jackson stretched out on the turf in his Denver Bronco uniform, presumably injured yet again. In his six-year NFL career, Jackson seems to have spent at least as much time at doctors’ offices as he did on the field. But that doesn’t change the fact that he has written a hilarious insider’s view of realities of playing in the NFL.

Most sports books are about stars. These were incredibly gifted athletes whom everyone, from parents to coaches to best friends, knew they were ticketed for greatness practically from first grade. In today’s hypercompetitive sports marketing world, most kids great at sports are identified extremely early in life, and greatness—followed by acclaim, fame, money, and the inevitable tell-nothing book—arrive in short order.

Jackson is different on many levels. First, he’s not the prototypical athlete who can write a little bit. (It appears that he wrote his entire book all by himself, without the help of a ghost.) He’s something much rarer: a writer who actually had the athletic talent to play in the NFL.

Talent, but not that much talent. Nate Jackson is well aware of the gulf between himself and the Jerry Rices and Joe Montanas of the world, the individuals who made the game look easy and who had careers that spanned 15 years or more. Instead, Jackson was a great athlete with marginal football talents who hung in there long enough to make it to the highest levels of the game.

He even scored a couple of touchdowns, which are described in gratifyingly detailed terms. You really feel as though it’s you and not him—which is the ultimate achievement of art in a sports book.

Jackson has the ability to turn a felicitous phrase, and he combines that with wonderfully self-deprecating humor and a Proustian eye for detail to turn the story of a guy who seemingly never knew from week to week whether he would be in uniform into a compelling story.

For example, he describes the experience of coming out of the inflatable Denver Broncos helmet and lurching onto the field. It’s a moment with which every player, and every fan, is familiar. But only Nate Jackson has the ability to notice—and then write about—the mingling of the scent of the perfumes of the cheerleaders with the smell of the fireworks. There’s not an English professor in the country who wouldn’t take his hat off to admire a moment as well noticed as that.

Jackson is extremely candid about his medical history, which does indeed outstrip his football one. He may never have been the most valuable player, but he was certainly up there with the most injured. We traipse from training table to hospital to rehab, hoping against hope, along with Jackson, that he’ll find a way back on the field. Usually he does, until the bitter end when the Broncos cut him and he can’t quite catch on with the Browns or the Eagles.

Jackson also gives us an insider’s look at the social life of the NFL player, which is pretty downright enjoyable from his perspective. Except for the moment, of course, when he meets a girl in Vegas, has a fling with her, texts with her, and then discovers that he’s actually texting her husband, who politely asks him to cease doing so.

The odd thing about reading Jackson’s book is that he is not nearly as good a football player as he is a writer. He’s darned good—good enough to hang in there all those years with the Broncos, which puts him in the elite of the sport. But he’s not in the elite of the elite, the household names, the people who usually have their names on books (not that they actually have read those books half the time). So you keep waiting for the breakout season that never comes, the MVP year, the long-overdue recognition that he is one of the greatest in the game.

In other words, this ain’t Rudy.

But no matter. The fact that the reader wishes so much more for Jackson indicates the level of the empathetic bond he is able to create by virtue of the strength of his writing. In a sports world where everyone is encouraging everyone else to keep it real, and no one does, Nate Jackson does. Even the title is tremendous—Slow Getting Up, the broadcaster’s euphemism for a player who has suffered yet another concussion or insult to his body.

The book may be called Slow Getting Up, but if you take the time to read it, you’ll find yourself incredibly slow to put it down. Jackson may have only scored two touchdowns in his NFL career, but he can certainly count this book as a 99-yard game-winning TD.