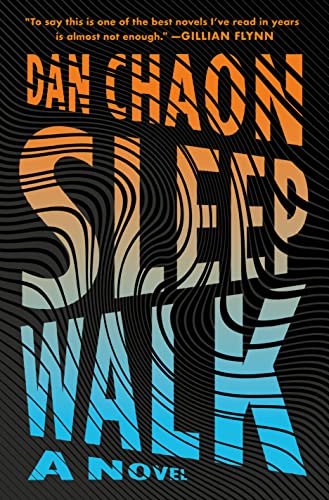 “The book could be read as a warning about where we are headed as a society.”

In some dystopian novels, it’s clear from the outset that the world has gone to hell. There’s been a nuclear war that has destroyed most of civilization, or the national power grid has collapsed, or a virus has killed all but a handful of people who are now left to repopulate the planet. The apocalypse has come and gone, and now the human race is struggling to rebuild. The reader knows what she’s dealing with in a book like that and calibrates her expectations accordingly.

Dan Chaon’s new novel, Sleepwalk, is not that kind of book. Instead, it’s a bit like the proverbial frog in a pot of hot water. The situation doesn’t seem too bad at first, a little more uncomfortable than usual, but by the time the frog realizes he’s in big trouble, it’s too late to jump out. In other words, this is a story in which the temperature starts hot and keeps ratcheting up until it’s boiling. One misstep leads to another and another, and the outcome for the protagonist is always in doubt. For the reader, it’s an exciting ride, a roller coaster that never stops surprising.

The narrator of the novel is Will Bear—he’s also known as Billy and by countless other aliases—who lives entirely off the grid. He doesn’t pay taxes. He doesn’t have a regular job. Whatever identification and credit cards he has are forged or stolen. He communicates via untraceable burner phones. He lives in a camper, a custom-built motor home he’s named “Guiding Star,” and is always on the move.

When we first see Billy, he appears to be on an assignment as some kind of bounty hunter or debt collector, but the full extent of his employment by a sketchy corporation called Value Standard Enterprises is revealed in time.

Billy’s world is upended when one of his burner phones—he has several—begins to ring. The caller asks for him by name, something that isn’t supposed to happen with these unregistered phones. He tosses the phone out the window of the moving camper, but another of his phones rings. The same caller asks for him again, using one of his other aliases, and he tosses that phone as well. It happens over and over, different phones, calls asking for his various aliases. Finally, when the caller uses his oldest alias, he realizes she can no longer be ignored.

The caller, who says her name is Cammie, tells Billy that she is the product—one of many such offspring—of a sperm donation he made many years earlier. At the time, selling sperm was a source of quick cash, but now he realizes it’s the one mistake he’s made in all these years of flying under the radar: leaving a trace of himself in the form of his DNA. Cammie offers just enough detail that Billy thinks her claim might be credible. The problem is, Cammie says, and the reason she’s calling him, is that she’s in danger and so is Billy.

Between periodic conversations with Cammie, Billy has time to recall how he came to be the nearly invisible man he is, and in the course of these recollections the reader learns how off-the-rails the world has gone: collapsing infrastructure; failed government agencies; climate change and rising sea levels; omnipresent surveillance in the form of robots, drones, and cameras; among other things. What seemed almost normal at first has taken a much darker turn. The water is now boiling.

One sign that we’re in trouble occurs as Billy is driving away from a completed assignment: “I’m adrift in these reminiscences when some crap begins to fall out of the sky. It’s not sleet or snow this time, but something I’ve never seen—dark flakes of some kind of substance come down like leaves from a tree and they make a muddy smear when my windshield wiper pulls them across the glass.”

The novel, then, will be about whether Cammie can gain Billy’s trust or whether his obligations to the Value Standard Enterprises will win out. Along the way, Billy continues to learn more about his past and encounters some of the people who have been instrumental in guiding—or misguiding—him.

The plot of the novel is thoroughly engaging, a rollicking trip from one misadventure to another, populated by an eccentric cast. Billy himself is quite a character: a rescue-dog loving, pot-smoking, vodka-laced-with-LSD-drinking, long-haired mercenary who has a fondness for the great outdoors (Cammie will occasionally call him “Nature Boy”) but isn’t shy about killing another human if the job calls for it. Then there’s Experanza, Billy’s trusted childhood friend and another employee for Value Standard Enterprises. She’s the only one Billy can turn to for advice.

Possibly the oddest character in the book is Patches, another old friend. Billy recalls arriving in the Chicago area as a young man and crashing a fraternity party at Northwestern University, and meets Porter St. Germaine, or “Patches,” a rich boy who will eventually become a doctor and steer Billy toward the sperm donation gig that has apparently resulted in Cammie. When they meet again in the present as Billy is learning more about Cammie, he finds that Patches may have more to do with his dilemma and Cammie’s warning than he realized. Furthermore, Patches now lives with a companion, a sophisticated chimpanzee who might be part human.

While never heavy handed, the book could be read as a warning about where we are headed as a society. Have we frittered away our privacy with our addiction to social media and our use of technology? Is the damage we’ve done to the environment already irremediable? Have we allowed the oligarchs and corporate behemoths to operate beyond the scope of government regulation?

Early on in the book, Billy reflects on these troubles. “No doubt, a day of reckoning for mankind is coming, yet even for those of us who accept the inevitability of mass human death, there’s still a cautious hope; we’re waiting to see how Armageddon plays out, keeping an eye open for ways it might turn to our advantage.”

Regardless of the message, Sleepwalk, is one of the most entertaining novels this reviewer has read in a long time.