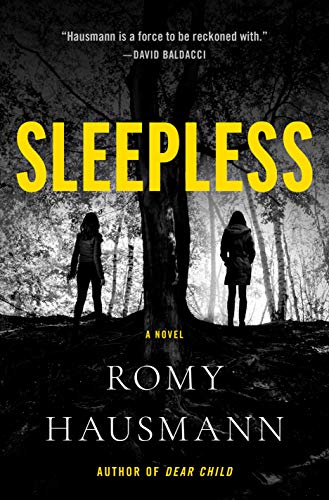 “the suspenseful action and Hausman’s engaging prose make Sleepless worth the effort.”

Sleepless, Romy Hausmann’s second thriller following her breakout debut novel Dear Child, is a sprawling suspense story that explores the blurry region between what is morally right and legally just as the tale weaves through the crimes and infidelities of its characters.

The novel follows two distinct storylines. One centered around Nadja Kulka’s desire to help her friend Laura van Hoven cover up the murder of her lover, Aaron BruckStatt, and the other detailing the murder of Nelly Schutt, a devoted fan of old movies, who was murdered, presumably by her lover.

The two storylines are linked together as both are motivated through romantic entanglements and both involve successful criminal lawyer Gero van Hoven, who was the defense litigator in the murder of Nelly Schutt and the husband of Laura van Hoven, who committed the second murder.

The main narrative, revolving around the murder committed by Laura, stays consistent to Nadja’s point of view. She works in Berlin as Gero’s legal assistant. Nadja believes Gero to be a decent man and knows she’s lucky to have such a good job particularly given her mysterious past—years ago she was herself convicted for the murder of her mother, a known prostitute. The details and circumstances of her crime are revealed slowly through the novel, as are the events of the other murders, heightening the suspense as Hausmann drops in enough hints to provoke intrigue and arouse curiosity.

The secondary narrative, focusing on the murder of Nelly Schutt, occurs five years prior to the main narrative and starts in her point of view but shifts from character to character and presents the events leading up to Nelly’s murder and the ensuing legal aftermath following it. In that case, Gero served as the defense litigator, representing Nelly’s accused murderer—her lover, Herr Heger.

In the present time of the story, Nadja becomes entangled in the murder of Aaron Bruckstatt when Gero’s wife Laura invites Nadja to her home to show her Aaron’s corpse. Laura explains she killed him during an argument. Laura describes Gero as a jealous man who would kill her if he learned of her infidelity. Laura doesn’t want to abandon her daughter Vivi without a mother by being convicted and sent to jail, which seems very likely. Laura begs Nadja to help with the cover up. Nadja idolizes Laura and is desperate for her friendship, so she agrees without hesitation, hoping this will win over Laura’s trust and friendship.

The two quickly come up with a plan to make Aaron’s body disappear. Nadja will drive the body to Spreewald, Laura and Gero’s holiday getaway, in the trunk of her car. Laura will meet Nadja there, and they will dispose of the body permanently.

Things take an unexpected turn when Gero uncovers their plan and tracks them to Spreewald where they find themselves at his mercy. His jealousy drives him to put Laura through a mock trial for her infidelity with himself as judge, jury, and executioner.

Overall, although Hausmann’s prose is descriptive and engaging, at times, the story is confusing. For example, the opening scene where Nadja has a panic attack in a market. The reader may question where the events are taking place and what is happening. And overall, the dual narratives are only loosely connected, making one question whether the narrative featuring Nelly Schutt was necessary and enhanced the other narrative in any significant way. In spite of this, the suspenseful action and Hausman’s engaging prose make Sleepless worth the effort.