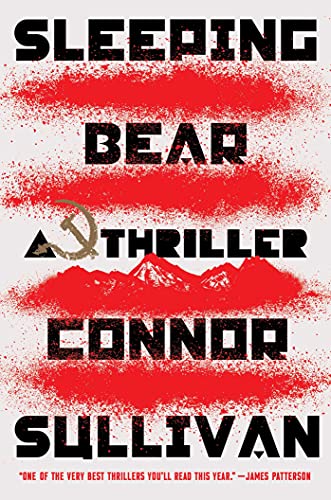 “For readers who enjoy a fast-paced international thriller, Sleeping Bear will keep you turning pages, even if it requires you to pause as you work to accept the implausible.”

Television shows about living in the Alaskan wilderness are popular because they appeal to a deep human desire to commune with nature and escape from personal demons and the trials of modern life. This desire plays out in several of the characters in Sleeping Bear, the debut thriller by Connor Sullivan.

Recently widowed Army veteran Cassie Gale decides to leave her home in Montana to work as a rafting expedition guide in far northern Alaska. Accompanied by her late husband’s military service dog, she drives from Montana, through Canada’s Yukon Territory, and on to Alaska. Another character, former Navy SEAL, Paul Brady, battered by PTSD and a painful divorce, follows a similar path. As does Billy, a rather aimless young man who becomes Cassie’s driving companion from Canada to Alaska.

All seek refuge and healing in the wild. Instead, all find themselves sucked into a twisted kidnapping and torture plot shortly after overnight stays at the deceptively welcoming Northern Breeze Lodge. Aall is not as it seems with the lodge’s proprietors and several of its regular patrons.

We meet Jim Gale, Cassie’s father, after she, Paul, and Billy are abducted from the Alaskan wilderness in separate incidents. Gale, a long-time widower who raised Cassie and her sister, Emily, in Montana, has dark secrets and demons of his own. When he learns that Cassie has gone missing, he and Emily and her husband fly to Alaska to find her. There, they encounter a variety of characters, including local and state authorities who range from incompetent to corrupt. Initially, there seems to be little hope that Cassie and the missing men will be found alive.

A quarter of the way into the story, Cassie wakes to find herself in a secret Russian facility along with several other prisoners, including Paul Brady and Billy. She soon learns they were all abducted and brought to Russia for medical experimentation and torture in the form of a real-life Hunger Games battle against better equipped Russian prisoners. The evil mastermind behind this scheme is General Viktor Sokolov, a senior Russian intelligence officer with close ties to Vladimir Putin.

As Sokolov rifles through Cassie’s belongings, he discovers a family photo that includes her father, a man he once knew as CIA operative Robert Gaines. Until now, everyone, including the CIA and Russian intelligence, believed that Gaines had been killed decades prior after murdering Sokolov’s son. Even though the American’s body was never recovered, Sokolov apparently accepted that Gaines was dead. Twenty-plus years later, Sokolov now realizes that the man who destroyed his life is within his grasp. Accordingly, he hatches a plot to kidnap Gaines/Gale and Cassie’s sister so that he can finally avenge his son’s death.

Although the premise of Russian intelligence kidnapping and torturing Americans is a bit far-fetched, it works up to a point. It breaks down when Sokolov learns that Cassie is the daughter of his arch-nemesis, Robert Gaines/Jim Gale. The odds of Sokolov’s kidnapping team randomly snatching Cassie from the wilds of Alaska push the boundaries of believability. Had Sokolov instead hunted for Gaines’ daughters all these years, the reader could easily believe that he targeted Cassie intentionally and brought her to Russia to exact generational vengeance against her “dead” father.

Instead, Cassie’s kidnapping and the discovery that Robert Gaines is still alive is all happenstance, requiring an enormous suspension of disbelief. This plot fracture also affects Sokolov as a character. A thoroughly repellent figure, it’s clear that he engages in wicked pursuits not to right a wrong, but simply because he can. Sokolov is an opportunist, capitalizing on a wild coincidence, rather than a man on a mission driven by unresolved grief. Were he the latter, readers might feel a twinge of sympathy for or understanding of the motives of this very dark protagonist.

Despite these issues, strong writing and pacing help to sustain the story. The action sequences, particularly in the latter third of the book are top notch, even if they, too, elicit a raised eyebrow or two. Sullivan’s understanding of military operations and the workings of the national security apparatus are solid, lending authenticity to these scenes. For readers who enjoy a fast-paced international thriller, Sleeping Bear will keep you turning pages, even if it requires you to pause as you work to accept the implausible.

Susan Ouellette is the author of The Wayward Spy (Camcat Books, 2021), winner of the Independent Publisher Book Award Gold Medal for Suspense/Thriller. The sequel, The Wayward Assassin, is due out March 15, 2022. Susan has worked as a CIA analyst, a Professional Staff Member for the House Permanent Select Committee on Intelligence, and as a government contractor and freelance researcher, analyzing issues such as terrorism and weapons of mass destruction.