Sleeper Agent: The Atomic Spy in America Who Got Away 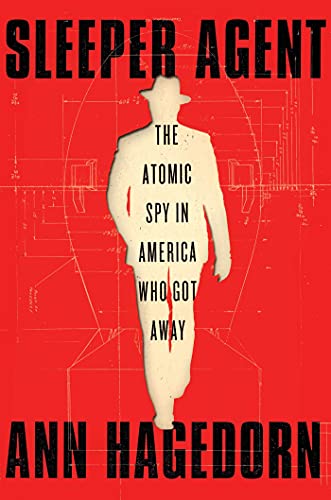 Ann Hagedorn covers a lot of complicated ground in this story of how the Soviet Union relied on patience and luck to infiltrate the Manhattan Project at a deep level. Their spy, George Koval, had the perfect cover for the job. Born in the US, he spoke fluent American English and fit in seamlessly with the culture. He didn’t even need to apply for a job at the Oak Ridge plant but was assigned there due to his high scores on military tests and his degree in chemical engineering. The posting came to him, rather than the other way around. He looked like the best candidate because he was—aside from the small fact that he was a Soviet spy.

The subtext that runs throughout Koval’s story is ugly anti-Semitism, first of all, in Russia, which his parents fled, escaping murderous pogroms. Settling in Sioux City, Iowa, they thought they’d found a quiet slice of the American dream, feeling comfortable enough to start a family. Things turned ugly a few years after Koval’s birth in 1917, when the Russian revolution set off a wave of anti-Semitic hysteria in the United States. Jews were “America’s new enemies” as Russian Jews were labeled Bolsheviks. Jewish immigration to the country was halted in reaction to this fear, and the Klu Klux Klan enjoyed a soaring rise in membership as they warned “residents of Des Moines and Sioux City to beware of the Jewish conspiracy trying to control America.” This strain of anti-Semitism returned in the 1950s when communists were hunted down by HUAC, the House Un-American Activities Committee, where the suspects were overwhelmingly Jewish.

By the 1920s, anti-Semitism was widespread and deeply ingrained. Still, Koval’s parents stayed in Iowa, where their son went to the University of Iowa’s College of Engineering. Both in high school and college, Koval joined communist organizations, drawn to a vision of social equity. His family saw the young Soviet Union as the only country in the world “dedicated to ending poverty and oppression.” So when the USSR reached out to Russian Jews in the US, urging them to return to their homeland, it wasn’t a hard decision to make. The new Russia had made anti-Semitism illegal and now welcomed Jews to the Jewish Autonomous Region. America, in contrast, had shut the doors on Jews everywhere. Job notices explicitly warned that “Only Christians Need Apply.”

So the entire family went back to the Soviet Union. There, Koval’s dedication to communism was hardened as he was recruited  to work in intelligence, his profile as the perfect spy already clear to the GRU.

All of this is vividly described with fascinating twists and turns. Hagedorn has clearly devoured a mountain of research, so it’s disappointing when, writing about the discovery of nuclear fission, the author credits “two German physicists in Berlin in late 1938.” In fact, although the experiments were run by the German scientists, the revolutionary interpretation that the atom was being split was made by an Austrian Jewish woman who had fled to Sweden. Lise Meitner should have been correctly credited, especially given that one of Hagedorn’s most important sources was a scientist colleague of Koval’s, Arnold Kramish. Kramish wrote a book about another atomic spy, this one for the Allies, who used Meitner to get information about what her colleagues were doing in Germany since they stayed in touch through letters. This lapse makes the reader question the accuracy of other assertions throughout the book. It’s a good adventure story, well told, but how reliable is the research that underpins it when such an error is included?

What is certain is that Koval successfully passed on information that shortened the time the Soviets needed to make their own atomic bomb. Equally clear is how anti-Semitism ran through both the United States and its rival, and how that hatred affected scientists on both sides. The story of how Koval’s involvement was ultimately revealed is compelling, but the even more gripping narrative is how and why he became a spy in the first place. Hagedorn navigates her way through the many layers of deceptions, telling a story worthy of John Le Carre.