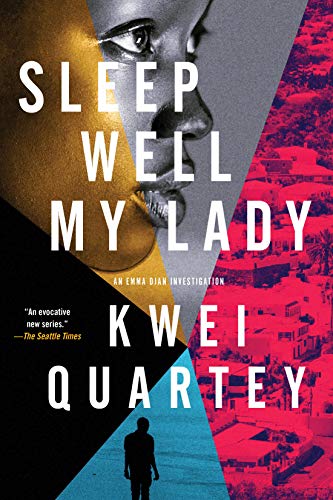 “Like his earlier books, Sleep Well, My Lady gives Quartey, a Ghana-born Californian physician as well as writer, plenty of space to lay out issues of class and wealth, as well as corruption and political maneuvering.”

This is the second of Kwei Quartey’s Ghanaian mysteries to feature private investigator (PI) Emma Djan. Quartey’s earlier series of five books established Ghana’s police force as facing multiple challenges, around Inspector Darko. The switch to young Emma Djan, who lost her coveted police job by daring to complain about it, offers a bright and very active group of investigators sharing the work at the Sowah Private Investigators Agency—which does not generally tackle murder.

But a market slump opens Mr. Sowah to accepting a case, ten long months after a killing and quick arrest. Dele Tetteyfio, aunt of the murdered fashion designer Lady Araba, isn’t satisfied with the arrest or anything else that the police have done with the case, and wants the real culprit brought to justice. She’s read about Emma, has confidence in her as an investigator, and can afford to pay for a professional investigation.

In an usual twist of crime novel construction, readers won’t find that out until Part Two of the book. Instead, early chapters alternate in time before and after the murder, and in points of view of people who have a stake in Lady Araba’s life and love—most of all, her lover, controversial talk-show host Augustus Seeza. Between Augustus’s alcohol abuse, cheating on his marriage, and his passion for Lady Araba, he’s a hot mess. Could he be the killer?

Good luck deciding—the Sowah Agency team is soon baffled by all the people who might have wanted Lady Araba out of the way. Quartey lays out scenes like jigsaw puzzle pieces, all pointing in different directions. The only person who’s pretty clearly not the murderer is Madam Dele herself, who explains:

“About two weeks after Araba’s death, I made an appointment with the head of CID, Madam Tawiah, to demand that they come out with the results of the DNA evidence, which I was informed were collected at the scene. You know what this woman told me? That she wasn’t aware of any DNA in existence. Yes, the director of CID told me this. How worthless are these people?”

Agency owner Sowah of course sympathizes, asking, “And you feel confident that if they did have such evidence, it would prove the murderer was Mr. Seeza?”

“Absolutely,” comes the client’s reply. And with a swift signature on a contract, and a quickly scheduled all-agency meeting to review evidence and divide up the tasks ahead, the new investigation is launched.

Like his earlier books, Sleep Well, My Lady gives Quartey, a Ghana-born Californian physician as well as writer, plenty of space to lay out issues of class and wealth, as well as corruption and political maneuvering. He spins a swift and well-twisted tale of evidence and motives, and of Emma’s efforts both undercover and among the other investigating agents. The bouncing timeline scatters red herrings nicely, and there’s added suspense in seeing various perspectives and wondering how Emma and the team will assemble all the pieces.

Although Emma is an intriguing character herself, newly exposed to some of the dangers of being a woman in this job, the book gives few scenes from her point of view. It’s still a nicely turned out crime novel, but calling this one an Emma Djan investigation is misleading. Instead, like Alexander McCall Smith’s Botswana series, Sleep Well, My Lady is an all-agency tour de force. But unlike Smith’s series, Quartey adds a satisfying spice of outrage and danger. Don’t shelve this with women PI’s just yet, but instead on your general Africa shelf, if you have one. It’s good reading, especially for a winter TBR stack.