Slaying Goliath: The Passionate Resistance to Privatization and the Fight to Save America's Public Schools 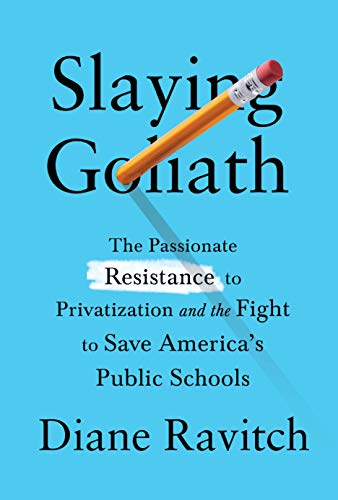 “Ravitch is an important figure in the world of education, and her voice needs to be heard. She is a writer of considerable skill, as well as an educator who knows this movement from the inside.”

In the 1990s, a movement arose to “reform” America’s public schools based on the notions that our schools were failing and that we needed new, innovative ideas for a stale and decaying public school system. The idea was to create innovative new schools called “charter schools,” unencumbered by regulations and bureaucracy, and allow for more choice among parents. Initially, there were few objections.

The movement really gained momentum in the 2000s, during the Bush administration. At this point, with “No Child Left Behind” and other legislation, it became clearer what the movement involved. Charter schools were rarely run by groups of local innovators; they were part of a national push to privatize the public schools, replacing them with schools run by corporations. A political ideology lay at the root of this endeavor: the charters were cheaper and required lower taxes; moreover, they were fed by the notion that running schools like private businesses would make them more efficient and effective.

And the movement also brought with it a particular educational ideology, applied to charters and public schools alike: Far from bastions of innovation and progressive education, they were most noted for their easily replicated practices of harsh discipline; excessive testing; and an emphasis on the most superficial, quantifiable outcomes.

Nonetheless, the reform movement had widespread support among Democrats and Republicans—and their wealthy donors. At the same time, they were met with widespread opposition by teachers, students, and parents.

Diane Ravitch has been one of this movement’s harshest critics. Once a believer, she has written several books critiquing it, including her latest, Slaying Goliath. Her work is more polemical than journalistic—she is seeking to take down the “reform” movement’s supporters and sing the praise of its opponents—but nonetheless, it sheds much light on the movement and its problems.

Ravitch calls the proponents of these reforms “disrupters,” for they seem intent on punishing teachers for the failures of society and, in turn, causing massive disruption in the lives of the largely poor children whom they teach. (Charters are disproportionately placed in poor, urban districts.) Moreover, education, for those who run charter schools or “reformed” public schools, must be reduced to quantifiable outcomes through testing.

For both politicians and their wealthy benefactors, it is obvious why such an ideology would have appeal: it reflects an economic philosophy that favors privatization and a technocratic tendency to reduce education to concise, quantifiable outcomes.

While the book is clear on its opposition to charters and their advocates, it sometimes blurs together the various factions that support them. One could imagine, for example, well-meaning people supporting charters, but Ravitch leaves little room for this nuance.

In the end, Slaying Goliath does make a compelling argument—rooted in solid research and information—for why such schools are not working. What is perhaps most striking about it is just how many bad ideas have been advocated by the “disrupters.” As much as they’ve tried to position themselves as rational actors, they are largely blinded by ideology. Even by their own stated aims—test scores—charters have not improved outcomes overall.

Perhaps the most compelling aspect of the book is the way that the disrupters have transformed education. And this isn’t limited to charters. Most public schools—especially those in poor, urban districts—have been impacted by this movement. The logic of “zero tolerance” has often prevailed over restorative practices; the focus on testing has radically altered curricula. Indeed, Ravitch shows that the role that our public schools play in democracy seems to have been lost, along with the deeper and less easily quantified elements of education. It is striking that the elites who advocate for these reforms seldom want them for their own children.

In the end, Ravitch paints a picture of a “reform” movement that has been exposed and defeated. One wishes her optimism is called for. To be fair, there have been significant pushback and victories for what she calls “the resistance.” But it seems that the book points to broader currents in our society that cannot entirely be stemmed with facts. It is hard to imagine the billionaires and technocrats whom Ravitch credits with leading the reform movement simply giving up because of public opinion or research.

Ravitch is an important figure in the world of education, and her voice needs to be heard. She is a writer of considerable skill, as well as an educator who knows this movement from the inside. The disruption she describes was largely enacted by a well-financed campaign that advocated for ideas that sounded good without being fully assessed and analyzed. If we only hear from those with political agendas, our children will be the ones who suffer.

Theodore Richards is a philosopher, poet, novelist, and memoirist. He is founder of The Chicago Wisdom Project and editor of the online magazine Re-imagining Education—Culture—World. His most recent book is A Letter to my Daughters: Remembering the Lost Dimensions & the Texture of Life, winner of a 2019 Independent Book Award Gold Medal for Autobiography/Memoir.