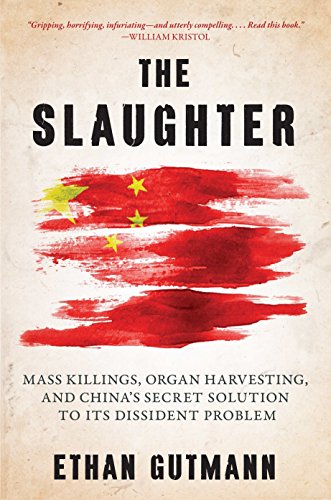 “Mr. Gutmann’s chosen stance is as reporter, not participant. But his understanding of China makes him an ideal narrator, and his intriguing personal life could perhaps have embellished this book with wider insight into this world without diluting the impact of what is a truly important book meriting wide readership.”

The subtitle of Ethan Gutmann’s meticulously researched and carefully deliberated book leaves the reader in no doubt as to the subject matter of what he is about to read: Mass Killings, Organ Harvesting, and China’s Secret Solution to Its Dissident Problem.

If one adds to that information the gruesome addendum that most of the unwilling organ donors were still alive during the extraction of anything from kidneys to corneas, then we begin to understand the veracity of the book’s title.

The party leaders must have congratulated themselves on the dual successes of this policy: They were getting rid of citizens they considered to be dissident opposition members, while making a profit at the same time.

The numbers are of course difficult to prove, but Mr. Gutmann proposes a reasonable estimate would seem to be in excess of 65,000 prisoners of conscience—minority Uyghur activists, Tibetan monks, and predominantly followers of Falun Gong (simply put, an exercise regime combined with meditation)—were slaughtered to order during more than a decade of “harvesting” from the late 1990s that continues to this day.

Without question, this is “indisputably a crime against all humanity” and though it might not be on a par with the numbers of the Holocaust, it definitely is reminiscent of a certain Dr. Mengele.

It was 2006 when reports began to surface of systematic harvesting of organs, but Mr. Gutmann kept an open mind as he began his research. He establishes early in the book that he “anchors [his] work in witness testimony” and indeed has interviewed “over 100 witnesses in depth, across four continents.” The conclusions he has drawn from this research encapsulate not only the horrific scale, but also the dehumanizing details of the supermarket sweep that is China’s transplant business.

One of Mr.Gutmann’s interviews was with Nijat Abdureyimu, an officer who had been assigned to a special police force. He described the “killing grounds” where executions would take place. Unwanted bodies would be “kicked into a trench, the useful corpses hoisted into the harvesting vans.” These vans would be lined up nearby, equipped with crude operating facilities and a medical team.

One day, Nijat heard screams coming from one of the vans and came to realize what was happening. Some of the “executions” were actually taking place on the operating table inside these vans—with no anaesthesia: these organs from live donors were far less likely to be rejected.

While China has claimed that these executions were of murderers and rapists who had agreed to be donors to “repay their debt to the state,” the truth is actually that the majority of the donors were innocent, ordinary people. People who just didn’t fit with the Communist Party’s great plans in life. But in death, each one could potentially contribute something like $200,000–$300,000 to the national coffers if all of their organs were successfully sold and transplanted into the decrepit bodies of organ “tourists.”

There are no registers, with careful tissue typing in China. The process is more of an “informal eBay system because it’s an entrepreneurial business that operates in a gray market.” One recipient is known to have received “eight consecutive livers in ten days until one actually worked.” Harvesting is done to order and depending on the size of your bank balance, the sky’s the limit if the previous example is anything to go by.

If this all seems to be happening so far away, in a country shrouded in secrecy, that it doesn’t impact on the average westerner’s daily life, then consider Mr. Gutmann’s assertion: “The organ harvesting trade is driven by demand from organ tourists.”

For anyone needing a vital organ transplant the waiting list they face must feel like death row, hoping for a reprieve, growing more desperate and more sick by the day. Desperate people in desperate situations take desperate steps, so can we really expect a potential recipient to look closely at the origins of a potentially life-saving organ? This means it is up to governments and the medical profession to balance patient privacy issues with legislation if we are to stamp out organ brokering.

The Slaughter is not an easy book to read, partly because of the subject matter and mass of material included, and partly because of the chosen style of the writer. Mr. Gutmann states in the book that it is “not intended to be a textbook on Chinese organ harvesting,” but this is how the material comes across.

Mr. Gutmann’s chosen stance is as reporter, not participant. But his understanding of China makes him an ideal narrator, and his intriguing personal life could perhaps have embellished this book with wider insight into this world without diluting the impact of what is a truly important book meriting wide readership.