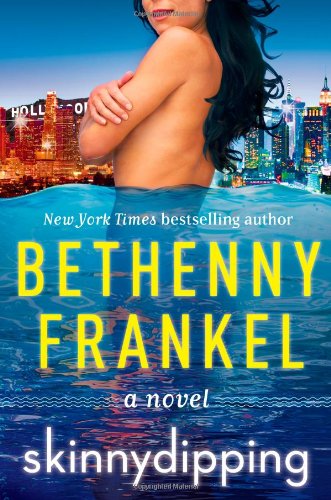 “Self-plagiarism aside, what Skinnydipping lacks is artistry.”

Skinnydipping is an excellent title for Bethenny Frankel’s latest book, given that it suggests both playful nudity and the “Skinnygirl” brand of cocktails that has brought further fame and surprising fortune to the reality show fixture.

But good as it is, it is possible perhaps to go one better with Bethenny Agonistes, because no one in any medium in today’s age of mixed media suffers so well, so often, or so totally—tears in her eyes, jaw taut with will-drenched ambition—or so telegenically. Not since a certain Scarlett taught the world to “fiddle-dee-dee,” all lush in green velvet against a vibrant, umber-hued Technicolor sunset, have the struggles of one perfervid dame seemed so intensely important.

But not even Scarlett in extremis would have dusted the jacket of the book as Bethenny has done. Forget, just for the moment, that this is a novel. That the character named “Faith” is fictitious and not simply Ms. Frankel herself sneaking onto the pages of this tale of L.A. woe and victory, victory and woe.

Concentrate instead on the chutzpah involved in appearing nude on the dust jacket of your novel.

Like Aphrodite on a clamshell, Ms. Frankel emerges from the ocean waves in the all together her flank daintily pointed at the camera, her arms crossed over her chest, keeping it all together. (Bravoites will, if I were to say the word PETA, likely recall the image, as it was much discussed on the “Real Housewives of New York,” among whom Ms. Frankel used to reside before being spun off onto “Bethenny Everafter.”)

That the top half of her face and head have been cropped does nothing to obscure the identity of our Venus; it only serves to make the image a bit more eerie, which might serve as an early-warning sign for prospective readers.

And certainly Ms. Frankel is not the first author to use her own life experience as the basis for fiction. From F. Scott Fitzgerald onward, American novelists have forged art from the raw material of life. But where The Great Gatsby evolved from the passion that Fitzgerald felt for his Daisy and stood captivated by the green light at the end of the dock, the light that signified all yearning, Bethenny Frankel’s correlation between fiction and memoir is far more direct.

It all rather reaches the point of déjà vu. The reader who worked his way through Ms. Frankel’s previous work, the memoir A Place of Yes, gets the eerie feeling, starting right on page one of Skinnydipping, that he has read this all before somewhere.

Skinnydipping begins with our heroine, Faith Brightstone, rushing. She is late for her plane. But luck is on her side. There is one seat left in first class, and she is given it.

Seated, she turns to the gentleman seated next to her:

“I held out my hand. ‘Faith Brightstone. What do you do?’

“He smiled a surprisingly attractive, genuine smile and took my hand. He had a firm handshake. But so do I.

“Really? Wow. That is such a coincidence.’ I said.

“’Not yet,’ I admitted, suddenly embarrassed. I didn’t want to sound like just another MAW—the acronym I’d heard for a Model-Actress-Whatever. I didn’t want him to discount me as somebody who wasn’t anybody. I wanted to sound more intellectual, more significant than that.”

Jumping back to A Place of Yes, we get can trace the source of the story:

“My first big break came when I was nineteen. I can’t remember where I was travelling, but I just happened to be late for a flight. I almost missed it, and they had already filled my seat, so they put me in the last available seat in first class. As luck would have it, I sat next to a producer for the TV show ‘Saved by the Bell.’

“We chatted throughout the flight. I asked him questions about what he did for a living, and he told me he was impressed that a young woman could converse intelligently and be interested in what he had to say . . .

“My new friend the producer told me that he would never normally do this, but he thought I had a lot of potential, and he just might have a position available for a production assistant for an upcoming series of ‘Saved by the Bell’ episodes. If I followed up with him, he said, he would see what he could do.”

Jump back to Skinnydipping and the show ‘Hollywood & Highland’ and our girl gets the part.

In fact, the most fun that a reader can have with Skinnydipping is to dip in and out of it while poking through A Place of Yes and finding not only the many parallelisms in their “plots,” but also the true names of all those involved.

Martha Stewart morphs into the rather dreadfully named “Sybil Hunter.” In the same way, La Scala, the posh restaurant in L.A. in which Ms. Frankel once worked as a hostess (“I made a lot of connections at La Scala”), becomes “La Fenice,” while otherwise, in every other way, staying the same.

Even Ms. Frankel’s little dog Cookie appears under the nom de plume of “Muffin.” And by the time the pashminas turn up in the “novel,” (in her memoir, Ms. Frankel tells her readers of her first claim to fame as “Princess Pashmina,” the purveyor of soft cashmere scarves), the reader’s eyes are rolling around their sockets to the point that he gets a migraine.

The fun of sleuthing out the source material aside, it is safe to say that never before has anyone dug quite so hard at the bottom of the barrel as Bethenny Frankel has here in Skinnydipping. What coulda shoulda woulda been a fun, sexy read for the opening days of the upcoming long, hot summer, reads instead like the sort of book that an author comes up with when busy running a diet cocktail empire—but happen to owe their publisher one more book.

Self-plagiarism aside, what Skinnydipping lacks is artistry. As a supposed novel, the book lacks narrative arcs, changes in rhythm, differing voices among the different characters to make the dialogue vibrate. In short, it lacks all that makes a novel a novel. We get no insight into character save the longwinded internal monologue of the heroine. We get no character development, only a string of autobiographical happenstance. Worst of all, we get something altogether lacking in the one thing that every good novel requires—an active and inquiring imagination on the part of its author.

It is not, in truth, a work of fiction at all. It is, instead, a rote creation.

The reader is never given a sense of place, of time, of surroundings or behaviors or circumstances (as if it took all the author’s skill to change the names of those involved), other than what is reported via a particularly flat first person narrative. That has worked quite well in the past—for the second mistress of Manderlay, for instance—but here it reads as if the Lois Lane for the local weekly were reporting a fender bender or the knocking over of a rural mailbox.

Even those things that should have been delicious—time spent as the personal assistant to that snooty and entitled wife of one of Hollywood’s leading directors, for instance, or the experience of appearing on a reality show, in this case the fictionalization of “The Apprentice” back when Martha Stewart appeared as the wooden-faced harpy of a boss who demanded both obedience and perfection from her cast of would-be apprentices (something that Ms. Frankel should be able to recreate with a good deal of vitality in her writing, in that she herself came in second in that TV competition)—limp across the page as our heroine rises to each occasion, sweats (without ever showing it) and worries about “swamp crotch.”

And yes, crotches do figure into the narrative—a lot.

But not in that Jackie Collins way you might have hoped. Instead we are reduced to concerns of hygiene and whether or not they have been waxed, sprayed, or thonged well enough to be seen or touched by a prospective date.

The pity of it all is that, given what we have seen of Ms. Frankel on Bravo, her quick wit, and her acid tongue, it would be easy to believe that were she willing to put in the time and effort she could have written a novel that would have put Fifty Shades of Grey to shame.

Someday perhaps Bethenny Frankel will live up to her vast verbal potential. Until then, her time might better be spent in front of the cameras rather than at the keyboard.