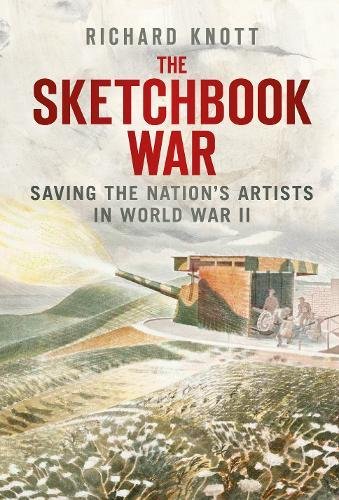 “. . . provides too little about too much, filling in a hole in the WWII record while shedding little light on its chosen subject.”

Most people probably aren’t aware that the British government created a special program to keep its artists at work—and alive—during World War II.

The plan didn’t always succeed, because some of the artists didn’t make it home. But most of them spent the war years traveling the globe to record the breadth and depth of the mighty conflict, capturing nuance and details beyond what photographers and journalists could report.

However, instead of portraying these artists in a linear fashion—each man’s life story, approach, and art as a chapter in itself—Mr. Knott tells their tale collectively in a patchwork quilt covering so much area that the artists get lost in the fabric.

He chose these artists because “. . . each of them was much closer to the front than the majority—they all went abroad; many of them approached the front line; they heard guns firing in earnest; two were torpedoed; two were taken prisoner; and three died . . .”

. . . thus providing interesting reading even if you can’t keep track of who’s who, where, or when. At least the author included a chart in the appendices that summarizes that information.

The narrative proceeds chronologically, from the darkening shadow of war in 1939 when the WAAC program was conceived through its conclusion in 1945.

In each phase, the artists are tracked in constantly switching viewpoints and writing styles that contrast and compare their circumstances and movements. It’s surprising how often they crossed paths with each other in their trips around the world.

Mr. Knott’s collage style will sharply divide readers into history buffs (general interest and WWII specific) who find the material fascinating and satisfactory, and art buffs who come away disappointed.

The book tells us much about the logistics working under extreme conditions—keeping paints wet or dry, acquiring paper, getting drawings and paintings home intact—but little about who the artists really were. It offers even less of their output.

Limited probably by production costs, The Sketchbook War provides only 16 color plates of nine artists’ work over six years, then fails to tie them to the narrative (i.e., during the story behind a particular painting, there’s no reference like “See Plate X” that links facts and work together). The paintings also are arranged more or less chronologically rather than per artist, exemplifying the book’s emphasis on the war rather than the painters.

Perhaps their artwork is better suited for a coffee table book. For this conventional historical narrative, we get only a teasing sampler of finished color works among the black-and-white photos of their sketches and doodles, candids of the artists and other key players, and snapshots of their residences.

All very interesting . . . but do we really need photos of receipts, memorial plaques, supply lists, licenses, invoices, and unoccupied vehicles? These take up space that would be more meaningfully filled by B&W representations of the art.

The Sketchbook War, thus, is very sketchy. Because it covers so broad a topic, it can’t go beyond toe-dipping into specifics without becoming an encyclopedia. Readers hungry for details will not have their appetites quenched, even though Mr. Knott clearly did his research.

The book provides too little about too much, filling in a hole in the WWII record while shedding little light on its chosen subject.

Yes, it’s helpful to know about the conundrums of pay and rank for people who are neither civilians nor soldiers; how they managed transportation and lodging when so often not really part of any outfit; how they figured out what to draw and managed it in a full range of climates; how to cope with being “rootless, lonely, never settled for long enough to make friends, and with no one interested in what they were doing.”

But what we really want to know—the biographies of men whose artistic sensitivities were thrust up against the horrors of war, and how they expressed their responses—is left mostly to the reader’s imagination.