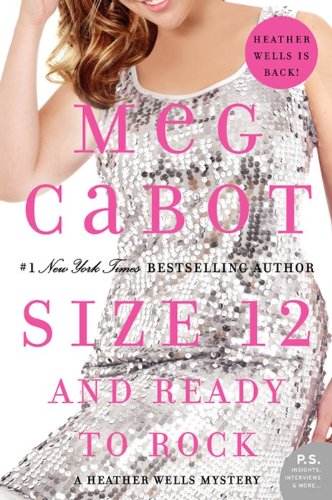 Many may best know Meg Cabot as the author of the young adult series The Princess Diaries. She’s also a successful writer of adult fiction. Size 12 and Ready to Rock is the fourth book in the Heather Wells mystery series for adults.

Heather Wells is somewhat of a has-been. Her days as a pop sensation are over. Gaining a few pounds will do that when your record label thinks you’ve lost that “it girl” factor. Life doesn’t get any sunnier when she walks in on her fiancé Jordan Cartwright bedding her replacement, up and coming pop star Tania Trace.

Heather’s not about to give up on love. It may not have been planned, but she’s found her match with Jordan’s brother Cooper and neither Jordan’s discomfort with the idea or the shenanigans of a murderer with an axe to grind, is going to get in the way of her walk down the aisle or her duties as an assistant residence hall director at New York College—even if it is supervising the occupants of the “Death Dorm.”

Crazed teen girls and their mothers, the needs of a reality TV show, nor a maniacal killer, are a match for Heather Wells when she makes up her mind to get the job done—or are they? And just what is the secret, Tania Truce is hiding? Is it the key to solving the murder and preventing another one? Or will Heather lose the love of her life and more—again?

If you’ve only read Ms. Cabot’s young adult books, you’re missing out. Size 12 and Ready to Rock showcases her witty, humorous, and keen ability to craft an effective and engrossing mystery. There are shades of Sophia Kinsella and Chelsea Handler in this thoroughly lighthearted, but definitely not lightweight story.

Each chapter starts with the song lyrics of protagonist Heather Wells or her quasi-rival Tania Truce, an entertaining and fun way to infer where the story may be heading and add your own musical spin on the lyrics.

There are several simultaneous plot points to keep the tale interesting and enough twists and turns to keep you guessing what’s going to happen and anxious to learn if you’re right.

Size 12 and Ready to Rock may be the fourth book in the series, but if it’s the first book encountered, it gives an excellent sense of who Heather Wells is as a character. Reading this book will only make one more intrigued with earlier books to learn more about her and how weight gain has played a significant role in her life. Weight is such a huge factor in many women’s lives, and Meg Cabot has certainly captured its emotional aspects as a continuing thread throughout this series.

Meg Cabot expertly blends a fun story with weightier, more serious issues such as stalking and domestic abuse. Not every writer would have the skill to pull this off. Get ready for laugh-out-loud moments and heart-pounding intrigue as the reader is led down the path of another Heather Wells adventure.