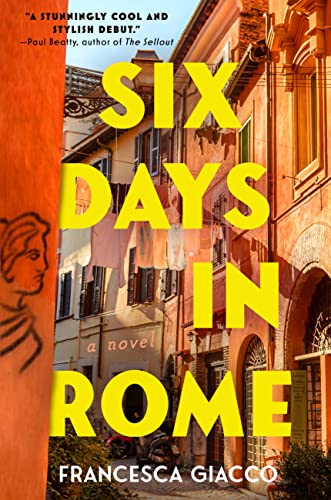 There are summer beach reads and then there are summer European beach reads. And Six Days in Rome, a debut novel by Francesca Giacco, fits the second category in a wonderful, languid way. It’s as tasty as one of those gelatis that come up again and again in this book and as easy paced as a hot day in the Borghese Gardens.

The novel’s heroine Emilia has the perfect name for this city as she notes in the book’s first line: “My name is everywhere here.”

The setup is that Emilia was supposed to be taking her six-day holiday with Michael, the love of her life. Michael is a writer, an intellectual, in touch with Emilia’s every nuance but, if he sounds too good to be true, he is. After two years, he reveals he’s married and loves his wife, whose been on a very long sabbatical, even more than he loves Emilia.

The problem is that Michael, who knows Rome quite well, has planned this trip and there are reminders of him every time Emilia consults his list of suggestions. She is staying where he said to stay, eating where he said to eat, and visiting his favorite places.

But there is one thing about Emilia that makes her different than perhaps many other women who might find themselves in a similar situation: She is the daughter of an internationally famous singer/songwriter. And there are enough hints dropped by the author that we know exactly which singer. It’s clear from the moment it’s revealed that her parents met on the Greek island of Hydra and that Emilia’s father is based on Leonard Cohen.

Her father is a ladies’ man just as Cohen was reputed to be, but the difference here is that Emilia’s father marries his Greek sweetheart, and she stays with him no matter how often he strays.

And then there’s the matter of Emilia’s father’s most famous song. It seems it is based on a small poem written by Emilia when she was seven years old. Her father spotted the poem on the refrigerator and wrote a song around it that became the heart of his catalogue, the one the fans clamor for. Even though her father gives her credit in every interview and every time he sings the song, Emilia is conflicted. Did he steal from her, take what he wanted when she was just a child? Is he that selfish?

Emilia goes through a lot of mental torture about this song and her father. Sure, he’s a great singer/songwriter, but is he a selfish bastard and how does that play into her relationship with men like Michael?

Emilia is an artist in her own right, a visual artist but, although she is capable of painting arresting canvases, she “settles” for popular line drawings that are disposable, easy to draw, and sell like hotcakes online. It’s how she makes a living.

“Now at least one hundred people buy my prints every month, nail them to their walls, post pictures, and show them to the world,” Giacco writes. “They tag me in those photos. I share them back, and on and on it goes. Everyone mutually appreciating and affirming one another—them on my work, me on their good taste. Or, maybe more realistically, it’s just a circle jerk, all printed on acid-free paper, everything numbered and signed.”

That’s one small example of the inventive writing in this novel. Her protagonist may be cutting corners, but Giacco is going all out. This is a dreamy literary novel filled with sentences to devour on summer park bench.

Halfway through her six days of wandering around Rome in Michael’s footsteps, Emilia comes across a new man and lover named John, an American who has fled to Rome to escape the death of his young child. His marriage couldn’t bear the strain, and now he’s in the city of the seven hills trying to disappear.

But Emilia sees him. He is not as accommodating as Michael, and they get into an argument about why she allowed her father to steal her work and turn it into her own. At the same time, Emilia recalls a recent argument with her father when he berates her for not giving full bloom to her art. She accused him of being selfish.

“Selfish?” her father asks during one brutal argument. “Well maybe I am. But at least I followed my talent, did something with it.”

There’s a lot more going on in this novel than just a love story set in Rome, but that just adds to its overall quality. It’s the perfect summer read, whether you’re in Europe or not. And there is eternal question of whether someone stays in a foreign city after meeting a new love or will Emilia return to New York. Read on. . . .