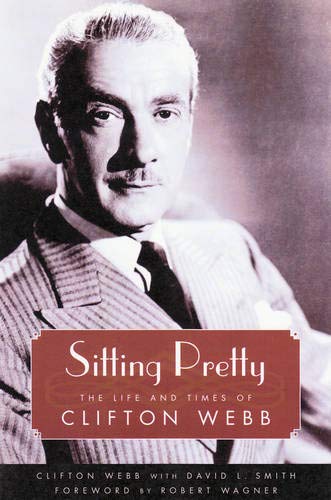 Had the word “effete” not already been coined, author David L. Smith would have had very little to say about actor/entertainer Clifton Webb in his new book, Sitting Pretty: The Life and times of Clifton Webb. He was, it seems, a rather effete man who played effete roles in black and white motion pictures.

He was also, it seems, notably “discreet.”

Nor does it seem to have been kept a secret in his lifetime. Reportedly, when, in 1952, director Jean Negulesco asked Webb a direct question, “Are you a homosexual?” Webb pulled himself up to his full height and said, “Devout, my boy . . . Devout.”

These facts only serve to add fuel to the fire: “Dapper” Clifton Webb was inordinately devoted to his vivacious mother Mabelle (who was born a far less vivacious “Mabel” before she changed it). The two of them were inseparable to the point that she moved to California with him and lived in the same house with him and acted as hostess for all his Hollywood parties. At these parties she was well known for performing her own version of the can-can. She stayed until she died at the age of 91, leaving Webb inconsolable and leading Noel Coward to quip: “It must be tough to be orphaned at seventy-one.”

And yet, those who knew him well in his Hollywood years, like producer Richard Zanuck reported:

Indeed, Clifton and Maybelle were often smirkingly referred to as “Hollywood’s happiest couple.”

In the late 1950s, Clifton Webb contacted his good friend Bennett Cerf at his publishing company, Random House to see if Cerf would be interested in having Webb write an autobiography. He was. Cerf sent Webb off to write it and waited until 1962 to contact Webb to ask after his progress:

“It has been some months since I have talked to you about the autobiography you were contemplating. I earnestly hope that you got started on this project or at least have given it some further serious consideration. I know this will be a fine book if you ever get it finished, and on that we will be very proud to publish under our Random House imprint.”

Webb had, in fact, been working off and on his memoirs since 1950. He had gathered together all his papers. He had talked himself hoarse narrating his life into a tape recorder. He had hired at least one collaborator who had fled upon seeing the organization of the project. And he had flustered and fumed over the concept of the autobiography in general.

“Truth is a desirable quality in an autobiography,” he said, “though obviously not indispensable, and candor, I have found, compels me to put certain persons and events in a revealing, rather than a flattering light.”

With this, Webb announced to Cerf that his project was “bogged down” and set to work on other projects.

It was not until David L. Smith came upon John and Betsy Neylon’s collection of Clifton Webb memorabilia while researching for a book on Webb’s life that anyone was aware that Webb had indeed finished the first six chapters of his autobiography before his death in 1966. Coauthor Smith received permission to use these chapters and the other assorted papers in the collection and these altogether form the heart of Sitting Pretty. Taking the co-author’s credit for himself and giving the rightful author’s credit to Webb, Mr. Smith acted as editor for the project and wrote the concluding chapters from his own research.

The result is an odd and oddly compelling combination of biography and autobiography in which the subject gets to speak for himself a good bit of the time, but, thanks for the co-author’s objective viewpoint, doesn’t get away with much in the way of “candor” or hyperbole in the end.

To read those first six chapters of Sitting Pretty is to hear Mr. Belvedere’s voice ringing inside your head, which is not an all-together unpleasant sensation. It’s just that Belvedere tends to go on and on about a thing. And that thing he goes on and on about, of course, is Maybelle:

“Maybelle does not bear the slightest resemblance to Mr. Whistler’s notorious mother. My mother is short, plump, blonde, dimpled, with what the Viennese fondly term gemutlichyn. It is immensely to her credit that she survived a Kentucky childhood without melting, like so many ladies of that time and place, into a mass of giggling affectations the color and consistency of butter.”

When Webb finally sums his mother up, it’s as follows: “Maybelle offers that expensive combination of a soubrette exterior and grande dame standards of behavior.”

In other words, Mrs. Belvedere.

Among his chief roles were Mr. Belvedere, the author-pretending-to-be-babysitter in Sitting Pretty, and its sequels Mr. Belvedere Goes to College and Mr. Belvedere Rings the Bell, the embittered husband and father (opposite Barbara Stanwyck) in Titanic, murderous Waldo Lydecker in Laura, and John Philip Sousa in Stars and Stripes Forever.

At the time of his mother’s death in 1960, Webb had completed all of his major film work. He would, in fact, complete only one more film, Satan Never Sleeps, before his own infirm health caused him to retreat from the world. With chronic heart and digestive ailments, Webb was hospitalized in October, 1966. He died on October 13, 1966, just short of the anniversary of his mother’s death on October 17.

Noting that Webb could likely not face the intense remembrance of his mother’s death, Smith gives the final summation to Noel Coward, by quoting from his diary:

“Poor Clifton died two days ago. Another old friend gone. For his sake I’m glad. He’s been miserably ill for a long time now. He was dreadfully preoccupied with his own health, poor dear. If Mabelle had died ten years earlier he might have survived better, but she left it too late and he wrapped himself in grief and dread every morning when he woke. He used to be such good company in the past. Age defeated him. I wonder if it will defeat me? I feel it won’t, but you never know. Invalidism is a subtle pleasure.”

Sitting Pretty is filled with enough anecdotes to keep movie fans happy and intimate details enough for gossip fans as well. Best of all, the many pages dedicated to the filming of Webb’s first and best film, Laura, (for which he received an Academy Award nomination for Best Supporting Actor), will give even film students new insights into the creation of a truly classic film.