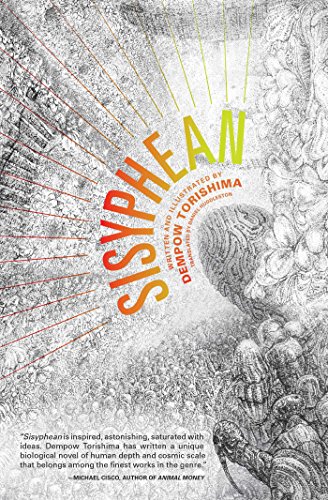 “Sisyphean is a challenging read, but love it or leave it, one will come away with a deep admiration for its ideas, genre boundary breaking, immersive world-building, and the amazing imagination that produced it.”

Translated from Japanese by Daniel Huddleston, Dempow Torishima’s Sisyphean consists of a series of four novellas set in a grotesque but familiar universe. It’s a challenging, dense, and provocative read, and quite possibly a work of mad genius.

In “Sisyphean,” the first story, a worker emerges from a sleeping pod each day to work in an oppressive facility for the President, an amorphous creature once called human. Purpose-built for slavery, this genetic technician endures horrifying working conditions to build bones, organs, and tissue for important clients. Here’s a taste of his workday in the lab:

“Using tweezers, he plucked off the wing, and with it came vivid, sunset-pink muscle tissue that had been connected to the wing axis. It was still expanding and contracting. Frightened, he threw it to the floor. The wing with its attached flesh traced out a parabola through the stagnant air as it fell to the grated floor. There it stuck to the grate for only a moment before being snatched away by a tentaclelike appendage from beneath.”

The worker is beginning to question who he is or where he came from, with horrible consequences due to biological failsafes designed to prevent this from happening.

In another story, “Cavumville,” a student lives on a moon whose population is reborn with random mutations, and whose entire technology and economy is based on strange harvested animals. Picture panes with marrow ink, chairs with the seats made of pelvic bone, school boards made of skin. Here’s an excerpt of harvesting occurring after a “Descent from Heaven”:

“Hanishibe thanked them gladly and set off running. He had now gotten used to running on this unstable surface. The road ahead, however, was blocked by a single gigantic momonji. A quartet of ebisus were effectively using their long forearms to push it backward as it twisted its thick trunk in resistance. Like a loaf of bonemeal bread, its body was of uniform thickness and covered in white down through which its rippling, pale-peach skin could just barely be seen. Whenever one-half of its body reared upward, a double row of claw-legs could be glimpsed. Completely useless for locomotion, they were one more example of all the unnecessary body parts momonji had.”

The student seeks to uncover why the residents are brought back from the dead in new life forms, what happened before his current life, and what happens in the next. He becomes an instrument of enforcing rigid official orthodoxy until he begins to glean the truth of his world.

The rest of the stories continue in this biopunk, Kafkaesque vein, resulting in an intimate visit to a universe marked by familiar flashes of humanity amid strange cultures, grotesque ecologies, and not a little body horror. With this work, Torishima seemingly invented a unique and hard-to-imitate brand of biological SF, a transhuman dream in which humanity has been grotesquely and irrevocably altered, and in which life goes on.

Warning: This is not an easy nor a fast read. In fact, it’s often exhausting. Every page is dense with arcane words, terminology native to the universe, and numerous strange concepts and cultural practices presented as matter of fact and often without explanation. In many stretches, the story becomes virtually opaque, even during a passage that is otherwise titillating, resulting in a story that is sometimes felt rather than understood, not so much read as digested. In the end, Sisyphean isn’t so much a love or hate experience as “love it enough to stick with it or not.” It’s certainly a novel that asks its readers to accept it on its own terms. Daniel Huddleston deserves quite a bit of credit for translating this work into English.

The novellas appear to be interconnected by a series of story fragments depicting a plague of nano dust that is alive and disrupts a spacefaring civilization. They don’t weave together so much as combine to suggest some overarching truth that appears determined to remain obscure. One might interpret the civilization’s “seed ships” as already transhuman and the dust as a mutating plague, causing life to spin out in new evolutionary forms on multiple worlds, but that might be oversimplifying it. Readers will have to interpret what’s going on for themselves.

Otherwise, common motifs connect the stories, including basic human needs and wants translated through an alien filter, cultures forgetting and then attempting to rediscover their origins, and heretical ideas challenging established truths and disrupting societies as a result. All deeply rooted in a transhuman universe where life itself is both technology and economy.

Overall, Sisyphean is a challenging read, but love it or leave it, one will come away with a deep admiration for its ideas, genre boundary breaking, immersive world-building, and the amazing imagination that produced it.