Sister Spit: Writing, Rants and Reminiscence from the Road 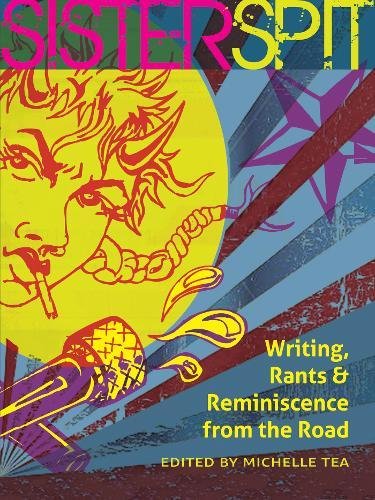 “Sister Spit is worth rooting for.”

This is the tale of the queer-cabaret version of Lollapalooza.

Instead of a rock show/music festival with dance performances and craft booths, Sister Spit tours in a van and brings a changing roster of both well known (Dorothy Allison) and lots of soon-to-be-knowns.

Like Ali Liebegott. “It was 1994, the year of bad low blood sugar decisions.”

And Tamara Llosa-Sandor. “Living in Eugene is like dating a girl you’re slightly embarrassed by.”

Nicole S. George’s cartoons owe a lot to Alison Bechdel’s Dykes to Watch Out For.

Sister Spit started in 1994 and was striving for the energy of punk married to spoken word bravado of a poetry slam. At their first open mike night in San Francisco the show wanted to make it seem like anything might happen.

Fifty women signed up that first night, and in 1997 the show morphed into a traveling caravan. And it still seems like anything can happen.

The introduction of the book is perhaps the best writing, a history by Ms. Tea recounting the very highs of the road in these early days—a traveling slumber party with all the cool kids—as well as its lows. That would be the van breaking down on the Alabama/Mississippi border on a Friday at midnight. But Sister Spit perseveres and low and behold not only do they break even, they make money.

It’s tough to write about life on the road, which is why most memoirs are funny stories stitched together with show dates. It takes some insight to say why one night goes so well and another is just OK. Maybe it’s unknown—at one time Nelson urges the audience to dress better—for inspiring the performers. It’s also tough to write about spoken word events, because so much of the vibe comes from being there.

Sister Spit is worth rooting for. They are out there trying to change the world. Go to a college town near you and support that effort if nothing else.