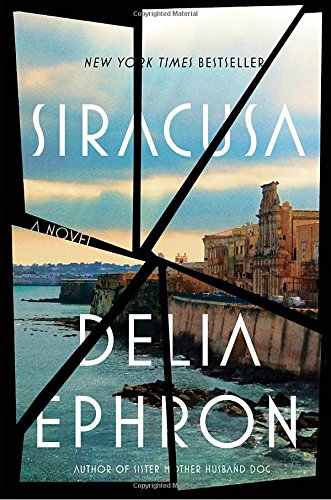 "Siracusa is an easy, engaging read that should find itself on many vacation reading lists."

There’s nothing like the company of a great book while traveling, a novel that demands the reader return and rewards him or her with the type of pleasure approximating a delicious secret. Writer Delia Ephron has come up just such a conceit in Siracusa, a frothy travel book about two couples vacationing in Italy. And while it may fall short of greatness as literature, it’s achieves every one of its five stars as a book to carry on vacation.

The story revolves around two upwardly mobile couples with more than their fair share of problems, many of them brought up by their selfish personalities. There’s Michael, the once-great, now-struggling New York novelist, and his wife Lizzie, a once-in-demand freelance writer who is reduced to searching for ideas—any ideas—to re-launch her dormant career. They are childless.

In the other corner is Finn, a Portland, Oregon, restaurateur and poseur who likes to speak French while picking up young European women on his nightly crawls. His wife is Taylor, a natural beauty, Ephron assures us, who is accompanied step-by-step by her mini-me, the couple’s ethereal 10-year-old daughter named Snow.

That’s the setup. The complication is that Finn and Lizzie are friends with multiple benefits and orgasms. Taylor, meanwhile, is the prototypical ice queen who no longer is interested in sex. What’s she interested in is Snow and interest is far too mild a word. Try obsessed. Taylor makes sure Snow is always near her, almost. One of the few times Snow is able to slip out of her mother’s grasp, the unthinkable happens.

And then there’s Michael who is having his own affair with a 20-something waitress totally in thrall of the older, wiser writer/cad. Textbook except for the actions of that 20-something who blows up the vacation in a way you won’t see coming.

Even without all the complications, these two couples are very different from each other. Taylor plans everything, Lizzie nothing, and the two men seemingly go along with whatever each wife has in mind though clearly they have minds of their own.

The vacation the two couples take works to heighten the four very different personalities and creates tension, as vacations often do. It’s all very volatile and that’s before a match is struck to set the plot afire.

Watching the grown-ups very carefully is 10-year-old Snow who has a flat affect and doesn’t say much. But she’s doing a lot more than watching as Ephron reveals.

Siracusa is an easy, engaging read that should find itself on many vacation reading lists.