A Sinking Ship is Still a Ship: Poems 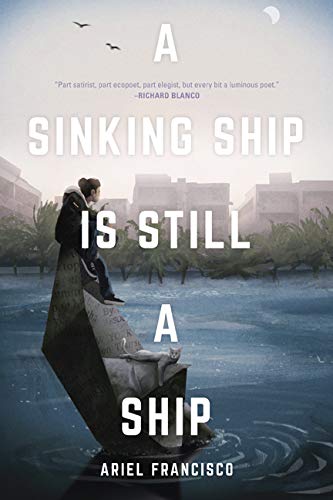 The poems in A Sinking Ship Is Still a Ship are poetry as ode to the future of hidden, buried things, be they land, soon to be overcome by rising tides and disappeared, or memories of the makeshift home that the state of Florida, and the city of Miami in particular, will have been to so many.

The notion of state as home in the familiar sense, composed of bits of life experienced and remembered, brought over and used while waiting for the sea to ultimately savage them, is ever present in these works by Ariel Francisco, each poem haunted by the sea of rising waters and its partners, the seas of time and memory, the three having already begun the work of eroding whatever life is being lived, the continued climbing of waters not yet truly noticed.

Here is Francisco with “Harvest Moon—The Tide Rises Almost to My Door: A golden shovel, after Basho”:

“When the ocean comes to harvest

our cities under golden moon-

light, how long with it take for the

morning to come? What will tide

you over the water that rises and rises

with a perpetuating lie? Almost

will soon become now, so where to

go from here? When waves reach my

In addition to being a tour de force in line-breaking,  this poem is a good example of the melancholic underwater depths of unease with which each piece in the book lives, as if the exquisite restraint of form were the only thing keeping the poems from the rightful hysteria of death by submersion’s imminence considered. Here, then, is “My Mom Tries to Convince Me to Buy Her a House”:

“I tell her I have no money

And she says that’s fine, you

I say my credit is shit, she says

that’s fine mijo, someone will finance

you, it’s the American way. I groan

Miami will be underwater in forty

or fifty years, so what’s the point?

She laughs and shrugs and says

that’s fine, I’ll be dead by then and—

Meanwhile, for the people as narrators in Francisco’s sinking ship, the state as house is sustained by the floating and bobbing of circumstance and perspective, of political, social, even biological change, its residents either immigrant victims of nostalgia for the fuzzily-remembered roots of an identity pulled up onto the boat of time at the last minute, or retirees pining for the Blue Moon 50s, all of them Floridians in the end, working overtime to capture places in time that never really existed as they remember them.

But just like in Florida, the pessimism that permeates everything in this book is polka-dotted with rays of sun, and never swatted away no matter how unexpected, as in these lines from “Autumn Does Not Begin In Miami, Florida”:

“The temperature refuses to drop

in their green without worry,”

And so it is, what it feels to live in Miami. In Florida. It is this, and A Sinking Ship Is Still a Ship is at its most phenomenal when accurately capturing the worlds that coexist within this pointed corner of the country, and you, the reader who knows, can say, “yeah, that’s exactly what it’s like, what it’s really like.”

Yes, there in “Don’t Ever Come to Florida,” but also in “305 Till I Die” is the angst of something always happening, often (really) weird, distracting from the other angst over what is being buried by time, by a hurricane, a tornado, by water rising above you, all around you, around and over your home, as you struggle to claim the soil sliding away by naming, naming, naming (big Native American and Asian Haiku form influence throughout) to remember, knowing there may not be time to claim, to rescue, later.

In the end, perhaps all of this hanging on to things is about love and the inevitability of heartbreak from loss through change, as in “On the Eve of the Largest Hurricane Ever Recorded My Ex Tells Me She Hopes I Don’t Die and, I Mean, Like, Whatever”:

“There’s a howling that barrels

through the lonely static of night.

To drown myself in. My phone

lights up with tornado warning

after tornado warning, an escort

of destruction dancing around a

inhale after a gut-punch. This is

unexpected. Your words I mean

Not enough for warmth, but it’s

something. In this darkness, I can

at least allow myself this one tiny truth.”