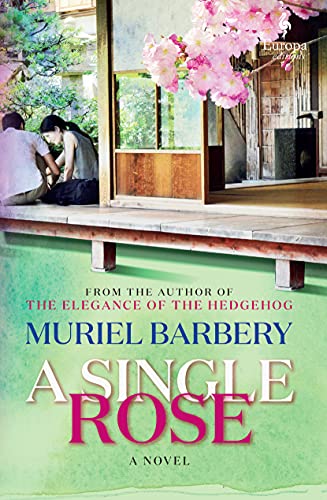 “this novel offers the pleasures of a poetic travelogue and an homage to a place and culture . . .”

Muriel Barbery’s new novel takes place in Kyoto among temples, gardens, and teahouses experienced by Rose, a reluctant, resistant visitor. Rose, a Parisian botanist, has been summoned to Kyoto for the reading of her father Haru’s will—the Japanese father she never met, the father she resents for seemingly abandoning her.

Rose is the accidental issue of a brief affair between Maud and Haru. As far as she knows, he never attempted to reach out. She grew up in her French mother’s homeland. Her emotionally distant, depressed mother Maud “inhabited her sorrow the way a fox inhabits its den . . . unchangeable in her sorrowful castle” and committed suicide some years ago. Rose loved her late maternal grandmother who nurtured her and taught her to love flowers. Now 40, Rose is profoundly solitary, more alienated than lonely.

As the novel begins, Rose is jet-lagged, confused, and furious as a child at her neglectful, mysterious father’s belated, posthumous summons. She stays in his elegant home, among beautiful flowers and art, waited on by his maid and his chauffeur. She learns Haru was a renowned collector, agent, and patron of Japanese artists. Rose also discovers a gallery of photographs of herself at every age; he tracked her constantly from a distance. Inhabiting his space, she experiences a tentative, ambivalent connection with her deceased father, begins to sense “something living, an attentive silent ghost.”

Her father has designated Paul—a longtime French expatriate, Haru’s assistant, confidant, and friend—to guide Rose throughout the city in the days leading up to the reading of the will. Paul, the widowed father of a young daughter, escorts Rose along her father’s proscribed itinerary of significant temples, gardens, cemeteries, as well as Haru’s favorite restaurants, bars, and teahouses.

Over the course of this brief novel, with Paul as escort, and her father’s retainers always at the ready like the servants of a fairy tale, Rose explores Kyoto and indirectly encounters her late father. She cannot resist the spell of the spare beauty of rock and water, leaf and flower, nor the unique and subtle flavors of sushi and sake. And while the sensory palette of Kyoto’s contemplative gardens, temples, art and cuisine seduces Rose, she is equally attracted by the gentle, reserved Paul. His melancholy and mystery offers a more sympathetic reflection of Rose’s angry hurt—she prides herself on being a “pain in the ass” while he is quietly sad. The two bond and attempt to assuage spoken and unspoken individual sorrows with copious sake, beer, and an occasional cleansing ceremonial bowl of tea.

The events of the narrative unfold with a steady inevitability. It seems preordained and is amply foreshadowed that Haru’s will must contain a life-changing material bequest for Rose. Equally clear from the outset is that Rose will inherit Paul as well from her late father.

The gradual, unsurprising reveal of a new beginning for Rose’s journey, the flawlessly smooth narrative arc is somewhat problematic. Barbery’s cool, elegiac tone, pace, and the novel’s artful, formal structure are lyrical, controlled and subtly sensual as the world of aesthetic and personal experience Rose awakens to in this story. However, the novel’s structure, the story’s content, and Rose’s development fit together so seamlessly it mitigates against narrative tension.

Likely, this is very much an intended effect. The formal congruence between character, setting, and story creates an effect of ceremonial spectacle, like a Noh drama but on a modern, domestic scale. Occasional welcome and delightful, engaging passages do occur when cracks in the artful surface of the novel reveal human warmth. Haru’s friend, a drunken poet, a Hiroshima survivor, carouses with Rose and Paul. Rose compares the temple Ryoan-ji to “a giant kitty litter box.” And poignantly, Rose stands at her father’s grave and “something inside her fluttered like a dragonfly.”

For the reader who enjoys the restrained tone and pace of Japanese authors like Kawabata, the spare profundity of Japanese poets like Issa, the unique palette of Japanese food, the profound, complex simplicity of Kyoto’s temple gardens, this novel offers the pleasures of a poetic travelogue and an homage to a place and culture. And for more general readers, Muriel Barbery’s A Single Rose is a modern fairy tale, a re-imagining of the story of the thawing, awakening, and rescue of solitary Rose, an evocative, transplanted retelling of the tale of a sleeping beauty.

Ellen Prentiss Campbell’s novel Frieda’s Song was published in May 2021. Known By Heart: Collected Stories, appeared May 2020. Her debut novel, The Bowl with Gold Seams received the Indy Excellence Award for Historical Fiction; Contents Under Pressure: Collected Stories was nominated for The National Book Award. Her short fiction has been recognized by The Pushcart Press. An essayist and reviewer, Ms. Campbell is at work on a new novel.