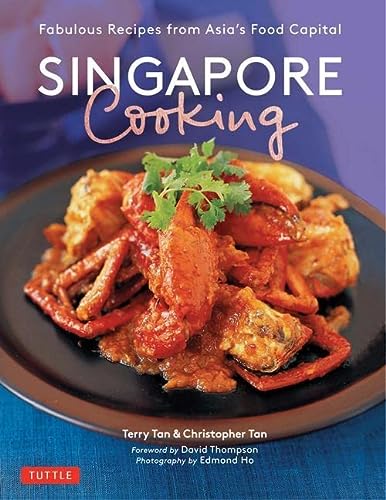 “If you love to cook, are undaunted with unique ingredients, and want to capture the flavors of another land, accept the challenge and get cooking.”

In the late 1800s and early 1900s, chop suey houses were all the rage. Opening early and closing late, they were a place to get a good, cheap meal no matter what time of day or night. Over the following decades chop suey and chow mein remained the go-to dishes for those ordering Asian food. It wasn’t until the late 1960s that American diners discovered other regions of Chinese cuisine, Hunan and Szechuan being the first two major ones. For those who loved the flavors of Asia, Malaysian, Indian, Thai, Korean, and Vietnamese were also added to the selection of what to eat and cook. But Singapore gastronomic endeavors were often overlooked.

To those in the know, Singapore cuisine has always been, as Terry Tan and Christopher Tan write in their forward of the cookbook Singapore Cooking: Fabulous Recipes from Asia’s Food Capital, a topic of utmost importance.

“Some wag once said that the quickest way to start a debate in Singapore is to walk up to a random group of people and ask them “So where can I get the best chicken rice?” the two Tans write in the book’s foreword.

Looking through this glossy paged book with its full-color photos and 100 recipes including those for such dishes as Ayam Tempra--Chicken Braised in Spicy Sweet Soy, Gulai Prawns with Pineapple, Nangka Lemak Young Jackfruit Coconut Curry, and Coconut Pancakes with Banana Sauce, it’s easy to agree that Singapore gastronomy is all “shiok” or in other words “sublime and unspeakably wonderful.”

But though it all sounds delicious, this isn’t necessarily an easily accessible cookbook. Ingredients such as dried prawns, pandanus leaves, and tamarind may mean for many not only a search or special trip to an Asian grocery store but also an added expense and one where they’ll wonder when they might use the product again. Despite this, for anyone who wants to explore a multicultural cuisine that encompasses influences from many of the surrounding countries as well, it is very much worth the effort.

To make it easier for the novice, the authors have organized their book into chapters such as “Marinades, Chutneys, Sambals and Achars” and “Breads, Rice and Noodles” and included a nice glossary of ingredients (with photos!) as well as a brief history of Singaporeans cuisine.

If you love to cook, are undaunted with unique ingredients, and want to capture the flavors of another land, accept the challenge and get cooking.