Sing to It: New Stories 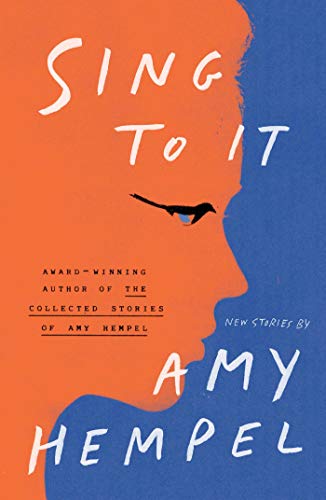 This is Amy Hempel’s first book in 13 years. The gap between volumes isn’t entirely surprising for an author known for her minimalism, and the new book reflects that reputation: less than 150 pages of fiction, meted out a few paragraphs at a time.

Some stories are as brief as poems. The title story encompasses an entire relationship of love and death in 115 words. Its core is beautiful and enigmatic: “At the end, I wanted to comfort him. But what I said was, Sing to it. The Arab proverb: When danger approaches, sing to it.”

The danger in Hempel’s stories is oblique. It creeps up in the midst of safety and cracks open retired lives. In “The Chicane,” a niece follows her late aunt’s seducer of 30 years before. The aunt is long dead: she committed suicide while still young, in the midst of another relationship. Her death is anything but enigmatic: She died on the phone, recorded by a local police commissioner. In the face of that bluntness, the niece seeks other, subtler secrets that might reveal some version of the woman not yet known.

The doyenne of “Greed” feeds on husbands. The hackneyed trope acquires new malevolence in Hempel’s treatment. Husbands might no longer be sources of support for women, but their embodiment of trust makes them fragile creatures, ready to crack open. Small details reveal betrayal: “A thing between them: green apples. Never red, always green. I knew when my husband had entertained Mrs. Greed because a trio of baskets in the kitchen would be filled with polished green apples. My husband claimed to like the look of them; I never saw him eat one.”

In “Fort Bedd,” “the second ‘d’ is silent,” and the bed provides a temporary refuge for a couple badly in need of a permanent one. “The Second Seating” takes friends of a dead friend out to dinner at an elaborate restaurant, where they eat meal after meal, denying their table to others. In “Moonbow,” a bear stops by for the night.

Other stories wear their fears on the surface. The knife he uses to attack connects the victim of a home invasion and the wife of the perpetrator in “The Correct Grip.” “A Full-Service Shelter” sets volunteers at a city-run animal pound against administrative indifference and the hard tragedy of inevitable death. Much as they struggle and put off the end, the dogs lurk, unadoptable, in a place whose “full service” is euthanasia. The dogs are central, knowers of people and universal truths, staring down their impending doom.

The raw pain of “A Full-Service Shelter” sublimates but never eases in the novella that anchors the collection. “Cloudland” moves more slowly than most of Hempel’s work, only gradually revealing its emotional depths and terror. A nameless narrator retreats from New York to work a few days a week as an in-home carer for the elderly in semi-rural Florida. She rents a falling-down house. The neighbors stop by to complain about the state of her yard and remind her that rising sea levels are “controversial.” Best not buy into the theories of impending doom.

But doom lurks at every turn. The narrator has lost friends to AIDS and the Twin Towers attacks. “SNAKES” announce themselves on signs in the botanical gardens and lurk, unannounced, in the unmown grass.

Ostensibly, she has come to this apocalyptic landscape to escape her disgrace as a teacher, but the narrator’s misery runs deeper. In her youth, she loved Maine, a place to retreat, to play, and (in the spirit of The Ciderhouse Rules), to have a child and give it up for adoption. That child haunts her, following her daily routine and manifesting in children around the narrator without real regard for how much time may or may not have passed.

This is not John Irving’s difficult and heartwarming novel of orphans and abortion, though. This is a novella that reminds us that “there must be a word for the state of going about your business without knowing something key, and with someone else knowing it, and knowing too that there could come a time when you will know it.” Each revelation is banal, but each reveals an apparently benign history as just that much worse.