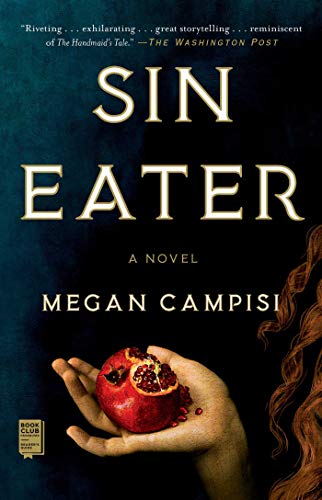 Sin eaters are historically marginal figures, outcasts of Britain who ate bread from coffins to absolve the sins of the dead. In her first magnificent novel, Megan Campisi has taken this obscure practice and re-framed English history around it. Teenaged May, taken for petty theft, is sentenced to sin eating. Her tongue is tattooed; her neck is collared. Her name is forgotten. She is neither seen nor touched, except in the context of the sin eating ritual. There, she is essential. Death itself can’t be allowed to take place without her presence.

Campisi evokes a complex, vivid, barely alternate Elizabethan England. At some moments, history is in harmony with the novel; at other points, they depart one another’s company. Illiterate and alone as May is, it’s not entirely clear whether this is genuinely a different world from ours, or whether May’s take on the Reformation, on her queen, and on her society is simply a little warped. She can’t read, and she’s never been out of her tiny town. How much of the world could such a girl legitimately understand?

Yet in her deathbed role, May visits the desperately poor and the rich and powerful. Initially, she follows the lead of the other sin eater, a grotesque woman marked by flesh and misery: “Her eyes are like chestnut moons. She has a nest of honey hair and her skin’s honey, too. She’s handsome, but with a look like something’s been broken and won’t ever be fixed.” They listen to the dying recite their sins, then name the foods that must be prepared for each. The foods are symbolic, complex, and crucial. One cannot be substituted for another.

May’s sensory experiences create new depth. She eats constantly in a world rife with starvation. Her eating is a misery to her, even as her body stabilizes, finally free of the threat of starvation. Like everything in that time and place (or other-place), the foods she eats are deeply unfamiliar to modern eyes. Blood sacrifices demand hippocras in atonement; deception is eaten as whipped syllabub. This is food that speaks in code, barely understood but deeply political.

When the sin eaters are summoned to the palace, the eating they confront includes a venison heart, food that the dying woman’s confession didn’t warrant. The senior sin eater refuses to proceed. May quails in terror: “I know it’s the deer heart. She vowed to eat the sins [the dead woman] recited. The deer heart is a lie. She won’t break her vow. I feel like a squirrel seeing the shadow of a hawk. I dread what’s coming for us.”

What comes for them is court intrigue, filled with violence. The senior sin eater is tortured to death for her refusal, leaving May terrified and alone. She has no idea what the deer heart might represent. Still, in fear for her life, she eats it, triggering a series of murders at court whose motivations are a mystery. May can only shelter and watch, trying to un-knot the web before it kills her, too.

Campisi’s May is a phenomenal protagonist. Her effectiveness lies in her youth. May is a child, just 14. She can’t read or write; she’s the daughter of a tradesman and a grifter. This is no young adult epic. May isn’t here to overthrow her society, wise beyond her years and powerful. She’s a babe in the woods. To her, the conspiracies of the Elizabethan court aren’t historically established; they’re in motion around her. (Devotees of the genre will recognize Robert Dudley, Kat Astley, and Katherine Parr among the barely disguised court figures.)

Hillary Mantel’s Wolf Hall and Bring Up the Bodies brought new vividness and insight to the court of Henry VIII using Thomas Cromwell’s experiences. In Sin Eater, Megan Campisi brings as much or more energy to the court of Elizabeth I. The affairs of that court are legendary, but stripped of the authority of history, they are revealed as impenetrable and deeply frightening.

This vision of Renaissance outsiders is exactly what historical fiction lovers have unknowingly craved. Sin Eater is Campisi’s first novel (she has had plays produced, but none have yet been published), and the only disappointment it offers is the absence of a massive body of work waiting for the reader to devour when this first book ends.