A Simple Act of Violence: A Thriller 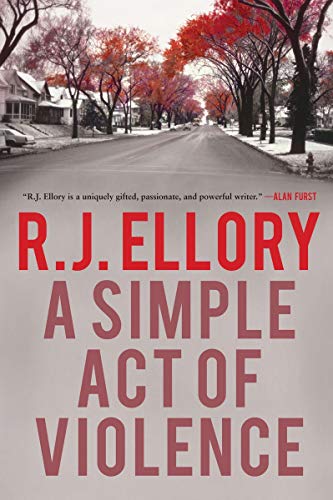 “R. J. Ellory, while possibly besting his 2009 novel, A Quiet Belief in Angels, cleverly weaves in a parallel backstory . . .”

There are four dead women, each provocatively positioned in similar patterns after having been beaten, strangled, and left with a brightly colored ribbon attached to a luggage tag around her neck. The media dubs the killer “The Ribbon Killer.” The quadruple murder scenes all mar the landscape of one upscale Washington, DC, neighborhood, and all signs point toward a serial killer on the loose.

Yet veteran DC cop Detective Robert Miller senses a difference in this latest victim as he enters the home of Catherine Sheridan. The scene appears to be intensely personal; yet the signs are virtually the same as in the first three murders with a few subtle differences. Ultimately, Miller discovers an additional similarity among the four victims: None of them officially exist, not in any of the data bases available to him, legal or otherwise. This complication quickly leads the detective onto a dangerous pathway of geopolitical intrigue best left uncovered if he values his life or the lives of those around him.

R. J. Ellory, while possibly besting his 2009 novel, A Quiet Belief in Angels, cleverly weaves in a parallel backstory to alternate with Detective Miller’s already fuzzy reality. Miller is led into the clutches of John Robey, a mild-mannered professor with entirely too much knowledge of the victims. As the relationship develops, Robert Miller knows the killer is taunting him while leaving no tangible proof. Their conversations, centering on covert activities from Nicaragua to Managua to Miami and beyond, provide the reader a seldom seen view of the inner workings of agencies such as the CIA and FBI as Robey expands his efforts to right a longstanding international wrong by allowing the detective to expose it.

The backstory is ingeniously written as a first-person account of the relationship of the killer to his victims and relates how passions of the persons involved and their actions lead up to the present. The DC murder investigations, written in third person, provide a quick read and plenty of blood and gory scenes to satisfy the taste of the most bloodthirsty thriller fan.

There is something for everyone in A Simple Act of Violence, although the less sophisticated and uninformed readers in the realm of historical politics may tend to get lost in the backstory. That aside, this crime thriller will delight the palate of lovers of political intrigue in international venues, events that ring of historical truth, bringing the action closer to the realm of real life.