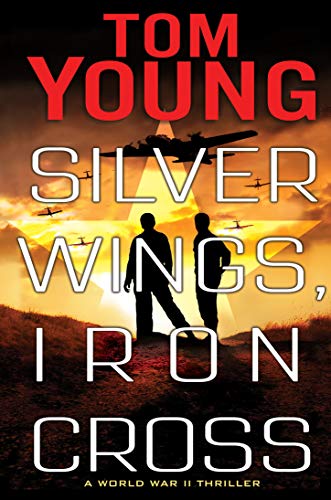 You know you’ve got a great book in your hands when you update your partner on the story at each meal and follow them around the house during the day reading out special passages.

Of course, this only works if you share the same interests.

So for individuals, couples, friends, and/or families who share interest in World War II stories, Silver Wings, Iron Cross is a Grade A historical novel.

For non-WWII enthusiasts, it’s still a Grade A thriller as well as a Grade A character story about the soul-wrenching moral choices and horrors and consequences of war.

It’s even meaningful 75+ years later, in today’s reality of COVID-19, because the last time anything so globally decimating happened (i.e., world war), it took out more than 20 million people and demolished infrastructures as well as economies all the way around the planet. Considering the two phenomena in relation to each other is a sobering exercise in perspective.

That aside, this is a rip-snorting adventure story. Two men on opposite sides of the global hostilities are thrust together by wartime fates and forced to trust and help each other for their mutual survival. One is an American B-17 Flying Fortress bomber pilot; the other is a German U-boat officer. Their jobs—their duties to their countries—are to take out as many of the enemy as possible.

This works fine until they face a common enemy that makes their national interests irrelevant.

One thing that makes this novel compelling is its multiple levels of experience. We learn what mechanized war is like from the sky, from on and under the water, and then the characters from those diametrically opposed worlds face what war is like on the ground.

Individually and together they learn the cruelties, waste, and devastation suffered by everyone overrun by the conflict. These so violently offend the characters’ honor and ethics as human beings and citizens that they must reevaluate and change their approach to life—all while running for their physical lives.

An American pilot down behind enemy lines and a German naval deserter in his own country are both up against death or torture—or both—if captured. Their combined cleverness, desperation, and luck let them escape for a hair-raising while, but ultimately they are caught and land in the same prison camp in Germany.

The story is divided into three parts: (1) how the heroes’ U-boat and plane end up in the same bombing raid in Bremen, Germany, which violently forces them together; (2) how they function as fugitives on the ground, with conflicting loyalties and priorities; and (3) what happens after they finally get captured.

At the same time, the narrative is told through their respective viewpoints in alternating chapters. Until, that is, somewhere around the midpoint, that pattern breaks to reflect their shift from enemies to allies to friends, and their stories merge.

The author, very well versed in military/aviation life in general from his own experience plus deep research into the specific subject of this book, does a terrific job conveying the reality of the time. Readers interested in the techno side of aircraft and submarines will especially enjoy the first section, which realistically conveys the air and water environments.

The second and third sections build on the thriller aspect: good guys on the run from bad guys, with terrifyingly high stakes. The slightest error in action or timing means death or worse.

Meanwhile, both viewpoint characters tell us a lot about the countries they come from, and what it means to them. Their voices tell us, too, about what it’s like to be a hero, a villain, a conspirator, and a helpless victim.

The author shows not just plausibility and mastery of technical details. He also shows writerly skill. The prose flows . . . nary a bumble or burp or an extraneous word as it carries the reader along. Most important, it reveals character through a tricky presentation of viewpoint. From start to finish we understand both men’s motivations and frames of reference. We can understand how they transition from enemies to friends. Our own perspectives are broadened because of them.

At the same time, we get snapshots of what’s going on around them, which give glimpses into what darn near everyone involved in the war suffered. So the context is comprehensive while remaining focused.

If you read only one story about World War II, this is a great one to choose.