The Silver Waterfall: How America Won the War in the Pacific at Midway 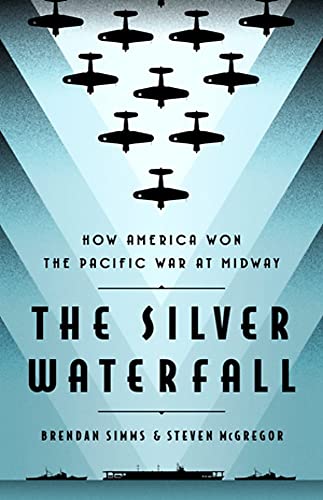 “Brendan Simms and Steven McGregor in their new gripping account of the battle, The Silver Waterfall, show that while luck played a part in the battle’s outcome, victory at Midway mostly resulted from American ingenuity, strategy, and the skill of our fighting men.”

It has been 80 years since the Battle of Midway turned the tide of war in the Pacific during World War II. On June 4, 1942, American naval and air power won a decisive victory over the Imperial Japanese Navy in the central Pacific, ending Japan’s chances of victory in that theater.

The U.S. victory at Midway has been portrayed by some historians as a “miracle,” but Brendan Simms and Steven McGregor in their new gripping account of the battle, The Silver Waterfall, show that while luck played a part in the battle’s outcome, victory at Midway mostly resulted from American ingenuity, strategy, and the skill of our fighting men.

The authors, both of whom teach history at the University of Cambridge, focus on the contributions to victory by three Americans of German descent: Gustave Henry Edward Heinemann, an aviation engineer who designed the Douglas Dauntless dive-bombers that destroyed four Japanese aircraft carriers at Midway; Admiral Chester Nimitz, the commander of the Pacific Fleet who championed naval air power over direct fleet actions; and Norman “Dusty” Kleiss, a dive-bomber pilot who, in the authors’ words, “epitomized American performance on the day of battle.”

After brief biographical chapters on Heinemann, Nimitz, and Kleiss, the authors describe the battle plans of both navies and detail the naval and naval-air forces on both sides as they neared Midway Island. The Americans had broken the Japanese code and knew about Japan’s general plans, but they still needed to locate the Japanese battle fleet. Nimitz and Admiral Raymond Spruance were the key U.S. commanders, while for Japan Admirals Yamamoto and Nagumo—the victors at Pearl Harbor, oversaw Japanese forces.

Japan’s goals were to attack Midway to “draw out the American fleet so that it could be ambushed,” especially the carriers that had been absent at Pearl Harbor. A Japanese victory would immediately endanger Hawaii and possibly the western coast of the United States.

The American plan was to locate and attack the Japanese fleet from the air, using torpedo planes and dive-bombers to cripple Japan’s four carriers—Kaga, Akagi, Soryu, and Hiryu. An American victory at Midway would set the stage for the central Pacific offensive and ultimately bring American air and naval power closer to Japan’s home islands.

Simms and McGregor, using primary source material from the sailors and airmen on both sides, put you in the cockpit of American fighters and bombers and Japanese Zeros, and on the bridges of American and Japanese warships on the day of the battle. The fog of war—what Clausewitz called “friction”—was ever present as strategies and plans unraveled when opposing forces collided, equipment broke down during the stresses of combat, smoke and clouds obfuscated the battle space, and confusion and miscommunication caused errors on both sides.

Japan’s air attack on Midway began at 6:30 a.m. and inflicted considerable damage, but the authors judge it a tactical failure because “Midway was still an operational airbase that could mount attacks on the” Japanese fleet. Japan’s warships were being hunted by U.S. planes even before the attack on Midway commenced.

The air battles were deadly. “[T]he sea around the [Japanese fleet],” the authors write, “was full of Japanese and American pilots who had been shot down in the fighting.” For the American pilots, “rescue by the Japanese was anything but,” as some downed U.S. airmen were killed, tortured, and sent to Japanese prisons, which “often amounted to a death sentence.”

As the battle continued, more than 120 U.S. warplanes sought to find, attack, and destroy Japan’s warships, especially their aircraft carriers. Many were shot down in the attempt. It appeared to many that Japan had gained the upper hand in the fighting. But then one of the Dauntless squadrons sighted the main Japanese fleet. “The ocean was covered with ships,” one pilot recalled. “We were captivated,” Kleiss remembered, “by the sight of the pristine carriers beneath us.”

The Dauntless dive-bombers plunged toward their targets in the face of anti-aircraft fire and fighter-interceptors. One American pilot watching from above the attack described the sunlight reflecting off the Dauntlesses’ wings as a “beautiful silver waterfall.” One by one the Japanese carriers fell victim to the relentless attacks by American dive-bombers. All four carriers were put out of action. Aboard the carriers, Japanese sailors tried unsuccessfully to extinguish the flames and escape the infernos.

The American victory was complete. Japan suffered the loss of four carriers and one cruiser to America’s one carrier and one destroyer. Japan lost 248 aircraft and 3,057 men, while the United States lost 148 aircraft and 362 men. From that point on, Japan’s empire contracted until the end came in August 1945 with the dropping of the two atomic bombs.

Simms and McGregor trace the victory at Midway to Heinemann’s prewar design of the Dauntless dive-bombers. Nimitz wrote Heinemann after the war that the Dauntless planes “saved us at Midway.” Indeed they had. And so, too, did the courage and skill of the American pilots and the wisdom and prudence of America’s naval commanders.

Those American qualities and skills may be called upon sooner rather than later, Simms and McGregor write, as war clouds once again gather over the Pacific. This time the potential enemy is China, which possesses a battle fleet that is changing the balance of power in East Asia.

China’s navy “menaces Taiwan directly,” they write, and its Belt and Road Initiative seeks to make China the predominant power in the Indo-Pacific and throughout Eurasia. “Over the past few years,” the authors warn, “the United States and the rest of the Western world . . . have been slowly waking up to all of this.” If we don’t take steps to adequately build up our naval power in the region, they explain, “then we may suffer another Pearl Harbor—but there is no guarantee that we have done the necessary preparation to earn another Midway.”

The lesson of Midway that applies to today’s danger in the Pacific is that “military preparedness in times of relative peace” can mean the difference between victory and defeat.