The Silver Age of DC Comics 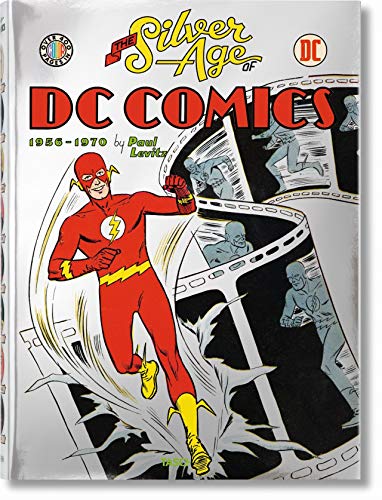 “. . . a consideration of the medium and its place in popular culture.”

Granted, a book called The Silver Age of DC Comics, 1956–1970 may on the surface seem to have a limited potential readership, but anyone who is capable of reciting all or any part of Green Lantern’s oath (In brightest day, in blackest night/No evil shall escape my sight/Let those who worship evil's might/Beware my power, Green Lantern's light!) would very likely find themselves taking a huge regressive step back toward all that was best and most entertaining in their childhood by opening the covers of this book.

The Silver Age is an example of the coffee table book done right.

From the book’s cover image (evoking as it does the cover of 1956 edition of Showcase #4, with the publication of which the Silver Age began—all comic books published between 1956 and the bitter dregs in 1970 are part of the Silver Age of comics, during which comic books, especially super hero comic books, were redefined and redeveloped for a more modern sensibility and a more sophisticated readership.

The Silver Age is so named to separate the era from the Golden Age that took place beforehand and the Bronze, Modern, and Dark Ages that followed.), of the then-brand-new Flash, who moves so swiftly that he bursts forth from an individual panel of a moving film strip, onward, The Silver Age not only explains the epoch of the Silver Age, but evokes it as well.

It was a simpler time, at least at the beginning, a time, as most presidential candidates suggest it always is, when it is “morning in America.” When the best bits still lay ahead, a time when new super heroes popped up every month.

In colorful, identifying costumes and with self-descriptive names (“Hawkman,” “Batman,” “Manhunter from Mars”) they battled evil with no need for badges, licenses, or malpractice insurance.

A halcyon time. When a four-color comic could be bought for a dime. And later, for twelve cents. And then 15 by the end of the Silver Age.

In the hands of author Paul Levitz (himself a comic’s professional, first as one of the creators of the comic’s phenomenon known as a “fanzine” and later as a writer for DC Comics’ Legion of Super Heroes and, finally, as the company’s President and Publisher) the book is vastly more than a dip into the nostalgia that millions share for the stacks of comic books that once littered the floor of their bedroom closets, or the attics or cellars before their mother gave them away, for the musty smells of the things, for the way that Silly Putty allowed you to lift an image from the printed page decades before the scanner.

The Silver Age of DC Comics is a consideration of the medium and its place in popular culture.

“Freeze time: It was the early ’60s: the Silver Age at its peak at DC. Consistency was primary for the company, with an editorial staff of veterans and creative talent that stuck with assignments for years, together carefully developing themes, characters, and formulas. Invisible but strong walls surrounded each team: although the writers and artists were freelancers working on a page-rate basis (and not being paid at all if there was no immediate assignment to be done) . . .”

To enter the world of The Silver Age is to visit a time and place in which girl reporter Lois Lane was eaten alive by the suspicion that Clark Kent and Superman were one and the same, and clung to her pillbox hat years after Jackie Kennedy tossed hers. A world in which the Superman’s girlfriend, Lois Lane comic book outsold Batman, until the surprise success of his twice-weekly television show.

A time in which The Flash was best known for his “Rogue’s Gallery” of villains, including “The Reverse Flash,” “The Mirror Master” and “The Weather Wizard,” who had a technologically advanced “magic wand” that allowed him to control weather patterns with his mind.

An era of change and rancor, of assassinations (In one famous issue, Superman trusted John F. Kennedy with his secret identity, reasoning that “If you can’t trust the President, who can you trust?” Sadly, the issue shipped and had just hit stands in November, 1963.), and of sweeping societal change, all of which was reflected in the comics, perhaps most notably in the pages of Wonder Woman. In the late sixties, the Amazon Princess abandoned Paradise Island for a new color-blocked wardrobe and go-go boots and teamed with a martial arts expert named “I Ching,” and Gloria Steinem too notice:

“By 1968, she had given up her magic lasso, her bracelets, her invisible plane, and all her superhuman Amazonian powers. She had become Diana Prince, a mere mortal who walked about in boutique clothes . . . She was a female James Bond—but far more boring since she was denied his sexual freedom. She had become a simpleminded ‘good girl.’”

Given that the character had been developed back in the Golden Age by a psychologist named William Moulton Marston who included more than a slight nod to the joys of masochism and bondage, Ms. Steinem perhaps had a point.

But then again, by 1968, the times were changing. Batman had morphed from a man whose grief drove him into vigilantism into a pointed-eared buffoon. And the young mascots of the various super heroes (Robin, Wonder Girl, Beast Boy, Kid Flash, etc.) rode the youth quake and banded together to form The Teen Titans.

One sidekick, The Green Arrow’s young assistant Speedy, developed a drug habit and Green Arrow and Green Lantern teamed together to combat not only super villains, but also corporate bosses, societal injustice and racial prejudice in a book that captured the zeitgeist of the day, under the guiding hand of artist/creator Neal Adams, who finally brought the revolution to comics that been underway throughout the whole culture for some time before.

Mr. Adams supplies the introduction to the volume and, in it, comments:

“I was so much younger than everyone on Earth. I heard about guys like Joe Kubert who started at a very young age, but by the time I came in, all those guys had become adults. I started drawing comics and doing art when I was 18, basically when I got out of high school.”

From here, he describes the generation gap that, for years, locked him out of the industry and relegated him to its lowest rung, Archie Comics. And his eventual work at DC that revolutionized the industry, much as Jim Steranko’s did over at Marvel Comics.

Of all the riches that The Silver Age has to offer—oversized format, glorious full-color plates of both covers and interior pages, anecdote after anecdote about the industry’s inner workings—perhaps the best aspect is the tribute it pays to the creators, who like Mr. Adams, and Joe Kubert, and Jack Kirby and Carmine Infantino and John Forte and Curt Swan, dedicated their time and talents to an industry that brought few rewards and no published creator’s credit for a very simple reason, one identified by Mr. Adams:

“So I was doing comics, some advertising, taking care of my family. Then something happened. I don’t know when it happened, how it happened. I just fell in love with comic books. I didn’t expect to . . . I had no desire to love this stuff. I did as a kid, but I had a career I had to be responsible for. I had to support a family and enjoy the whole career, and I just fell in love with comic books. And I like it more today than ever.”

That love translated onto the pages of the comics. Today it is evident on every page of The Silver Age. The book—the first of four volumes—resonates with a deep affection and respect for the comic book as art form and cultural relic. And best, author Levitz even manages to define why the readers loved them so much as well:

“Perhaps the essential joy of the Silver Age for its readers was coming to the newsstand confident in finding your familiar friends—the characters, each with their consistent lives, values, and ever-growing supporting casts, depicted with care by the anonymous creators the same way, month after month. There were surprises in the stories (what strange shape will Jimmy Olsen be transformed into? Who will woo Lois Lane? Which villain can depower the entire Justice League?), but they were wonderfully familiar surprises, variations on themes the readers adored.”

For those of us who visited the newsstands and plucked the books off the spinning wire racks at the front of the store, the adoration remains. And The Silver Age of DC Comics does an extremely good job of explaining why.