The Silence of the White City (White City Trilogy) 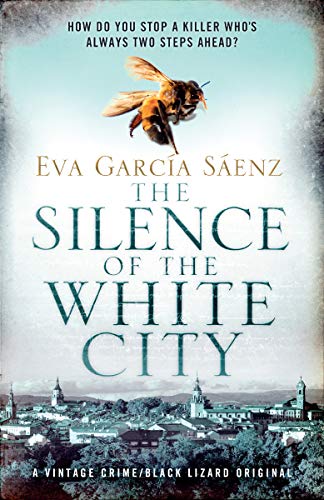 “There’s a buzz around Eva García Sáenz and her trilogy, and The Silence of the White City is a crime novel you’ll want to put at the top of your summer reading list.”

Celebrity archaeologist Tasio Ortiz de Zárate has been in prison for 20 years, serving a sentence for a series of ritualistic murders that terrorized the citizens of Vitoria, a Basque community in northern Spain, two decades ago. Just as his release is approaching, the murders suddenly resume.

As the city once again falls under the fearful spell of a killer who murders unrelated individuals in pairs, Inspector Unai López de Ayala, known to his friends as “Kraken,” is faced with three possible theories to explain the new series of terrifying homicides.

Theory A would suggest that Tasio is now acting as a puppet master from his prison cell, directing a copycat follower. According to theory B, Tasio was never the murderer, and after an inexplicable delay of two decades the actual killer has resumed his grim work. In a third possibility, the killer has always been Tasio’s twin brother, Ignacio, the detective responsible for Tasio’s arrest and conviction 20 years ago.

As the murders continue, the pressure mounts on Kraken to find the killer before he himself becomes one of the next victims.

The Silence of the White City is a bestselling police procedural by Eva García Sáenz that was originally published in 2016 as El silencio de la ciudad blanca in Spain. It’s the first novel in the Trilogy of the White City, the other two installments of which will also soon be forthcoming from Vintage Crime.

Born in Vitoria, the author has lived in Alicante, a port city on Spain’s southeastern coast, since she was 15, but given the depth and breadth of local color present in The Silence, her imagination is obviously firmly rooted in her hometown.

Interestingly, her first novel, La saga de los longevos (The Immortal Collection) was written in the evenings while she worked at her day job as an optometrist, and she self-published it in 2012 through Amazon’s Spanish website. A historical saga, it sold extremely well and was followed by two other novels before she embarked on her Trilogy of the White City.

There are obvious allusions in this novel to The Silence of The Lambs, including an imprisoned serial killer (viz. Hannibal Lector) and the insertion of insects into the mouths of victims, in this case live bees that sting the victims to death.

Even stronger are the similarities in look and feel to the Nordic noir tradition. Kraken is as brooding, flawed, and self-questioning as any given Scandinavian detective (Joona Linna or Kurt Wallender, for example), and while the setting is thankfully not cold and barren, the city and its immediate surroundings play a comparable role in determining atmosphere and mood in the story.

Certain aspects of the narrative related to police procedures are a little puzzling, though. Detectives seem to rely only on missing person reports to identify victims, for example, and the collection of fingerprints is either not performed or not mentioned until late in the novel. While we’re told Kraken’s partner/best friend, Estí, is a specialist in victimology, the victims themselves as individuals quickly recede into irrelevance as the investigation unfolds.

Additionally, the relationship between Kraken and Estí swings between extremes of trust and distrust, affection and alienation, a little too abruptly and too frequently as the author strives to generate emotion and drama. It’s almost as though she’s trying to figure them out at the same time that we are.

Not to mention Kraken’s blossoming romance with his boss, which comes across as rather contrived.

Make no mistake, though. While The Silence of the White City is a little rough around the edges and somewhat derivative in parts, there’s excellent writing here that you won’t want to miss.

Kraken’s point of view is engaging, and the first-person narrative includes a number of solid nuggets. For example, Kraken remarks at the beginning of the novel, “I trusted Estíbaliz’s judgment the way the back wheel of a bicycle trusts the front one.” Later, it’s the first Tuesday in August and he tells us, “It was a scorching day from first light. There was no trace of a breeze. It was as if the city were inside a glass bottle that had been left out in the sun.”

The author’s use of local coloring, though, is perhaps the most interesting element of all. As one of the characters notes, the perpetrator “stages these crimes at different places that are important to our regional history.” At the same time, they’ve been coordinated around a series of ongoing religious events and festivals that bring the culture and traditions of the region to life for readers.

For those who like an international flavor to their crime fiction, this one’s got it all.

There’s a buzz around Eva García Sáenz and her trilogy right now, and The Silence of the White City is a crime novel you’ll want to put at the top of your summer reading list.