This Side of Night 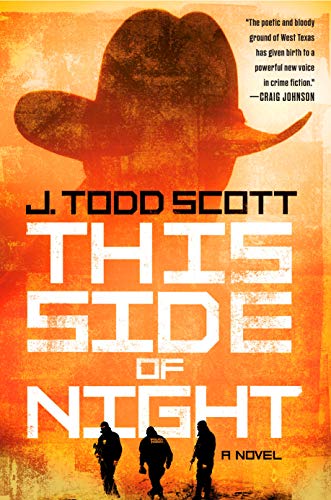 “The first must-read of the summer has arrived.”

The opening pages of This Side of Night begin violently in Ojinaga, Mexico, with two busloads of normalistas—student protestors—being stopped at what appears to be a police road block, and within seconds being fired upon by police or drug cartel members, some masked, others not. When the shooting stops, three students lay dead, others critically wounded, and at least 19 are missing, believed kidnapped by the attackers. Blame is quickly placed at the door of the Nemesio cartel. But this is Mexico, and nothing is quite what it seems. Initially . . .

Nemesio’s aging leader, Fox Uno, knows he never gave the order for this bloody slaughter and suspects it has come from a rival cartel. Another thought of who is responsible enters his head, but he hopes the thought is based more on paranoia than reality: someone within his own organization, someone close to him.

Elsewhere, others are holding investigations into the slaughter, also, desperately trying to glean information on who is responsible. The Mexican police, American authorities—the usual suspects. However, despite all their modern-day technology, one other interested party will outsmart them with his expertise of medieval torture, the man known as Juan Abrego.

“No one knew who had ordered the attack, but Juan Abrego suspected who was supposed to answer for it. No one knew . . . except maybe for this man, this bus driver tied to the chair. There had been two buses and two drivers and somehow this one had walked away unhurt, smart enough to abandon his bus moments before the shooting.”

It’s not too long before Juan Abrego gets to the point, in his own chilling fashion of straightforwardness, as he begins to talk to the suspect:

Across the Rio Grande, Sheriff Chris Cherry and his deputies America Reynosa and Danny Ford find themselves caught in Fox Uno’s escalating war with the recent discovery of five dead men at the river’s edge. But when El Paso DEA agent Joe Garrison’s own Nemesio investigation leads him into the heart of the Big Bend, he’s not ready to accept the cartel leader’s retreat or defeat.

Not only does Garrison suspect a high-profile drug task force in a neighboring county is corrupt, he can’t shake lingering doubts about the loyalty and motives of the young deputy, America Reynosa. And he won’t let Sheriff Cherry ignore them either.

The fact that Fox Uno crossed over the border to see America “Amé” Reynosa, only adds fuel to the fire of mistrust. To complicate matters even more, she is Fox Uno’s niece.

This Side of Night, despite being fiction, is based on true happenings in 2014. It’s author, J. Todd. Scott, is a federal agent with the DEA, with more than 20 years’ service under his belt. With these credentials, he gives the story an authentic immediacy and original voice that captures us from the very first page. Despite the violence throughout the novel, it is not gratuitous, and carries with it the dark and violent poetry of Cormac McCarthy. The first must-read of the summer has arrived.