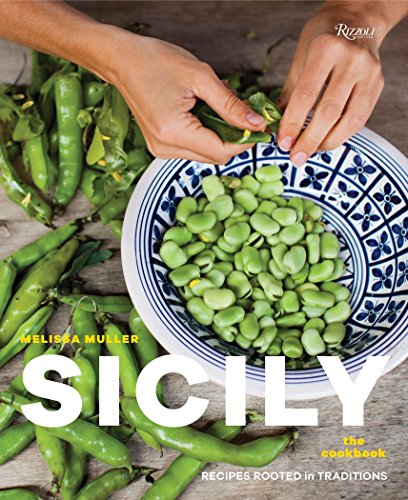 A great dilemma faced by any cookbook author when writing about a foreign cuisine is how deeply to connect the recipes with the gastronomy of the place written about. Not everyone understands that cooking is rooted in culture, a culture that breathes life into the cooking as surely as it breathes it into the language and art of a place. It’s more than just a recipe.

But the great majority of cookbook buyers so often only want a recipe and either don’t care or don’t believe it’s important to understand the culture. Melissa Muller does an admirable job of straddling this dilemma in her fine book on Sicilian cuisine.

Muller is a good writer and conveys her fascination with the homeland of her grandmother. For those steeped in the history of Sicily it’s unlikely you will learn anything new. First, because the level of history presented is introductory, but second because—and this is a danger faced by many writers—so much of the history is folkloric and folklore makes notoriously bad history, especially when it’s folklore from the family.

The best way to present this is ethnographically. Muller is somewhat aware of this as she explains that “this book contains a wide range of recipes but does not encompass the entirety of Sicilian cuisine.” It should be noted—and Muller does refer to this—that some recipes are modern chef inventions, and that does not distract from the “traditional” nature of the Sicilian cuisine being presented. One may find the chef inventions less interesting than the traditional food.

Muller is also aware that her grandmother’s inspiration ends in the kitchen: “she knew not of the Muslim inhabitants who lived side by side with the Greek Byzantines and the Jewish Sicilians.” After a short introduction, personal in many ways, Muller dives into an introduction to Sicilian cuisine.

Muller provides in all cases not only the English names of foods and dishes but the Italian and the Sicilian as well—this is admirable. She begins with a chapter on “foundational elements” which includes the ingredients used in Sicilian cooking as well as basic mixtures such as the importance of breadcrumbs, pistachio pesto, and agrodolce (sweet-and-sour). Muller even has included one page on manna (as in “manna from heaven”), the sap of the ash tree, which although not used much in Sicilian cooking is nevertheless an indication of Muller’s sensitivity to Sicilian culture.

Chapter 2 is on preserved foods such as caponata, homemade ricotta, and preserved artichokes. Chapter 3 is a wonderful introduction to Sicilian breads which could be a book on its own (in fact, there is one published in Italian).

Muller has recipes for some classic Sicilian pasta dishes that everyone will love, such as pasta con le sarde (pasta with sardines) and pasta cu i vroccculi arriminati (pasta with “shaken” cauliflower—Muller incorrectly translates arriminati as “stirred” when it should be “shaken”). One applauds Muller for concocting a recipe for timballo del Gattopardo, a timbale that only exists as a description in Giuseppe Tommaso di Lampedusa’s novel The Leopard. I’ve written my own recipe based on that very same description and it is great fun indeed.

Sicilian cuisine is complex, multifaceted, deep, and rich in history, and choosing the recipes for her book must have been agonizing. If you’re familiar with Sicilian cuisine you’ll notice recipes that are missing and then notice ones you’re so happy are there—a result of Muller’s predilection and research: They are all well-chosen. The vegetables, seafood, and meat chapters are all delectable both with classic Sicilian preparations such as stuffed vegetables, simply grilled or deep-fried fish, and beef braciola (roll-ups) such as sasizzeddi.

The lightest chapter of the book is the one on sweets. There is a real reason for this and that is because many Sicilian sweets are not suitably made in the home and are the province of pastry shops. Of course, almond cookies among tens of others, cannoli, and watermelon pudding can be made at home and those recipes are here.

The photographs in the book are beautiful and inviting and the food presented as delectably as possible. Food photography can be very misleading for a cook who is often disappointed that cooked dishes don’t look like those in the book. With that proviso, anybody purchasing Muller’s book will be quite happy with both reading it and cooking from it.

The one thing the book lacks is a bibliography or “suggested readings.” Sicily and Sicilian cuisine has an enormous treasure trove of libraries to be explored and I wish Muller had pointed us to those further readings.