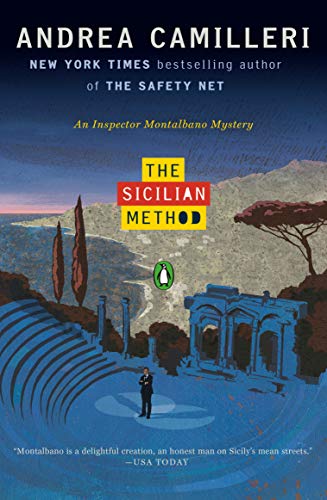 “For Salvo Montalbano, the whole episode is as dramatic as a film. But it will get much more unreal when he tracks down a victim at last, the outrageous director Carmelo Catalanotti.”

Although Andrea Camilleri died in 2019 at age 93, his biting yet entertaining police procedurals are still making their way, via translation, to America. The Sicilian Method is a clever title, suggesting at first a crime methodology, but better understood as a phrase from acting. Scattered across bedrooms and stages of the imagined town of Vigàta, Sicily, the crimes that Inspector Montalbano investigates here are also very clever, clearly the product of a twisted mind involved with stagecraft and performance.

Count on Camilleri for frequent bursts of satire, like twists of lemon juice, as the story spins forward: Mimi Augello, also a police detective, wakes Inspector Salvo Montalbano in the middle of the night, panicking and desperate. Montalbano’s annoyed enough to make things tough on his colleague, until he sees Mimi’s face and realizes something serious must have happened. Mimi begins to dump the tale of woe:

“‘I wanted to tell you . . .’ he began, but stopped, only then noticing that the inspector was naked.

And Montalbano, too, realized only then, and so he dashed into his bedroom and grabbed a pair of jeans.

As he was putting them on, he wondered whether it might be best to put on an undershirt as well, but decided that Mimi wasn’t worth it.”

It turns out that Mimi, escaping down some balconies from a lover’s tryst interrupted by a returning husband, has stumbled across a murder—and, unthinkingly, left evidence of his own visit there. For Salvo Montalbano, the whole episode is as dramatic as a film. But it will get much more unreal when he tracks down a victim at last, the outrageous director Carmelo Catalanotti.

Catalanotti’s particularly outrageous aspect is what he pushes his performers through: He pries into their psychological wounds, then forces them back into situations that injure and humiliate them in the same way. His excuse: He’s the director, and he’s making powerful actors out of this. But of course, what he’s really making is maddened and bitter enemies, and before long, Inspector Montalbano has a wide set of possible suspects, some ridiculous means and opportunities, and a personal conflict of interest in a budding romance with the new head of forensics.

Anyone who’s subjected themselves to drama school at any level—or even to ordinary high school—will grasp the real level of malice and damage produced by the far-too-clever director. So it’s a relief to tag along with the mundane and sometimes stumbling efforts of police procedure, as Montalbano marvels at his discoveries and tries to find the right combination of person and scene to explain both the original murder and a second one.

Stephen Sartarelli’s translation allows Camilleri’s deft humor to come through vividly; his attempts to portray lower classes by giving them Cockney-style slang are less successful but tolerable for the sake of enjoying this lively crime novel.

There’s no need to read the other 25 Inspector Montalbano books before The Sicilian Method, but this enjoyable romp may send readers scurrying for them afterward, giving birth to a new generation of collectors of Camilleri’s dark humor and neatly twisted plots, along with the persistence of an inspector who can’t ever let himself be defeated by crime.