To Show and to Tell: The Craft of Literary Nonfiction 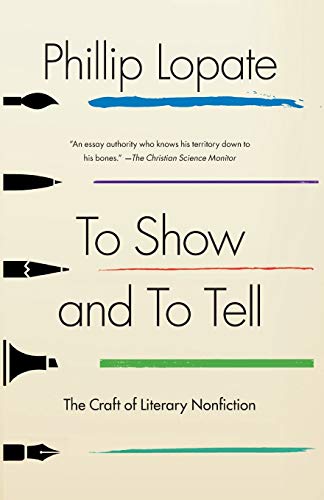 “To Show and to Tell: The Craft of Literary Nonfiction provides clues as to how one might aspire to write the way Mr. Lopate does.”

“Portrait Inside My Head is a worthwhile, sometimes funny, always personal journey through a life well told.”

Contrary to common belief—contrary to most teaching, too—using first person is especially legitimate for essays and the like, according to master-of-the-genre Phillip Lopate. After all, what else is an essay or a column but—well-reasoned and written, one hopes—personal opinion?

It’s the same with reviews: whether anyone thinks a performance of any kind—book, movie, or play—is good or bad, well executed or not, is entirely subjective. Reviewers, like essayists, must surely take ownership of their opinion, because ultimately that is exactly what it is.

“The problem with ‘I’ is not that it is in bad taste (as college composition courses used to teach),” explains Mr. Lopate, in To Show and To Tell: The Craft of Literary Nonfiction, “but that fledgling autobiographical writers may think they’ve said or conveyed more than they actually have with that one syllable.”

He, of course, does not. As a personal essayist, his touch—liberally scattered with the contentious “I”—is light, sure and attention holding, unsurprising given his 40 years of teaching the subject.

For as Publishers Weekly so rightly (if a little pompously) says: “Lopate is both legatee and guardian of the genre.”

Releasing his “nuts and bolts” guide to crafting nonfiction as well as a volume of his own essays, Portrait Inside My Head on the same day is a very clever touch.

Devotees of the style can pore over both and marvel at Mr. Lopate’s skill as a teacher and a practitioner.

For while I wouldn’t presume to put myself in the same rarified professional space as Mr. Lopate, the flashes of recognition I have as a columnist are so frequent throughout his insightful master class it sometimes feels as though he’s inside my head. Not only that, he confirms my own—instinctive, rather than learned—creation of myself as character within my own work. The device is not a choice, he believes, but a necessity.

As for the portrait inside his own head, Mr. Lopate’s collection of personal essays embraces topics as diverse—and as united—as childhood, marriage, parenthood and popular culture.

A somewhat disadvantaged upbringing as a Jewish kid in a largely black area of Brooklyn translates into rough-and-tumble tales of fights, fraternity and sibling rivalry. All grown up, he and his brother Leonard—a successful New York radio personality—continue their love-hate relationship, providing more grist for the (true) storyteller’s mill.

Portrait Inside My Head is a worthwhile, sometimes funny, always personal journey through a life well told. And To Show and to Tell: The Craft of Literary Nonfiction provides clues as to how one might aspire to write the way Mr. Lopate does.