Should the Tent Be Burning Like That?: A Professional Amateur’s Guide to the Outdoors 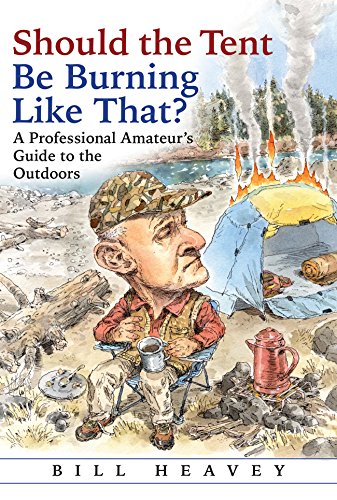 “Heavey is a master of the comedic non sequitur and has a fine-tuned sense of the overall absurdities of the human condition.”

“The important things to know about this book is that it is crammed with the kind of practical advice* that you will never use and that it contains about 60 short works (most from Field and Stream, but also from the Washington Post and some magazines) that can be read in any order. The pieces have been known to make people laugh, cry, or curse, often in their bathrooms, since that is where many people prefer to read my stuff.”

In this first paragraph of Should the Tent Be Burning Like That?: A Professional Amateur’s Guide to the Outdoors, Bill Heavey, an editor-at-large and longtime columnist for Field and Stream and considered to be one of America’s best sportsmen writers gets right to the guts of his unique approach as an outdoor life raconteur.

Instead of the traditional hook-and-bullet trophy tales, predicated on fine-honed hunting prowess, expensive equipment and skill at reading nature’s signs and omens, Heavey shares personal failures and only a few triumphs in the sporting life of a suburban dad who happens to be an avid hunter and fisherman, hooked by his addiction while the prey often gets away!

Despite his numerous failures, even in places that teem with fish and game, Heavey never loses his boundless enthusiasm for the chase and the call of the wild. Guides, hunting/fishing buddies and his readers may feel sorry for him, but “my writing makes people whom the world often judges as failures feel better about themselves. I think there is a certain nobility in that.” Heavey is an obsessed but empathetic everyman not a sportsman superman.

The asterisk in the opening paragraph takes readers to a footnote which reflects on the surprising utility of some of Heavey’s hard-won experiences.

“On second thought, there are occasions when the knowledge in these pages could prove invaluable. This book will show you why it is sometimes necessary to shoot an hunting arrow into your motel room’s phone book. Why you’ll never be a good hunter if you aim your shotgun . . . You will learn why putting a boy on his first bluegill is as high an honor as a man can aspire to in life…Why William Faulkner’s ‘The Bear’ may be the best thing ever written about hunting. Why, when your heart has been crushed in love or by the death of a friend, the proper response is to go fishing…Why, when it comes to exacting revenge, the mafia have nothing on your teenage daughter. Why, if you are riding a horse for five hours up into the mountains on a weeklong trout expedition, pantyhose is essential.”

And this is just on page one. Over the course of the book, Heavey takes us along on his travels throughout the U.S. and Canada chasing all kinds of game whether steelhead in California, caribou in Quebec, turkeys in Arkansas, trout in the Potomac, or mule deer in Montana.

The columns selected for inclusion in this fourth compendium of Heavey’s writings range from campfire comedy and the camaraderie of the cabin and trail, to appreciation of the sheer beauty of a leaping copper redfish as well as reflections on the sheer joy of just being in nature as a release from the ruts of everyday modern life.

Along the way, there are some beautifully written characterizations of the odd ducks who make a living from guiding as well as some perceptive essays on the true aficionado’s quest for the holy grail of perfect gear expressed in an obsession with sporting goods stores and “catalogue fishing.”

Most telling are the pieces written from the heart. Unlike many writers in this macho genre, Heavey is not afraid to display his emotions, revealing his love for a dying friend, his struggles to communicate with his beloved daughter, the understated history of failed personal relationships and his own dealings with the aging process—the very human struggles which beset us all.

Above all, Heavey writes respectfully about his role in the food chain and the ethics of hunting. The most honest piece of writing included here might be “Faced with an Ant”. Hunters in America are not exactly popular in some circles.

“At a cookout last year, a woman who’d heard that I was a hunter sought me out to inform me that hunting was a cruel sport in which slobs like me made themselves feel manly by killing innocent animals.”

Suppressing the urge to tell the woman that she was full of it, Heavey admitted to being conflicted about the killing part, especially the older he gets.

“It’s hard to explain. It’s the hunt that’s thrilling, that whole process—the waiting and expectation, the focus and heightened sense of awareness, how the woods seem suddenly so vivid and alive. I’ve had great hunts where I didn’t kill a thing. But in order for that process to be real. You have to be willing to make the kill.

“The thing about killing is that it makes you recognize the reality of your own death, which is an inevitable as any animal’s. And as inconsequential. In the grand scheme of things, I mean. It also brings home the fact that all life—from frog to man, robin to alligator, sustains itself at the cost of other life. And that there aren’t any easy answers to what’s right and what’s wrong.”

You don’t have to be an outdoor sporting enthusiast to enjoy this book. The short essays always entertain via the self-deprecating gentle humor and well-crafted comedy. Heavey is a master of the comedic non sequitur and has a fine-tuned sense of the overall absurdities of the human condition. Plus his delight in just being outside is infectious, making even confirmed couch potatoes want to hit the trail.

The book might indeed be found more often in bathrooms and on bedside tables rather than in a beach tote or plane carryon bag for sustained reading. A handful of mini chapters at a time are enough, particularly as they seem to be assembled randomly in four sections, without any apparent chronological order or thematic connection. Plus the quality is somewhat uneven, with several of the included columns are noticeably weaker than others.

Also, the writing in this genre is of necessity preoccupied with the mundane, rarely reaching the level of existential reflection on travel and nature of Paul Theroux or even Bill Bryson. A Wall Street Journal reviewer wrote “Think Erma Bombeck in camo gear.”

Nonetheless, Should the Tent Be Burning Like That: A Professional Amateur’s Guide to the Outdoors is a most welcome antidote to the pressure cooker pace of modern life, particularly in an era where nature is under siege by the interests of short-term economic gain, and it is increasingly difficult to see the true trees for the fake forests.