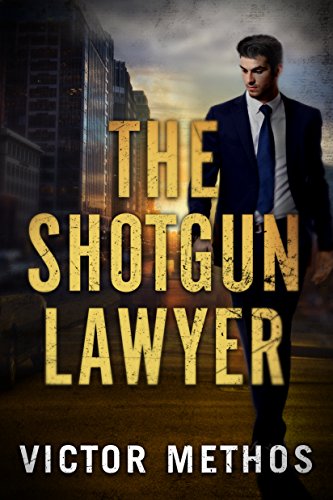 What would you have if John Grisham wrote Better Call Saul? Answer: You'd have The Shotgun Lawyer by Victor Methos.

Personal injury lawyer Peter Game (real name James, but Game works better for billboards, bus stop benches and TV ads) normally handles small fee, quick and easy divorces, DUIs, hit and runs, slip and falls, anything he can get. He's called a shotgun lawyer because, like the spread of buckshot, he takes everything that comes his way. The big firms get 90 percent of the cases out there, and he has bills to pay.

"The small guys, like me, had to fight for the remaining 10 percent of cases. Usually the crap ones that the big lawyers didn't want. The big boys didn't want to fight in court; in fact most of their senior partners, who had been doing this twenty or thirty years, had never done a single trial. They wanted the cases they could flip as quickly as possible for the paycheck. It worked out well because if there was even a hint of a fight, they passed on the case and left it for us scrappers to duke it out over. . ."

And if Peter has to resort to shenanigans to get by once in a while, so be it.

If he's in a hurry, he pretends he called in a takeout order that they screwed up and didn't make so they put a rush on his food. The appearance of affluence is important in his business, so he bribes the receptionist in an upscale law firm to let him use an empty conference room to consult with clients. Afterward, he walks them out to the parking lot and stands next to a silver Porsche until they drive off. Then he gets in his own car, an old Honda with a cracked windshield.

Home for Peter is a two-bedroom second floor walkup, the only place he can afford. He shares it with his troubled teenage son, plodding along day by day waiting for a big case whose fee will allow him to improve life for both of them.

And one day, that case comes along.

Despite that, even the remote possibility of a big money settlement is too much for Peter to ignore. He reluctantly takes the case anyway. After a contentious first meeting with the gun company's intimidating inhouse counsel, Roger Bailey, some of Peter's reluctance is replaced by a desire to retaliate if even in a small way.

"I got up early the next day, went straight to Tanguich Rifles, and drove slowly by the executive parking. Roger's space was near the front. I parked in it. . . . A few minutes later someone honked behind me. I saw a silver Mercedes off to the side with Roger in the driver's seat. I got out and stormed over. He rolled down his window . . . I grabbed his windshield wiper and ripped it off."

What else would you expect from someone who breaks up with his fiancé in a text?

What follows is a succession of dirty tricks and cat and mouse maneuvers. The gun company lawyers continue to be a huge step ahead of Peter placing one insurmountable barrier after another in front of him. (Even Peter's son has an unexpected surprise for him.)

Nevertheless, the case goes to trial.

Even hard core fans of legal thrillers have to admit that courtroom scenes can sometimes be long, drawn out, incomprehensible, and downright boring. Not so this one. Author Methos makes quick work of it, ending with the only possible outcome of a case like this. Along the way, he makes a valid presentation of both sides of the legal argument though a bit of political bias does tend to surface.

This is a fast-moving story filled with plenty of conflict for Peter and his legal team. Readers will be reminded throughout of the compelling writing style of John Grisham.

Here's hoping for more of Peter Game from this creative and entertaining author.