A Short History of Islamic Thought 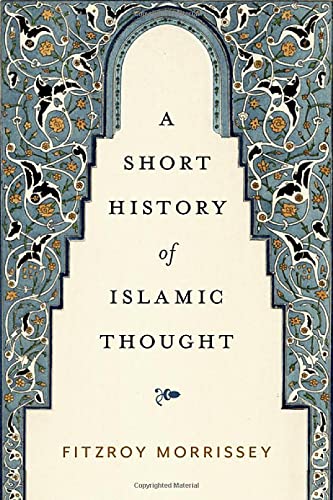 “concise, clear, easy-to-follow guide through Islam as both a religion and a political-cultural force. . . . impressively thorough.”

Fitzroy Morrissey’s book fills a major void in general knowledge by offering a concise, clear, easy-to-follow guide through Islam as both a religion and a political-cultural force. A Short History of Islamic Thought delivers exactly what it promises. It is indeed brief, roughly only 200 pages, yet manages to be impressively thorough, packing a big punch for its small size.

One reason the writing works so well is that Morrissey consistently places Islam alongside Christianity and Judaism, religions which will probably be more familiar to readers. By showing the similarities and differences as each religion develops, Islam makes sense as reaction to and evolution from earlier monotheistic religions:

“The Qur’an describes itself, too, as a confirmation of the previous scriptures—of the Torah (al-Tawrah) of Moses, the Psalms (al-Zabur) of David, and the Gospel (al-Injil) of Jesus. All come from Allah: ‘Nothing that is said to you that has not been said to other messengers before you’ (41:43). Yet there was also something different about Muhammad’s revelation. While most earlier prophets had been sent to the Israelites, the Qur’an had been revealed to Muhammad ‘in a clear Arabic tongue’. . . . His mission was to the Arabs, a people who, though they may have been visited by a prophet or two in earlier times, had never received a written scripture.”

The book also effectively argues for the importance of raising understanding of the Muslim world, not least because:

“Adherents of Islam number some 1.8 billion people—about a quarter of the world’s population—and can be found everywhere from Los Angeles to Jakarta. Whatever our own beliefs, engaging with our fellow human beings in a thoughtful way requires us to know something about the ideas that make them tick.”

From the historical origins of Islam with Muhammad to the Sunni-Shia split to an impressive range of Islamic thinkers who impacted the practice and interpretation of the religion, each chapter offers insight into a specific period in Islamic history. Readers are introduced to the major thinkers in the religion, including familiar names like Averroes and Rumi as well as a host of equally important, if lesser-known figures, including Mahammad bin Abd al Wahhab, the founder of Wahhabism, and a series of Sufi philosophers.

Morrissey carefully charts the changing attitudes toward Judaism and Christianity along the way and provides historical background for the major Islamic empires, from the Umayyads to the Ottoman to the Mughal. The revival, translation, and dissemination of ancient Greek texts is featured as well, having an important impact on European Christian thought as well as on Islam. The philosophical links Islam has to these works is intriguing. Just as important is how their use saved these texts from oblivion, many surviving as Arabic translations that were then translated into Latin.

The book ends by carrying Islam into the modern age, showing the questions and problems it faces. It’s an impressive feat to capture so much in so few pages. The last sentence conveys well the impact of this small but mighty book:

“It is clear that the history of Islamic thought matters, and that it matters to us all.”