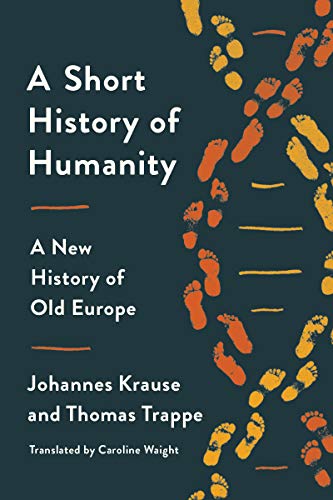 It’s nice to know where we come from. Some folks are still taking it hard that we descended from apes, but there are new discoveries all the time. In fact, thanks to breakthroughs in DNA research and the burgeoning new field of archaeogenetics, we’re learning so much about our early history that it’s hard to keep up.

That’s the thrust of A Short History of Humanity by Johannes Krause and Thomas Trappe. Krause does the archaeogenetics from the Max Planck Institute, and Trappe, a German journalist, the health science.

It’s fairly easy to see where the two writers staked out their territory. The first two thirds of the book is about what we’ve learned from the DNA in ancient bones (Krause), and the third section, mostly, about the plagues that never stop descending on benighted humanity (Trappe).

First, the DNA. Krause is on the frontlines of this research, and he begins by describing the wealth of information from a tiny fingerbone originally attached to a Russian five- to seven-year-old who lived 70,000 years ago. Working with a few milligrams of bone powder, Krause made a stunning discovery. It turns out that the young lady he examined in 2009 “belonged to a previously unknown kind of archaic hominin.” Once you figure out that “hominins” are humans and our even older ancestors, it becomes clear we’re talking about a new branch of the family tree.

The missing link was from a group of individuals who were “on a separate evolutionary path from the Neanderthals.” The working hypothesis is that this group, called Denisovans (because the bone was found in the Denisova cave) grew up side by side with the Neanderthals from their common root in Homo erectus a million years ago, in Africa. This finding, needless to say, overturned the conventional wisdom about evolution.

And how about this? “We learned that early modern humans had encountered Neanderthals [in Europe] hundreds of thousands of years ago and had sex with them.” It’s all in the DNA, which doesn’t lie.

We used to assume that Neanderthals branched off from our African ancestors at most 400,000 years ago, but new evidence from Spain suggests that they actually arrived in Europe much earlier than that. The book is full of revelations like this. At the same time, it’s not fully a work of popular science, so there are passages that get a little dense.

The book includes helpful charts that show what a migratory species we are. An Ice Age, for instance, will make everyone—farmers and hunter-gatherers—want to live somewhere else. We learn that modern humans made it into Europe 40,000 years ago and, of course, multiplied. Everyone was apparently having sex with everyone else: modern humans with both Neanderthals and Denisovans. Another ancient girl the archaeogeneticists studied had a Denisovan father and a Neanderthal mother.

Our ancestors were creative. The book is illustrated with sculptures made 35,000 to 40,000 years ago, and a flute carved from a bird bone—the earliest musical instrument ever discovered. The history carries us from the early years through the Bronze Age (3300 to 1200 BCE) and beyond.

It’s amazing humanity made it this far. The earliest known bubonic plague occurred 3,800 years ago. There were Stone Age and Justiniac (541–549) plagues, and of course the famous Black Death (1346–1351). The book reveals that these plagues receded at times (we’re not entirely sure why) but never really went away. When people were sequestered in small hunter-gatherer groups, the plague would decimate only their clan. But then we built cities and started traveling from one to another.

Armies even used plagues as a weapon. It’s hard to shake the image of the Mongol-derived Golden Horde, in 1347, flinging infected corpses over the parapets of their enemies’ fortified cities.

“Today,” the authors write, “human beings, like bats, can be relied upon to spread viruses and bacteria widely throughout our now-gigantic, densely packed population.” Chilling thought. Small comfort can be found in the fact that our ancestors in ancient Europe lived in filthy conditions, with streets teeming with feces and rats everywhere. Of course, the actual culprits were seldom identified back then: the Jews were, as ever, convenient scapegoats.

Reading the Short History, one is left with a sense of how tenuous our modern society, the most comfortable in recorded time, actually is. It will be helpful if we learn from the past, but the evidence is otherwise. Since this is a book about DNA sequencing, it concludes with the possibility that we could be creating “designer babies” in the near future. But really that’s another story.