A Short History of Europe: From Pericles to Putin 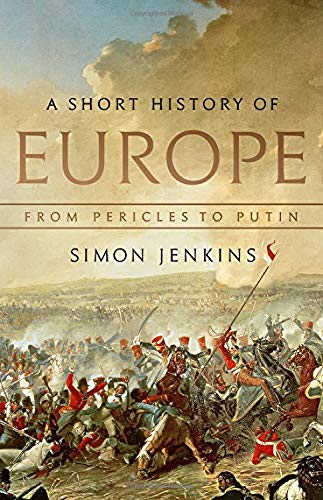 “Jenkins’ history is traditional in the best sense of that word. It is a broad, sweeping narrative that focuses on the struggles for power among European elites from ancient Greece and Rome to the 21st century.”

Short histories are by definition incomplete. They leave out as much or more than they include. They are not without value, however, especially when the author identifies important themes and provides a cogent narrative of major events and personalities.

Simon Jenkins, who writes for both the Guardian and Evening Standard in England, has written A Short History of Europe that attempts to cover more than 4000 eventful years in less than 400 pages. Jenkins’ history is traditional in the best sense of that word. It is a broad, sweeping narrative that focuses on the struggles for power among European elites from ancient Greece and Rome to the 21st century.

Europe is not a continent. Geographically, Europe is a peninsula at the western end of the Eurasian landmass. For most of its history, Europe hosted city-states, empires and nations that struggled for power and preeminence: Achaeans, Dorians, Athenians, Spartans, Macedonians, Greeks, Romans, Goths, Huns, Vandals, Franks, Vikings, Magyars, Britons, Russians, Spaniards, Dutch, Scandinavians, Portuguese, Venetians, Italians, Austrians, the French, and Germans.

Jenkins divides Europe’s history into broad time periods: the classical world, the Middle Ages, the rise and growth of nation-states, and modern Europe. Europe’s history, Jenkins writes, “has been dominated by the practice of war, and . . . by the processes by which wars are prepared and concluded.”

He ranks the Persian Wars of the fourth and fifth centuries BCE “among the deciding events of Europe’s evolution.” The Greek and Athenian ascendancy produced by those wars shaped the culture of Europe. It bequeathed to future generations the works of Sophocles, Euripides, Aeschylus, Aristophanes, Thucydides, Socrates, Plato and Aristotle. Jenkins writes that the achievements of the Athenian “Golden Age” presided over by Pericles “continue to tower over all other episodes in the European narrative.”

Greek political hegemony, Jenkins notes, died with Alexander the Great. It was succeeded by Rome, which began as a republic and grew to an empire that dominated the Mediterranean world and beyond. It destroyed Carthage in the Punic Wars, extended its frontiers to the English Channel and the Rhine as a result of the Gallic Wars, and under Octavian (who Jenkins surprisingly calls “the founder of modern Europe”), consolidated its hegemony in Europe.

It was during Rome’s ascendancy that Christianity was born and began to spread, eventually reaching every corner of the globe. Europe’s evolution is impossible to understand without a grasp of the concurrent evolution of Christianity in both its religious and secular manifestations.

Rome’s fall in the west (Byzantium, the Eastern Roman Empire, lasted until the 1400s) led to what historians have since called the “Dark Ages.” This coincided with the rise of Islam, which threatened to overrun Europe but was stopped by an army led by Charles Martel at the Battle of Poitiers in 732. The great historian of Rome, Edward Gibbon, concluded that Martel at Poitiers saved Western Civilization. Jenkins, however, doubts that Islam with its religious and political infighting, could have held onto Europe even if it was victorious at Poitiers.

A key event in Europe’s political evolution was the creation of the Holy Roman Empire in 800. “Its heartland,” Jenkins writes, “was the German-speaking areas of central Europe . . .  It had no capital, no army and no revenue.” It remained, however, a “feature of Europe’s political geography until its dismantling under Napoleon in 1806.”

Europe meanwhile was affected and threatened by a series of migrations from the east, while modern England began to take shape when William the Conqueror won the Battle of Hastings in 1066. This latter development initiated the evolution and political growth of the English-speaking peoples, the development of the common law, and the notion of limited government and the rights of the individual.

Europe, Jenkins notes, gradually evolved into separate nation-states that repeatedly struggled for power and territory, while Christianity divided into Catholics and Protestants for both religious and secular reasons. Some of the wars fought by the nation-states were religion-based, but eventually reasons of state superseded religious identity.

Russia, after throwing off the Mongol yoke, emerged as a great power in the east—part European and part Asian. Jenkins describes the growth of Habsburg domains and the perennial struggle for predominance in Europe between the Habsburgs and France, with England gradually emerging as the “holder” of the European balance of power.

From the 16th century to the 20th century, aspirants to European hegemony were repeatedly defeated by coalitions of lesser powers. The wars got bigger and the stakes got higher as science and technology increased the military power of nation-states exponentially.

The age of European exploration and discovery—what Halford Mackinder called the “Columbian epoch”—resulted in imperialism and colonial expansion, with Spain, Portugal and the Dutch leading the way, only to be bested by the British Empire. “[B]oundaries were being drawn by European governments,” writes Jenkins, “as if the globe were their plaything.”

As the world began the 20th century, notes Jenkins, “Europe held half the world’s population under its sway and controlled eighty-five per cent of world trade.” It was, in Jenkins’ words, “the climax of the age of Empire.”

Though Jenkins does not phrase it this way, Europe’s decline and eclipse by non-European powers is the great political story of the 20th century. Halford Mackinder was among the earliest observers to foresee this development. In 1902, he wrote that politically the future belonged to vast continental-sized powers with huge and growing populations and plentiful resources. Even earlier (1835), Alexis de Tocqueville predicted a bipolar world contest between America and Russia.

The two world wars of the 20th century resulted in what Hajo Holborn called the “political collapse of Europe.” It is not clear that Jenkins sees it that way. Europe has been at peace for almost 75 years, and for the foreseeable future should remain at peace. Jenkins hopes the European Union will evolve into a “multi-tiered, multi-valent confederacy.” He suggests the Holy Roman Empire as a model.

Jenkins rightly worries, however, that Europe’s liberal qualities and its mix of “regulated capitalism and social welfare” are becoming less of a beacon of hope to the rest of the world. The rise of authoritarian China, the reemergence of autocratic Russia, and the steadfastness of militant Islam evidence the limited appeal of the European way.

This highlights one of the major themes running through this book: that while Europe produced the Renaissance, the Enlightenment, the age of reason, the rule of law, limited government, and a scientific and industrial revolution, human nature has changed very little over the course of 4000 years.