Shorefall: A Novel (The Founders Trilogy) 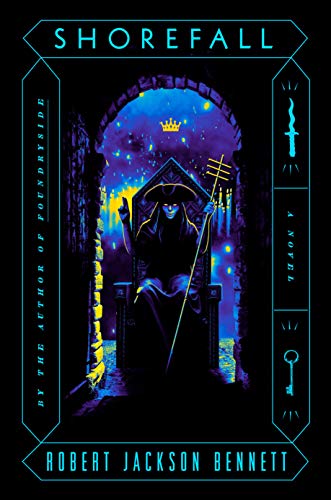 This is the second book of the series that started with Foundryside, one of the best fantasies of 2018. The first book followed the story of Sancia Grado, a talented thief with special skills and a damaged past, in a magical world where specially engraved plates can convince reality to behave differently for a while.

Shorefall takes the story into darker places by introducing a magic of unprecedented power with a cost: it requires people to be killed. This means those willing to kill can wield more power than those with moral scruples. The main villain in this story is willing to kill—a lot. The story turns bloody as first dozens and then hundreds of people are killed, often in gruesome ways.

This grisly plot concept gives Shorefall a different feel than Foundryside. The first book, despite Sancia’s horrible past and some powerful villains, maintained a lighter tone, with fun capers and the delightful relationship between Sancia and Clef. Unfortunately, Clef appears hardly at all in this book, and charming wit is in shorter supply than corpses.

With the darkness, however, comes some serious themes. Sancia and her friends have dreams of changing the system, stealing power away from the corrupt campo elites and making magic available to all. They believe those in power are evil, and by upsetting the balance of power they can bring justice and fairness to the city.

The villain, however—a being of immense power who is hundreds of years old—has seen this same cycle of power and revolution over and over. “Time and time and time again, I have tried to give humanity what it needs to better itself. And time and time and time again, they choose factionalism, war, and slavery.” His experiences have told him that humans are hopelessly corrupt, and no matter how well-meaning they gain power, they will always use it for evil. “You cannot trust people to use their innovations compassionately. You cannot give them the choice of morality. You must force them.”

This bleak assessment of humanity rings true in our own human history as well as in the history of the novel. Sancia herself is almost convinced at times that the villain is right, and no solution is possible for this dilemma. Tipping the balance of power only puts different people on the controlling side of injustice.

The novel ends with disaster for the city, and with that essential question unresolved, although there is a glimmer of hope: a magic that allows two people to be “twinned,” sharing the same experiences, memories, and thoughts as if they were temporarily one person. This possibility suggests that although revolution cannot alter humanity’s intrinsic nature, perhaps the ability to truly see others as they are might offer the possibility for lasting change.

A third book is clearly required to bring the series to conclusion. If the first two books are any measure, the third promises to raise thought-provoking issues with likable characters, a creative magic system, and clever action sequences. It will be interesting to see if Bennett continues to emphasize the darkness of human nature or if he will find a path to justice and hope.