Shooting Lincoln: Mathew Brady, Alexander Gardner, and the Photographs That Electrified a Nation 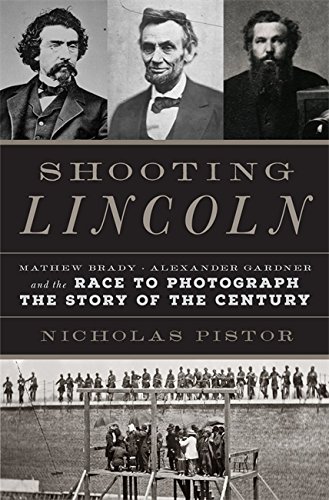 "The result is an enlightening telling of America's most famous killing."

The American Civil War had such horrors on an unimaginable scale that lesser tragedies go overlooked. Author Nicholas Pistor, for example, wrote that the new technology of photography "was becoming just as powerful as men with pens" but only a tiny fraction of those pictures survive. "No one wanted them—or, at least, no one wanted to pay for them."

Abraham Lincoln's notoriety preserved his images, aided by his fondness for the product of the camera and his martyrdom. The reader could wonder if Lincoln had so many photographs made out of fear of historians forgetting the real man.

Lincoln early in his career complained that he would not mind dying if only he had done something worth remembering. The president had lost his mother, his true love, and two of his sons. No one could have hated ignoble death more.

When his time finally came, Lincoln took full advantage of his fame. His speech at Cooper Union in Manhattan began his road to the White House but Matthew Brady, who photographed the up and coming, claimed that the photograph he made of the man that same day "made Lincoln president."

It was an age when a single photograph could launch a career in the way that a movie or a television appearance could now. When Brady's studio in New York did the popular likeness of singer Jenny Lind, for example, it "became a full-fledged event" in itself.

Ironically, just as Brady borrowed from his neighbor P. T. Barnum's freak show to promote his celebrities, right wing pundits today use such popular images from the past to try to rewrite history. They invent falsehoods about the past to justify partisanship in the present just as the original images 150 years ago made public figures.

In Shooting Lincoln, Nicholas J. C. Pistor, however, has no such political agenda but tells the story of the assassination and hunt for the killers of Abraham Lincoln through photography. The result is an enlightening telling of America's most famous killing.

Pistor points to the curious irony that Lincoln, "the man who pioneered the use of photographs to develop his political persona cared even less about how he looked." His secretary John Nicolay wrote that there were many pictures but no portrait of the complicated face that even Lincoln said was ugly.

These photos use Lincoln as a metaphor for the war. As Pistor writes, the president "wore the scars of war on his rugged rail-splitter flesh" and "even the bags under his eyes resembled the piles of bodies stacked on Civil War battlefields."

Those last photographs were to have helped a portrait painter with a work that the president was too busy to sit for. In the greatest of ironies, the same photographer Alexander Gardner provided photographs of John Wilkes Booth used in the posters of Lincoln's assassins.

Metaphor aside, the reader is treated a good factual thought provoking read about the president and his photographs. At times, it is special access with the characters as a real people.

Shooting Lincoln is largely about the photographers, notably Alexander Gardner, the "burly Scottish immigrant with a wild beard" and Anthony Berger "a former locksmith." Their work was too often falsely credited to the famous Matthew Brady "who knew how to get credit" and knew photography but little else.

Brady tried to photograph the first battle of the Civil War, Bull Run, but the fighting wrecked his camera. Ironically, the great victory he believed would happen that day turned into a defeat and rout of the federal army.

"His legacy secure," Brady then largely left the fieldwork from then on to others working in his especially designed wagons. "The action of battle proved daunting for the cumbersome equipment and complicated process required to take pictures," however.

Brady exploited the death and destruction of the Civil War battlefields, the largest part of what survives as images of that conflict. Nonetheless, his success cost him more than the profits he made from exhibition and publication.

Gardner made the photographic record of the Lincoln assassination. By then, he saw through "the Brady myth" and that he was "working for a famous man's brand," a realization reached by other uncredited employees of the Brady studio.

By then a rival, Gardner was a true battlefield photographer, spy, and pioneer in modern intelligence operations. The battle of Antietam and the hanging of Captain Henry Wirz also receive attention in Shooting Lincoln. Perhaps Pistor will further explore photography as meaning and metaphor in the Civil War in future books.