Shocked: My Mother, Schiaparelli, and Me 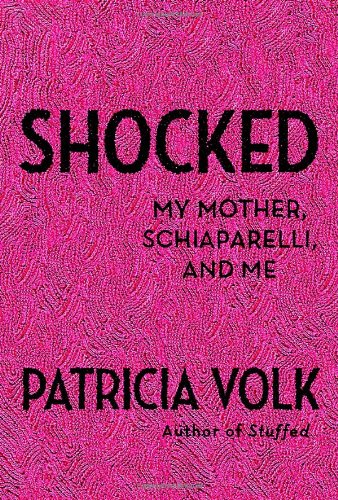 “Shocked: My Mother, Schiaparelli, and Me is a brilliant thing, well considered, well wrought, and wonderfully well written.”

At the beginning of her new book Shocked: My Mother, Schiaparelli, and Me author Patricia Volk offers an intriguing premise: that each of us during childhood, usually somewhere between the ages of ten and twelve, happens upon a book whose contents prove transformative. A book that suggests that we need not follow any path in life set before us by parents, teachers, or others in authority, but may instead find both success and happiness by blazing our own trail.

At the end of her book, Ms. Volk kindly lists some of the transformative books of notable persons. And we learn that for President Barack Obama, that book was The Power Broker by Robert Caro. And for his wife Michelle Obama it was Toni Morrison’s Song of Solomon. And for Hillary Clinton it was Orwell’s 1984. And that for Elvis it was The Prophet. For Steve Jobs it was Moby- Dick.

In between the premise and the lists, Patricia Volk offers the beautifully rendered story of her own life, of her all-important relationship with her mother, and of the book that was, for her, a touchstone.

“What do you do when you’re little and know you can’t be like your mother? I adore and am proud of my mother, but what she wants from me is blind adherence to the mystifying virtue of ‘seemly’ behavior. Why must I sit with my ankles crossed? Why does she pinch my cheeks with rouge on her fingertips as I leave the apartment? Why are her parting words ‘Don’t be loud!’? In a race with a boy, I have to let him win? Why does she care so much about how I look? When I get home from a party, her first question is: ‘Where you the prettiest girl there?’ Is there a way to answer that doesn’t make you cringe?

“You don’t agree with what you mother thinks is important. You don’t want to care what she thinks. At the very least, you’d rather care less . . .

“You want to be you, whatever that is, not your mother’s idea of you. You don’t know what it takes how much of it is luck. You suspect you’re going to be all right in the world. You hope you are. You yearn for a signal. You’re ripe for it. Sometimes it comes from a teacher. Or a relative. It could be a situation that shows you something about yourself you didn’t know. Sometimes it’s a book.

In a marketplace sodden with memoirs, may of which feature some horrific variant on “mother”—crazy mothers, druggy mothers, icy mothers, violent mothers, criminal mothers—Shocked stands out both by virtue of it premise (that wonderful word that carries the freight of it, the idea of “defusing” the impact of the parental bond) and because of the incandescence of its language, as here, in this Instagram of a memory of a mother seated at her vanity:

“My mother touches the long frosted dauber to her pulse points—the places blood flows closest to the skin, hence her warmest external places, where the scent heats most and disperses widest—the inside of her wrists, behind her ears, and the back of her knees. In the evening, if she is going out, she dabs below her neck . . .

“The name of the perfume is ‘Shocking.’ It is made by Elsa Schiaparelli (SKI-AH-PA-RAY-LEE). I know it is special. Every year on my mother’s birthday, my father gives it to her, every January 21 the same gift. Late at night, after closing our family’s restaurant, he opens the door to our bedroom. ‘Get up, girls!’ He shakes my sister and me awake. We follow him down the hall, past the locked linen closet, into their bedroom so we can witness the event. Every year my mother is surprised. Every year she is thrilled.

“’Oh, Cecil!’ She clasps her hands under her chin. ‘Really, you are much to extravagant!’

“She throws her arms around his neck and kisses him. Raises one foot behind her, pointing her toe like she does when they dance. She balances against him, smiling down at her daughters. ‘Girls, I hope you know: Your father is the most generous man in the world!’

“Then my father says to us: ‘Isn’t your mother the most beautiful woman in the world?’

“’Shocking.’ The smell of my mother.

“Always the perfume comes gift-wrapped. My father makes the paper himself. He uses Scotch tape and as many hundred-dollar bills as it takes to get the job done.”

This passage tells so much. That this is a family that largely speaks in exclamation points. That Cecil and his wife Audrey enjoy a sort of Ronnie and Nancy Reagan romance in which the children are oddly ancillary. And that this all takes place some time ago, in an era in which perfume was packaged in “presentations,” in a place of some sophistication that turns out to be the Manhattan featured in The World of Henry Orient.

As the chapters flash by, each begins with the parallel tracks of “wisdom” laid down by the two ladies in question, the mother, Audrey Volk, and the “mentor,” Elsa Schiaparelli, such as when, on the subject of books, the mother asks, “Darling, can’t you see what I’m reading?” while the mentor remembers, “My father’s private library became my haven and my joy. I found, within the pages of rare and priceless book, a dream world of ancient religions and the worship of the arts.”

Indeed, Ms. Volk could have done far worse than Madam Schiaparelli when it comes to gurus. In that she was both innovator and artist, businesswoman (she owned her fashion house outright, while such luminaries as Coco Chanel controlled only a small fraction of their businesses) and fashion icon, she presented the perfect visionary counterpoint to the mother’s voice, as she explained how to select the best fur pelts when having a mink coat tailor-made or ordered her daughter to sit up straight.

Which makes all the funnier, all the sharper and all the more telling this moment, when the two of them, the mentor and the mother, come together, if only electronically:

“We are watching What’s My Line on television. The Mystery Guest signs in. A sweeping ‘S’ is formed by a gloved hand loaded with bracelets. I’m riveted. I know that ‘S’ from Audrey’s bottles and boxes. Could it be? A ‘C’ connects to the ‘S,’ then an ‘H,’ then ‘Schiaparelli’ in white chalk fills the blackboard.

“The three of us, Audrey, [my sister] Jo Ann and I, sit next to each other on the couch. Elsa Schiaparelli is drenched in jewelry as if she’s risen from Captain Cook’s treasure chest. Elsa Schiaparelli! Our TV is black and white, but in my heart I know her shiny strapless dress and matching hat are Shocking Pink. Audrey plucks a Pall Mall shred off the tip of her tongue. She leans in as the Mystery Guest fields questions. Schiap tries to disguise her voice, but her laugh doesn’t sound American. My sister and I are glad Dorothy Kilgallen has been replaced for the evening by Faye Emerson. We are sure Dorothy Kilgallen cheats. We are sure that when Miss Kilgallen raises her tiny chin she’s peeking under the blindfold. After a few rounds of questions, Bennett Cerf closes in: ‘Would it be safe to say that you are based in Paris?’

“’You are gay-ting hot!’ Schiap says.

“Cerf nails it. The panelists fling off their masks. Schiap rises from the guest chair, sashays over to the panelists and, bowing slightly, shakes their hands.

“’Humpf!’ Audrey says. ‘Look at her back in that dress! Didn’t anyone tell her? How could she not know? She’s too old for a strapless! And that jewelry! She looks like Astor’s pet horse. And frankly, girls, if you ask me, that hat doesn’t work. Not at all!’”

But while Schiaparelli provides the dream, it is the reality of the toxic relationship between Audrey and Patricia Volk that resonates. Especially here:

“Parents can’t be friends. It’s not a level playing field. But as some point, with any luck, you enjoy their company in an easy way. Nobody needs the upper hand. I have this with Cecil, working alongside him in his studio, welding and soldering, making repairs. Drawing and painting. On his motorcycle, we pursue a favorite activity—the quest for clams—steamers, stuffed, fried, chowerized, chewy cherrystones or pearly littlenecks, Clams Casino, Clams Oreganata, Clams Posillipo, bellies and strips, spaghetti con vongole—clams in any form. Once in a while, lying next to Audrey in her king-size bed, staring at her ceiling, holding hands, we have stretches like this too. I can ask her anything and she’ll tell me. Always I am courteous. Deference is nonnegotiable. ‘Tone of voice’ ranks uppermost on Audrey’s List of Requisite Behavior. And much of Requisite Behavior has to do with her definition of ‘respect.’ Which makes it all the more puzzling why Audrey treats her own mother a way she wouldn’t in a million years tolerate. This is the central mystery of childhood: Why am I expected to treat my mother with deference, yet it is all right for my mother to reduce her own mother to tears? She rages at Polly. She bullies her. She’s outright mean, and it kills us.”

It is hard to image that any reader, especially a female reader, will be able to finish Shocked without a match being struck to the dry tinder of their own memories of childhood, setting things ablaze. Shocked: My Mother, Schiaparelli, and Me is a brilliant thing, well considered, well wrought, and wonderfully well written.