The Shock of the Anthropocene: The Earth, History and Us 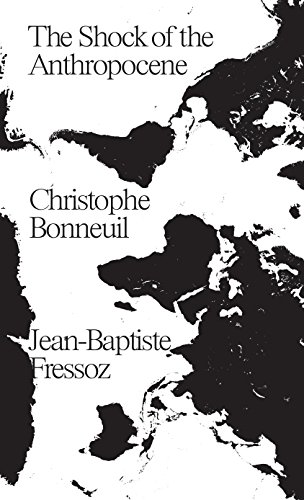 “The Shock of the Anthropocene is a detailed, data-driven, and well-argued critique of conventional thought [about the ecosystem] . . .”

The Shock of the Anthropocene provides a broadly synthesized yet fine-grained, data-driven analysis of the human footprint on our earthly ecosystem. Leaving behind the relatively calm, sedate Holocene (starting 11,500 years ago) the Anthropocene (hereafter Acene) is portrayed as having a highly unpredictable but undoubtedly grim future where there is no return to some nostalgic natural past.

We could argue about the Acene’s start. Human-driven emission of greenhouse gases coincides with increased harnessing and use of energy per capita—think here of the major productive revolutions (agricultural, industrial, etc). Most commonly the Acene is associated with the advent of the coal-fired steam engine that came into widespread use in the 19th century. It is the ability to harness and transform new greenhouse-gas-emitting energy sources that propelled the Acene to its current state in the early 21st century.

The authors note that the cultural foundation that led to the rise of the Acene is an industrial revolution version of the enlightenment wherein humans are seen as free and autonomous from an environment that they can dominate through science and technology. Thusly framed, the environment becomes the object of extraction in support of human endeavors, and its degradation characterized as “externalities” (i.e., the hidden costs of production, such as pollution, erosion, or labor exploitation).

This anthropocentric cultural foundation creates a worldview that directly feeds into an accelerating Acene. First, it pairs nicely with global capitalism and its emphasis on limitless expansion that supported economic imperialism. Increasingly violent, destructive wars are an entailment of these imperial designs. Wars are wild energy consumers and environment destroyers through the production of its machinery and their violent deployment.

Second, mass consumption, especially noteworthy in the post-World War II era, has driven a globally integrated system of the production of commodities that is further supercharged by culturally grounded notions of entitlement, convenience, and obsolescence. Add to this the invention of suburbs and a car culture.

Exacerbating the matter, the post-World War II era has been flush with money that has stoked consumer debt and the engine of capitalism. The Acene, as you might suspect, has a distinctly western origin but whose effects are disproportionately felt in the poor global south (e.g., natural disaster related human displacement).

Finally, this too plays out in the world of research in which the social sciences championed the study of people apart from nature while earth sciences jettisoned humans from their scope of study.

Anthropology provides one qualified exception in which less complex societies were seen as shaped by their environmental circumstances. Generally, the social sciences would not make that same claim on a modern, industrial counterpart. Western society, thus, became conceptually tone deaf to the intimate relationship between humans and their environmental surroundings.

The authors suggest that the narrative of the Acene can be broken down into three main stages. The first starts with the Industrial Revolution and culminates with the end of World War II. This is an economic era with coal power as its central feature.

The second stage, known as the “great acceleration,” runs through the year 2000 and is characterized by even greater dependence on fossil fuels as domestic and global economies expand and flourish.

We are currently riding the wave of the third stage, which remains carbon-based but characterized by a rapidly growing awareness of the tremendous effects of humans on the environment.

In another popular and very enlightenment turn there is an emerging grand narrative about the role of scientists as a new and heroically infallible layer of governance. This potentially translates into science as new religion: “[h]umanity will become ecologically sustainable when the science message has properly penetrated it and humanity has adopted its solutions.”

All hail science? Not so fast, suggest the authors. If the Earth is conceptualized as a cybernetic system with humans at the wheel, then we have yet again come full circle back to old enlightenment logics. Of course, it is hard for humans to resist the temptation this since we are placed squarely center stage in a valiant tale of righteous domination of Earth as colony.

In contrast, we could envision Earth as a complex, nonlinear dynamic system. The authors argue that this suggests wholesale unpredictability. It is more like free-form jazz—there are clear boundaries (there is a limit to the sounds instruments make that can then be combined and recombined in many different pathways forward). If you know all the variables, you can make predictions about pathways and outcomes much like predicting the path of a hurricane; however, as we know from hurricane path simulations, even seemingly minor tweaks to relevant variables can lead to quite different outcomes—hence, seeming unpredictability.

But the authors hardly discount what science can bring to the table. Scientific data and interpretation will, necessarily, be foundational and move into the sphere of politics to catalyze (hopefully democratic) discussions about policy, regulation, and proper stewardship.

The authors end with a thoughtful ambivalence, well aware of the existing corporate, political, techno-scientific, military-industrial institutions that shape thought, organization, and practice in the service of a commodity logic and global capitalism.

The Shock of the Anthropocene is a detailed, data-driven, and well-argued critique of conventional thought on enormity of the challenges and changes that lay ahead for humanity on an Earth that is irreparably damaged by our actions. It should be a central addition to readers’ climate change libraries.