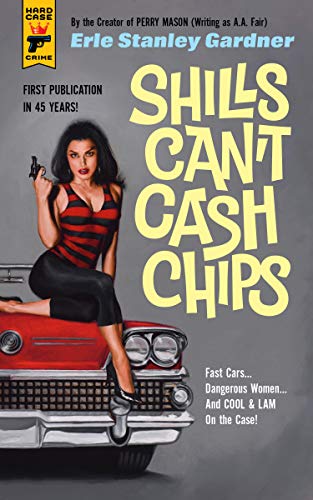 Donald Lam is at it again! This time the diminutive detective finds himself surrounded by beautiful women with questionable motives when an apparently simple insurance investigation into a car accident turns into murder and mayhem.

Roped into the case by his partner, Bertha Cool, Donald poses as an ex-con to infiltrate a circle of confidence artists and real estate speculators in order to find out what really happened at the corner of Seventh and Main Streets on August 13th, and why people are dying as a result.

Shills Can’t Cash Chips is one of 30 Cool and Lam mysteries written by Erle Stanley Gardner under the pen name A. A. Fair. It was originally published by William Morrow in 1961 and was reprinted in paperback by Pocket Books in 1963, going through several printings before being picked up by Titan Books 45 years after its last appearance on the bookshelves for this new Hard Case Crime reprint edition.

The bestselling American author of the 20th century at the time of his death, largely thanks to the enormous popularity of his 80-plus-titles Perry Mason series, Gardner found in Cool and Lam an alternative to his famous courtroom-centered legal thrillers, focusing on Donald’s surprising courage and intuition rather than Mason’s trial dramatics and his constant flirtation with disbarment.

Cool and Lam are characters that run delightfully counter to type. As the principal owner of the firm, Bertha is “a hundred and sixty-five pounds of bulldog tenacity, hair-trigger temper, greediness and shrewd observation; an explosive combination of characteristics that were rendered somewhat less obnoxious by an underlying loyalty when the chips were down.”

Donald, on the other hand, as described by Bertha to their client, is “young and little but the bastard has brains.”

Gardner clearly has specific grooves in which he feels comfortable writing. For example, in this story Donald has moved somewhat closer to his secretary, Elsie Brand, than in earlier novels. Their relationship is now similar to that of Perry Mason and Della Street, where Elsie trusts Donald implicitly, and he involves her in somewhat risky aspects of the case.

As well, Donald and Mason are both close-mouthed about their intentions in an investigation, and the narrator enjoys leading the reader to believe that they’ve crossed the line into unethical, if not illegal, behavior before pulling their irons out of the fire at the last moment.

The two are as different as chalk and cheese in most other respects, though. While Perry Mason can mix it up with the bad guys and possibly win a round or two, poor Donald knows full well that when the fists start to fly he’s going to come out of it with at least a concussion and a split lip. It’s part of the fun Gardner has with a private eye who’s hard-boiled and an overmatched little shrimp at the same time.

Readers who are new to Cool and Lam will enjoy this novel, along with The Knife Slipped, The Count of 9, and Turn on the Heat, three other titles reprinted by Hard Case Crime. It’s a series that’s fun, entertaining, and addictive.

Readers familiar with the series, on the other hand, will be pleased to add a fresh reading copy of Shills Can’t Cash Chips to their crime fiction library. Those of us with copies of the vintage Pocket Book paperback editions will be grateful that we can now leave them in their protective sleeves in favor of this delightful new iteration that comes complete with an original new cover painting by Laurel Blechman, which is perfectly in tune with the genre and the time period.

It’s that kind of story. That kind of series! Every year or two, each novel is taken from the shelf one by one for another read, just for the fun of it. Brain candy. Reading for pleasure as it’s meant to be.

Each time through, however, the pages seem a bit more brittle and the binding a little chancier. They must be held carefully and the pages turned gingerly, as time has definitely not been kind to most vintage paperbacks we love and cherish in our collections. No surprise, then, that a fresh reading copy with modern printing and binding is such a welcome treat.

Once again, Hard Case Crime breathes new life into a classic crime fiction novel, and for that, aficionados of the Cool and Lam series rise to their feet to applaud another job well done.